Ayatollah Ahmad Jannati has been elected to head Iran's Assembly of Experts, the body that will choose the next supreme leader of Iran. 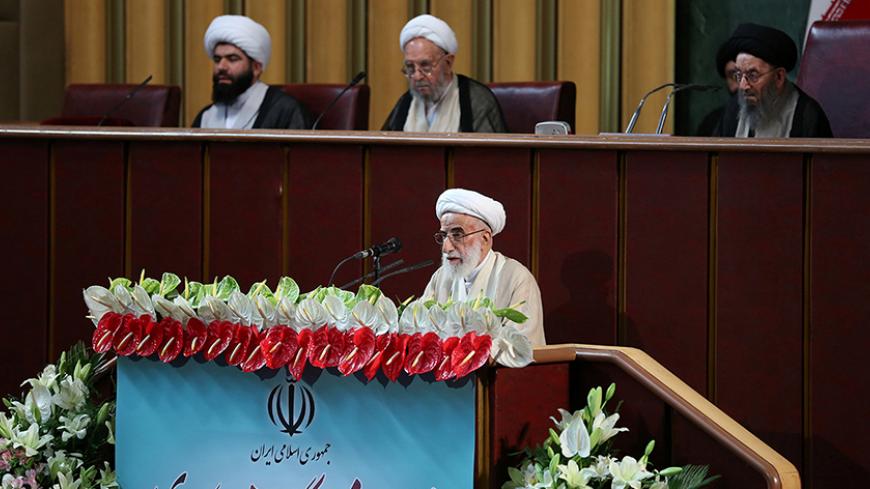 Ahmad Jannati, the head of Iran's new Assembly of Experts, speaks during the assembly meeting in Tehran, May 24, 2016. - REUTERS/President.ir
Arash Karami
@@thekarami
May 24, 2016

Hard-line cleric Ayatollah Ahmad Jannati was elected to head Iran's Assembly of Experts May 24 with 51 of the assembly members' 86 votes. Jannati will head the body tasked with picking the supreme leader for two years before another round of elections.

Ayatollah Ebrahim Amini, who was the favored candidate among the Reformist media in this morning’s newspapers, came in second with 21 votes. According to Reformist newspaper Arman Daily, Amini was “the closest figure to Rafsanjani’s moderation and political platform.” Shargh Daily reported that “Amini’s chances are higher than the other choices” to head the assembly.

Ayatollah Mahmoud Hashemi Shahroudi came in third with 13 votes. Ayatollah Mohammad Ali Movahedi-Kermani and Shahroudi were chosen as first deputy and second deputy, respectively. Ayatollah Ghorbanali Dorri-Najafabadi and Ayatollah Ahmad Khatami were elected as secretaries of the board of directors of the assembly.

Missing from the election for the leadership was Ayatollah Akbar Hashemi Rafsanjani. He led the assembly from 2007 to 2011 but lost the position after a falling out over the 2009 presidential election. He tried unsuccessfully to regain the leadership in March 2015. Ever the strategist, Rafsanjani may have only volunteered to run in the 2015 leadership election to circulate his name in the media ahead of the February parliamentary election. On May 19, he told Aftab Yazd newspaper, “I do not intend to present myself for the leadership. … It is not necessary to head [the assembly], and for me to be a member is good.”

Rafsanjani's decision was surprising, as he had won the most votes in Tehran for the assembly and Jannati, who was just elected, received the least votes from Tehran. Jannati’s victory is also surprising because after the Tehran vote, the moderate list dominated, even excluding the two hard-liners Ayatollah Mohammad Yazdi and Ayatollah Mohammad-Taghi Mesbah-Yazdi, much to the displeasure of Supreme Leader Ayatollah Ali Khamenei.

It is unwise to read too much into the contest, but at the very least it means that the Tehran vote is not always indicative of the voting patterns of the rest of the country. Also, despite a high voter turnout for the February Assembly of Experts election — which coincided with the parliamentary election — conservatives and hard-liners still hold enough seats to elect Jannati to head the assembly. The assembly members may be asked to choose the next supreme leader should the 77-year-old Khamenei pass during their eight-year terms. Of course, much of the process to pick the next supreme leader will take place behind the scenes and various powerful institutions will attempt to exert influence on the members. Still, according to the constitution, the assembly members must ultimately cast the decisive vote.

Perhaps choosing to play the long game, Rafsanjani showed no displeasure with the final results of the vote. “The election for the leadership board was conducted very well,” he told reporters May 24.

Addressing the assembly after the vote, Jannati reminded all the members that they must “accept with heart and tongue” the guardianship of the jurist, Iran’s form of government. Jannati added, “In all of my years of service — this point must be emphasized — we should work under the shadow of the supreme leader in a way that God, the leader and the people are satisfied.”