Even if hard-liner Ebrahim Raisi wins, reviving the nuclear deal with the West could gain traction. 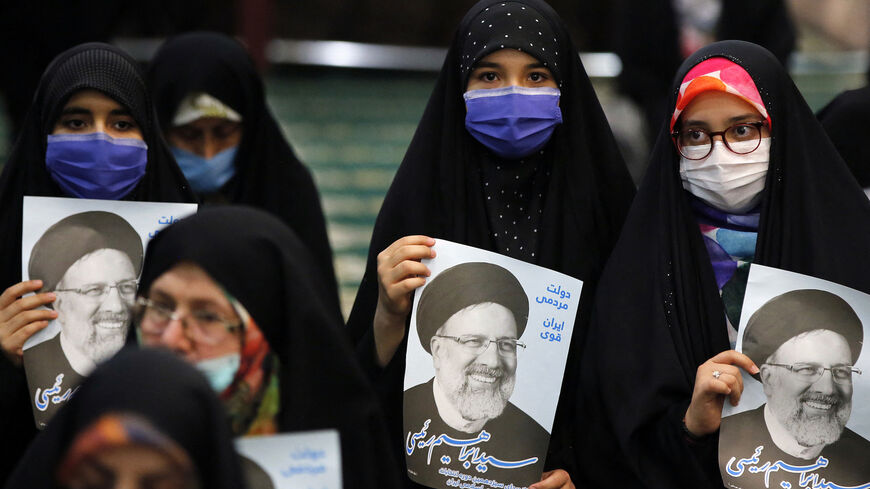 Supporters of Iranian presidential candidate Ebrahim Raisi hold posters of him during an election campaign rally in the capital Tehran, on June 10, 2021. - AFP via Getty Images

“The people’s support of the system must be shown to the enemy," he declared, as polls signal that only about 40% of the Iranian electorate will vote. The final tally is expected to be well below the 73% turnout in the 2017 election, and may be the lowest ever (as we report here).

Iranians’ apathy is fed by the persistent malaise in the economy in recent years, due in large measure to the US sanctions imposed after President Donald Trump pulled out of the so-called Joint Comprehensive Plan of Action (JCPOA) in 2018, suspending the terms of a deal that was meant to end Iran’s nuclear weapons program. On top of that, many people sense that the fix is in regarding the outcome of the elections under Iran’s theocracy.

The conventional wisdom is that Iran’s hard-line chief justice, Ebrahim Raisi, is all but assured victory. The latest polls have him getting 64% of the vote, although some Reformists (which, unlike the conservatives, have been unable to agree on a candidate) are trying to make a late rally around Abdolnaser Hemmati, a former central bank governor and ambassador to China, who is polling this week at only 4.2%.

The lost element of surprise?

Iran’s elections have never been "free and fair" by any Western democratic standard, with all candidates vetted well in advance by the Guardian Council, an instrument of Khamenei’s influence and control.

Nonetheless, Iran’s presidential elections have delivered surprises in the past.

In 1997, Reformist Mohammad Khatami defeated the heavily favored speaker of Parliament, Ali Akbar Nateq-Nouri, in a world-class upset. Turnout was 80% and most of the vote went for Khatami. There was hope at the time that the revolution, approaching 20 years, would shed its ideological rigidity.

And then the moment, slowly and disappointingly, passed.

As Fouad Ajami wrote in 2010, "Those expecting a quick deliverance for the people of Iran never fully took in the power of the regime and its instruments of repression."

Khatami served two terms, but his reform agenda was boxed in by the state and undermined, in part, by his own unwillingness to push harder for reform when the people had his back.

In 2005, Iran’s presidential elections brought another surprise. Former hard-line Tehran Mayor and populist Mahmoud Ahmadinejad won a runoff with former president and longtime revolutionary and regime insider Akbar Hashemi Rafsanjani. Nearly two-thirds of Iranian voters turned out in the first round, 59% in the second.

Ahmadinejad was a populist, but he knew where the power in Iran resides — with Khamenei. Ahmadinejad crushed a popular uprising in the summer of 2009, in a way foreshadowing state reactions in the region to what became known as the Arab Spring less than two years later.

Ahmadinejad also was a proponent of the Islamic Revolutionary Guards Corps, whose power and influence increased on his watch. His outsider populism, sometimes bizarre political style and anti-corruption diatribes came to unsettle the establishment. He outraged the West with his Holocaust denials and seemingly casual threats to destroy Israel. This year the Guardians disqualified him from running.

Rouhani and the reformers went down with the JCPOA

Ahmadinejad’s successor, two-term President Hassan Rouhani, considered the Joint Comprehensive Plan of Action (JCPOA), or Iran nuclear deal, his signature achievement. It was, arguably, the Islamic Republic’s greatest foreign policy accomplishment to date, resetting Iran’s relationship with the West and proving popular with Iranians. The Iran nuclear deal is why Rouhani sailed to reelection in 2017.

Trump’s abrupt withdrawal from the deal was a death blow to the Reformists who supported Rouhani, who was blamed for the resulting economic calamity. The US withdrawal gave vindication to the hard-linerswho had said the West could not be trusted. The conservatives, or Principlists as they are known in the Iranian context, took the overwhelming majority of parliament seats in the 2020 elections and set the stage for Friday's anticipated landslide.

The economy will be the top issue in the election for Iranians, who want relief from high inflation and a decline in purchasing power, writes Bijan Khajepour.

Most of what the candidates have said about the economy, however, is little more than campaign sloganeering and "populist promises such as increasing the amount of the monthly handout that the majority of Iranians receive from the government," writes Khajehpour.

"The majority of the country’s economic deficiencies are a direct consequence of a political structure that impedes technocratic approaches and paves the way for politicized economic and trade decisions," Khajehpour explains, "while the country’s resources are subject to ongoing bargaining processes between interest groups."

Nonetheless, maybe the biggest surprise for Iran, as we wrote here in April, is that despite US economic sanctions, a year of low oil prices and a disastrous response to COVID-19, Iran’s economy grew 1.5% in 2020 and is projected to expand by 2.5% this year, according to the International Monetary Fund, and would be boosted even further by high oil prices, currently at over $70 per barrel.

The US National Intelligence Council Global Trends report assesses that Iran "is better positioned demographically and has some economic and technological advantages, which may help it mitigate popular discontent."

Don’t rule out a return to the JCPOA

The key to any economic turnaround depends on a return to the JCPOA, Khajehpour concludes, something Trump’s successor, Joe Biden, plainly is trying to negotiate.

Despite his hard-line pedigree, Raisi has signaled in his few comments on foreign policy that he does not rule out a return to the nuclear deal. In the third and final presidential debate Saturday, Raisi said, “Let’s make it clear. We would definitely abide by the JCPOA in the format that was approved with nine clauses by the Supreme Leader [Ayatollah Ali Khamenei], as it a contract and a commitment that governments must abide by," as our Tehran correspondent reports.

Addressing his opponents, Raisi said, "You cannot implement the JCPOA. The JCPOA must be implemented by a powerful government. Foreign power is an extension of internal power."

"Raisi seemed to be saying he could implement the nuclear deal better than the Rouhani administration. If this were to happen, a significant portion of the internally organized opposition and sabotage of the agreement could fade away," our correspondent explains. "Raisi may have been telling the West not to worry about him assuming the presidency because he would abide by the commitments of the Rouhani administration."

In the United States, a change of presidents usually includes a slew of pardons. It may look to Rouhani to consider the same approach.

"US officials say they’ve engaged in indirect discussions — independently of the nuclear deal talks in Vienna — with Iran over unjustly detained US citizens, including Siamak and Baquer Namazi," who have been imprisoned since 2015, all on Rouhani’s watch, Elizabeth Hagedorn reports, "The White House says their release is a top priority, but Babak Namazi worries his brother, Siamak, and father, Baquer, could once again be left behind."