Iran's hard-liners have long been disillusioned with a system in which all citizens are encouraged to vote. 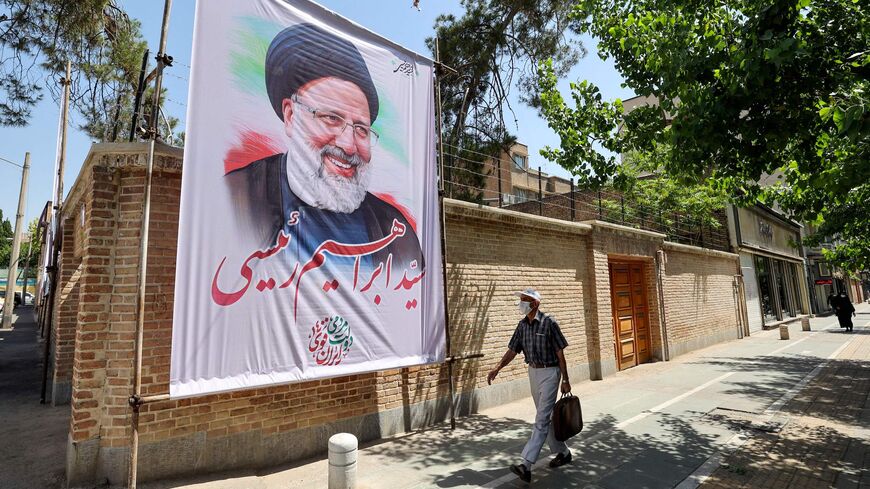 An Iranian man walks past an electoral poster depicting judiciary chief and presidential candidate Ebrahim Raisi in the capital Tehran, on May 29, 2021. - ATTA KENARE/AFP via Getty Images

Another presidential election is unfolding in Iran. Many observers expect a low turnout as many ordinary Iranians are either discouraged or disillusioned. However, those in power seem not to mind.

The political elite of the Islamic Republic of Iran had once considered elections a source of the regime’s legitimacy. According to them, Iranians who voted in the past polls approved the system and wanted to participate. However, it all changed when Iranians increasingly voted for the candidates not endorsed by the hard-liners. In 1997 Iranians surprised the political establishment by voting for the Reformist Mohammad Khatami. In the years that followed, presidential elections remained a point of dispute.

The hard-liners have begun moving away from a system in which all are encouraged to vote to one in which only the righteous do so. If only the “right” people vote in Iran, hard-liners and their acolytes can maintain the majority necessary to occupy political offices throughout the government. They have found a model political system that accommodates both the principles of Islamic governance and the need for legitimacy: the Communist Party of China.

Iranian hard-liners’ fascination with the Chinese model of governance is nothing new. However, it has gained new momentum in recent years. Hard-liners envy the dominance of China’s Communist Party and its centralized ability to act without objection. “Not every bum can vote in China; only the members of the Communist Party can vote,” said Ali Akbar Raefipour, a hard-line preacher whose lectures are often praised by news agencies controlled by the Iranian Revolutionary Guard Corps (IRGC).

Hard-liners like Raefipour claimed to represent Iran’s masses during the early years of the Islamic Republic, when most Iranians lived in rural areas. Today, they know the majority of Iranians would not vote for them. Two-thirds of the population live in urban areas and several cities have become truly metropolitan with diverse communities and sophistical regional economies. The traditional families of the 1970s are urbanites today, with children and grandchildren who long for a different lifestyle.

When the Islamic Revolution of 1978 succeeded in toppling the Pahlavi dynasty, Iran’s new revolutionaries sought a model to bring together Islamic principles for governance with democratic practices and institutions. They based their constitution on France’s Fifth Republic, with both a president and a prime minister. However, they also created a Guardian Council to protect Islamic principles and elevated a supreme leader. Ali Akbar Hashemi Rafsanjani, one of the founding fathers of the Islamic Republic, claimed Iran would become the Japan of the Islamic world: a technologically advanced country with a strong economy and deeply rooted cultural identity. He had personally visited Japan as a young revolutionary and believed Asian countries would become economic powerhouses.

Not everybody in the new political establishment shared Rafsanjani’s dream of an Islamic version of Japan. Nor did they care much for democratic practices. When the Iranian people chose Mohammad Khatami, a candidate running on a Reformist agenda, in 1997, they astonished the ruling elite. Rafsanjani noted in his diary a meeting with head of Guardian Council Ahmad Jannati, who told him he preferred lower participation guaranteeing victory for conservative candidates. When hard-liners succeeded Khatami in 2005, replacing his administration and many Rafsanjani loyalists, they enacted their vision of a powerful centralized government. They also expressed interest in the Chinese model of governance, with state control over the economy, politics and society.

Iran’s hard-liners have long given up the idea of representing the majority of the Iranian masses. They lost presidential elections to Reformist and moderate rivals in 1997 and 2001. In 2005, the people chose the populist Mahmoud Ahmadinejad, disfavoring Rafsanjani to once again surprise the political establishment. In 2009, the contentious outcome of Iran’s presidential polls prompted countrywide demonstrations known as the Green Movement and the outcome was contested to no avail. Following President Hassan Rouhani’s victories in 2013 and 2017, Iranian hard-liners gave up the hope of winning the popular vote in a free and competitive election.

Now, out of seven presidential candidates approved by the Guardian Council, five are hard-liners. The leading figure is Seyyed Ebrahim Raisi, a former presidential candidate and the current head of the judiciary. Two other candidates, Abdolnaser Hemmati and Mohsen MehrAlizadeh are considered Reformists, but neither is a prominent political figure with much chance of winning.

The ruling clerics led by Supreme Leader Ayatollah Ali Khamenei urge people to participate in the elections. However, many Iranians do not seem to have a favorite among the candidates, as Guardian Council did not approve any candidate who might bring out the popular vote. Mostafa Tajzadeh, the leading Reformist figure, and Ali Larijani, a moderate conservative with solid backing among the urban middle class, were rejected.

Low public morale amid the COVID-19 pandemic helped contribute to a record-low voter turnout in Iran’s recent parliamentary elections. Consequently, hard-liners, including many former members of the IRGC, won two-thirds of the parliamentary seats. The present speaker, Mohammad Bagher Qalibaf, served as an IRGC brigadier general, commanding the air force and later the Islamic Republic of Iran Law Enforcement Force.

Today, hard-liners see themselves as a righteous minority group ordained by their loyalty to so-called pure Islamic principles and to Khamenei. They no longer consider the will of the Iranian people a legitimate source of political power. In their ideal system, hard-liners will be both the electorate and the elected, as in China.

While the possibility of one-party rule in Iran remains a topic for further debate, one cannot say Iran’s political system is becoming a one-party show. A diversity of interests and agendas exists even among the hard-liners. The political agenda is set by reaching an agreement between different groups. Though hard-liners dream of the authority of the Communist Party of China, they might not be eager to trade their individuality for a one-party system.

Many consider the Chinese model of governance effective and efficient, avoiding the headache of elections and basing political agendas on public demands. However, it seems those who admire the Chinese model don’t appreciate that accepting social liberties, welcoming foreign investors and facilitating a competitive private sector have been the source of China’s fortune.

Such an omission may doom the Chinese model to failure in Iran. Though hard-liners wish for a unified and uniform system of governance in Iran, they might be ignoring what is needed for that system to succeed. One thing is clear: Iranian hard-liners are testing whether they can rule as the minority party elected by a minority and retain their legitimacy.