How Rouhani may be destroying his own Moderation camp

If Iran’s president continues to focus on his future rather than the present, his continued failure to fulfill his campaign promises is likely to herald the end of his political career. 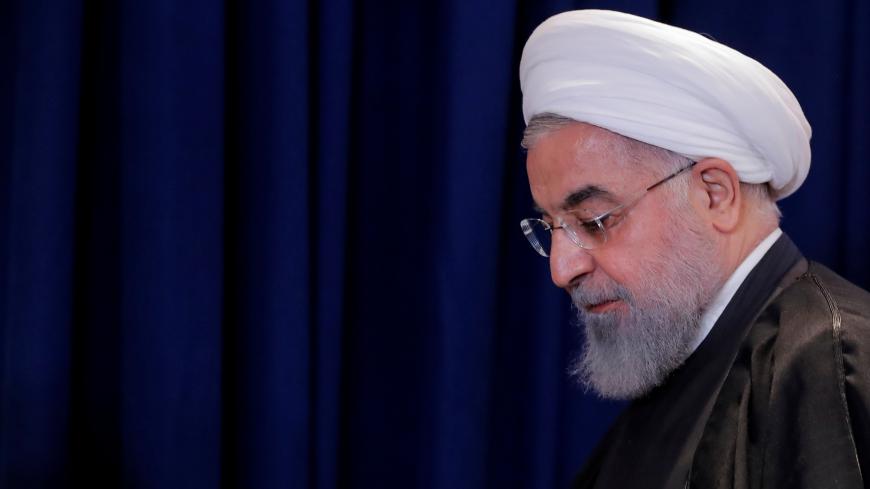 Iran's President Hassan Rouhani exits following a news conference on the sidelines of the 73rd session of the United Nations General Assembly at UN headquarters in New York, US, September 26, 2018. - REUTERS/Brendan Mcdermid

Twenty months after the passing of Akbar Hashemi Rafsanjani, the Moderation camp — which the former two-time president symbolized — is being undermined by his protege: Hassan Rouhani.

Although it officially came into being with Rouhani’s first presidential campaign in 2013 — choosing "Moderation" as his electoral slogan — it was actually founded by Rafsanjani, who passed away in January 2017.

Iran’s conservatives were largely unified until 2005 when then-Tehran Mayor Mahmoud Ahmadinejad sought to try his luck in the presidential elections. His candidacy was announced concurrently with the emergence of several hard-line groups within the camp that had played a significant role in the 2003 city and village council elections, which handed Ahmadinejad the mayorship. Amid his presidential bid, other conservative candidates also went their own way — even as the conservatives’ electoral committee had opted to throw its weight behind Ali Larijani, who presently serves as parliament speaker. This was a turning point as then-candidate Rafsanjani ended up seeing many of his associates support Ahmadinejad, whom he lost to in a presidential runoff.

What should not be neglected here is the fact that the disagreement between the conservatives and Rafsanjani dates back to the latter’s presidency (1989-1997). This gap was gradually widened over the years, reaching its climax in 2005 when the conservative camp and senior clerics stood behind Ahmadinejad.

As Ahmadinejad won the presidential runoff, Rafsanjani turned into his most prominent critic on both domestic and foreign policy issues. At the time, moderate conservatives were isolated within the conservative camp, which was led by resurgent hard-liners. Against this backdrop, Rafsanjani moved to distance himself from the camp, with many like-minded conservatives gradually joining him.

The Moderation camp’s approach stems from Rafsanjani's viewpoints, some of which had been shaped during the isolation he faced during Ahmadinejad's presidency. These viewpoints include promotion of engagement with the West — including the United States — advocacy for greater social freedoms and opposition to the securitization of the political atmosphere in the country. However, before Ayatollah Ruhollah Khomeini's death, Rafsanjani had asked the Islamic Republic’s founder to resolve the issue of Iran’s troubled relationship with the United States. This way of thinking was close to the Reformist current and completely opposed to conservatism.

As Ahmadinejad’s presidency came to an end, Rafsanjani unexpectedly registered to run in the 2013 presidential elections but was disqualified by the hard-line Guardian Council, which is tasked with vetting candidates. At the time, Rouhani, who was mostly unknown to the Iranian public, had also registered his candidacy, albeit keeping his campaign on the backburner since his mentor was also running. As the Guardian Council barred Rafsanjani from seeking office, Rouhani — then described as the shadow of Rafsanjani — entered the race with full force.

With his election, Rouhani became the harbinger of the Moderation camp. Having been effectively sidelined from mainstream politics following the disputed 2009 presidential elections, the Reformists backed Rouhani, asking their candidate Mohammad Reza Aref to withdraw in his favor. Thus, as Rouhani entered office, it was clear that he had done so not by himself but rather due to the support of Rafsanjani and the Reformists, including former Reformist President Mohammad Khatami (1997-2005) — both of whom were among the most popular figures in Iran at the time.

With Rouhani winning the election, more political figures dared to join the new Moderation camp. Those who were fed up with the hard-liners commandeering the conservative camp included Larijani; Ali Akbar Nategh Nouri, the former head of the supreme leader’s inspection office; and Ali Akbar Velayati, the supreme leader’s foreign policy adviser. These three figures also played an important role in pushing through the approval of the nuclear deal, for which they were loathed by the hard-liners.

As prominent figures left the conservative camp for the Moderation current, the former was weakened and gradually came to be seen as defined by its opposition to Rouhani on foreign policy and domestic issues.

The idea of "Moderation" was introduced on the political stage as a new approach to governing the country. But this dream started to decline with Rafsanjani’s passing in 2017, merely a few months prior to the presidential elections. At the time, many were critical of Rouhani's performance in domestic politics but still stood behind him in order to defeat the hard-line rivals.

During his re-election campaign last year, Rouhani gave people encouraging promises and spoke of resisting the hard-liners. But only weeks after securing a second term, he began softening his approach and tone. Today, the president is a different figure than during the campaigning. Not only is he declining to resist the hard-liners, but he has rather on occasion acted on the basis of their diktats. Given this situation, Reformists are criticizing Rouhani for his management of domestic affairs.

In parallel, the emergence of US President Donald Trump and his withdrawal from the 2015 nuclear deal has put the Rouhani administration on a dire economic path. With the Moderation camp losing its clout, prominent moderate conservative supporters of Rouhani — including Velayati — are going back to their old house and parting ways with the Moderation current. The loss of clout is also seen in opinion polls, which show sharply lower approval ratings for Rouhani since his May 2017 re-election.

There is still time to reverse course, but it will require immediate and serious action. If Rouhani does not fulfill his campaign promises to confront the hard-liners at home to expand civil liberties and boost the economy and rather focuses on his own future in politics, the Moderation camp will die along with the legacy of Rafsanjani. Such a scenario would not herald a glorious future for Rouhani but rather deprive him of his partisan base while exposing him to criticism and sniping from all sides.