Three deaths that will likely set back Rouhani

Having lost three of his main supporters among the clergy in the past year, Iran’s president faces an even harder battle for a second term. 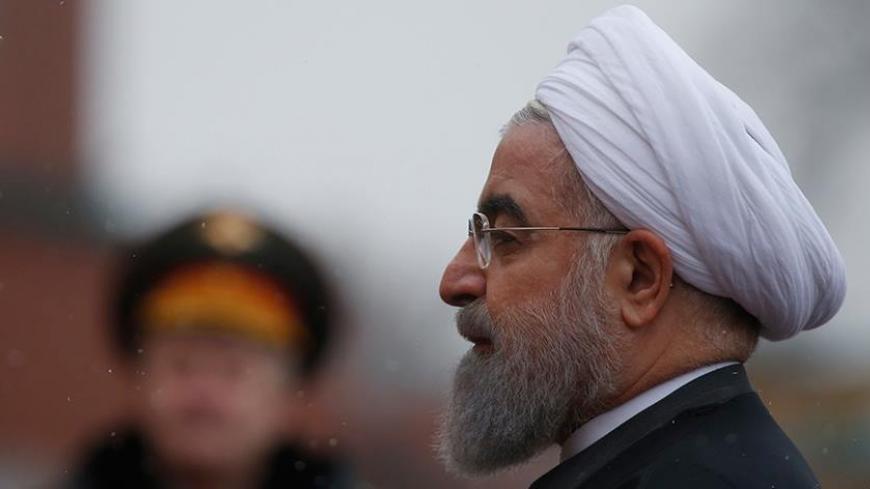 Iranian President Hassan Rouhani attends a wreath laying ceremony at the Tomb of the Unknown Soldier by the Kremlin walls in Moscow, Russia, March 28, 2017. - REUTERS/Maxim Shemetov

This past Iranian calendar year, which ended on March 20, was not favorable to moderate President Hassan Rouhani, despite his expectations. Rather, it turned out to be an ominous year, in the span of which the three main high-ranking clerics who backed Rouhani from the very beginning of his campaign for office in 2013 and through the ups and downs of his presidency died.

In Iran, clerics have consistently had a major impact on people’s views and opinions over the past centuries. A prominent example of this is the “tobacco fatwa,” which was issued in response to a British citizen being granted a full monopoly over the production, sale and export of tobacco for 50 years. Back then, mosques and hosseiniehs (prayer halls used to mark the martyrdom of Shiite imams and figures mostly in the Islamic months of Muharram and Safar) were the most influential media in Iran. The impact of these venues was such that various shahs and governments were loath to issue contentious decrees or sign controversial treaties with foreigners on dates close to Muharram and Safar. The tobacco concession led to a revolt in Iran and climaxed in the 1891 “tobacco fatwa” issued by Grand Ayatollah Mirza Hassan Shirazi. The religious edict, which was issued with consideration for the situation and expediency of the country, outlawed the use of tobacco and labeled it as tantamount to waging war against the 12th Shiite Imam Muhammad al-Mahdi, who is believed to emerge from occultation at the end of time.

More recently, the Islamic Revolution in 1979, which toppled the US-backed Shah Mohammad Reza Pahlavi, was led by clerics, with Ayatollah Ruhollah Khomeini at its helm. Indeed, some argue that the revolution first started in the seminaries and among clerics, who were trusted and respected by the people. Thus, it is clear that clerics have long played a significant role in Iranian politics.

In the 2013 presidential vote, Ayatollahs Akbar Hashemi Rafsanjani, Abbas Vaez Tabasi and Abdolkarim Mousavi Ardebili all threw their weight behind Rouhani to prevent the election of another hard-liner, given the performance of Mahmoud Ahmadinejad (2005-2013), who is seen by many analysts as having damaged the country’s economy and foreign relations. In the span of the past 12 months or so, these three senior clerics — and important supporters of Rouhani — have died.

Ayatollah Tabasi died on March 4, 2016, only weeks before the beginning of the Iranian calendar year 1395. A leading figure in the Islamic Republic, Tabasi was appointed by the late Ayatollah Khomeini to the important position of custodian of the holy shrine of the eighth Shiite Imam Reza. The shrine is located in the northeastern city of Mashhad. Tabasi was also a close friend of current Supreme Leader Ayatollah Ali Khamenei — a long friendship that dated back to the years before the 1979 revolution. He harbored moderate views and actively opposed the hard-liners. Indeed, he largely supported Rafsanjani and his policies over the past decades. In this vein, despite being recognized as a conservative, he did not back fellow conservative Ahmadinejad. Rather, he supported Rafsanjani in the 2005 presidential elections. As such, he rarely, as is customary, used to welcome then-President Ahmadinejad upon his visits to Mashhad.

Tabasi, who was also in charge of Razavi Khorasan province’s seminary, was a supporter of Rouhani. “His [Rouhani’s] relationship … with the seminaries is very strong and firm and he doesn’t think about anything except the advancement of Islam and enforcing the divine and Islamic laws,” Tabasi said of the Iranian president in August 2014. Following his demise, Mashhad — one of the largest cities in Iran — has rather rapidly turned into a new base for the hard-liners, dealing a direct blow to Rouhani’s presidency.

Ayatollah Mousavi Ardebili died on Nov. 23, 2016. He served as chief of the Iranian judiciary in 1981-1989, and then returned to the holy city of Qom, where he acted as a marja (the highest clerical rank in Shiite Islam). Another strong supporter of Rouhani, Mousavi Ardebili played an important role in mobilizing Qom and its clerics in favor of the incumbent both before and after the 2013 presidential elections. He had a good relationship with other grand ayatollahs, including Mousa Shobeiri Zanjani, making him an invaluable supporter for Rouhani. On Aug. 7, 2013, only days after Rouhani’s inauguration, Mousavi Ardebili commended him and made particular note of his promised foreign policy, saying, “He [Rouhani] is a resourceful and experienced person. The social and political situation of Iran is very variable, and we need stability. The policy of detente is useful, good and necessary.”

Last, but certainly not least, Ayatollah Rafsanjani died on Jan. 17, 2017. The figurehead of the “moderation” camp and the paramount patron of Rouhani, his unexpected death has left the president alone in dealing with tough challenges ahead. Rafsanjani is widely seen as having been one of the most influential figures in Iran, having held a number of important positions over the decades, including serving as president for two terms (1989-1997). After having his candidacy in the 2013 presidential elections disqualified by the Guardian Council, which is tasked with vetting candidates, Rafsanjani, who was expected to win by a landslide according to several opinion polls, publicly announced his support for Rouhani. His longstanding support didn’t end when Rouhani took office; Rafsanjani repeatedly criticized the hard-liners for questioning the incumbent’s achievements, and especially the 2015 nuclear deal.

As such, Rouhani — who intends to run in the May 19 presidential elections — has started the new Iranian year on a heavy note. Although he has lost his three main supporters within the clergy, he still enjoys a good rapport with the high-ranking clerics in Qom — unlike his predecessor, who was banished by some grand ayatollahs. However, already under fire over his handling of the economy and other issues, it appears evident that Rouhani is likely to become even more vulnerable to attack looking ahead.