Five reasons Rouhani will be president for another term

With former President Mahmoud Ahmadinejad apparently sidelined by the supreme leader, Rouhani seems set for a second term in office. 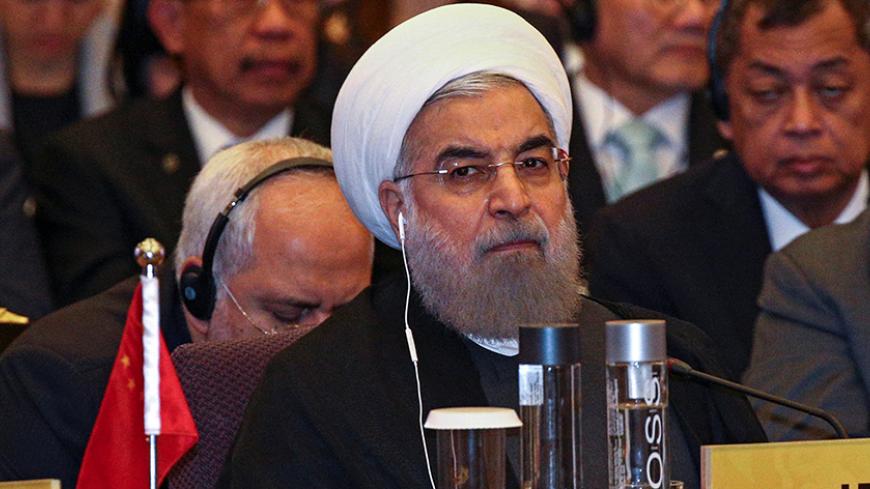 ESFAHAN, Iran — Former Iranian President Mahmoud Ahmadinejad’s attempt at a political comeback came to an abrupt end following his reported Aug. 30 meeting with the supreme leader. Ayatollah Ali Khamenei reportedly told Ahmadinejad that his provincial tours in recent months were inappropriate and that his candidacy in the May 2017 presidential election would be divisive, thus effectively barring him from taking part in the vote.

As news of the meeting surfaced, Ahmadinejad’s supporters, who initially dismissed the reports of Khamenei’s recommendation, quickly began raising doubt about whether the meeting had even taken place and, more so, what was reported to have transpired. As such, on Sept. 27, Khamenei personally and openly confirmed his reported discouragement of Ahmadinejad’s candidacy in the May 2017 election. In an open letter issued on the same day, Ahmadinejad declared his obedience to the supreme leader and stated that he would follow his recommendation.

Khamenei’s key motivation to oppose Ahmadinejad’s candidacy was to avoid the re-emergence of a divisive atmosphere ahead of the presidential vote, which could cause a repetition of the events that followed Ahmadinejad’s disputed re-election in 2009. Subsequent to Ahmadinejad’s withdrawal from the presidential race, and in an effort to create some hope for their own camp, the Principlists have begun pointing fingers at President Hassan Rouhani’s Achilles' heel: the economy.

Mohammad Reza Bahonar, an influential Principlist politician, has said that he believes the solution for his camp is to put forward a popular figure with an attractive economic plan for the poor. In an interview with the conservative outlet Nasim on Oct. 4, he said, “A new face in the Principlist movement will be more successful in the race. An economic hero can win the 2017 elections.”

This is while all political conditions for the smooth re-election of Rouhani seem to be in place. Indeed, the incumbent is likely to secure a second term in office for five main reasons.

First, the Principlists lack a charismatic face. The reality is that if Ahmadinejad had competed in the May 2017 election, the poll would have become rather exciting while at the same time extremely polarizing. His candidacy would have overshadowed that of any other Principlist candidate. As such, the Principlist movement has effectively lost its ace. At present, there is simply no figure in the Principlist camp that can be compared to Ahmadinejad in terms of charisma. That is one reason why prominent Tehran University professor Sadegh Zibakalam has stated that under the current conditions, “Even with his hands and feet tied, Rouhani will win votes in the May 2017 elections.”

Second, while the Rouhani administration’s economic performance has not been eye-catching, it has managed to save the country from economic collapse. Indeed, Rouhani has played the role of a physician who is unable to heal a patient but able to prevent the patient’s condition from getting worse. The Islamic Parliament Research Center has estimated economic growth of 6.6% in the current Iranian calendar year (ending March 20, 2017), driven by the rebounding oil sector. This is while the economy retracted by 6.8% in the Iranian year 1391 (which began on March 20, 2012) and has gradually returned to growth in the three years since. Though Iran’s economic growth is mainly influenced by exogenous factors, to the Iranian public, this rebound is seen as a positive score in the Rouhani administration’s report card.

Third, the supreme leader is not opposed to Rouhani’s re-election. There is no doubt that there are differences between Khamenei and Rouhani on various issues, such as United States’ implementation of the Joint Comprehensive Plan of Action (JCPOA), the idea of a similar deal with world powers on regional issues, their interpretation of Islam, their views on late Iranian leader Ruhollah Khomeini’s political and cultural tolerance, and many other issues. In other words, Rouhani is not what Khamenei wants, but the supreme leader nonetheless sees himself as having no choice but to tolerate him. On the first day of the Iranian year 1395 (March 20, 2016), and only hours after Rouhani’s Iranian New Year message and the proposal of the idea of a “second JCPOA,” Khamenei very clearly described the idea as a creation of Iran’s enemies and called it dangerous. Yet despite the differing views of the two men, Khamenei has openly stated, “Everyone should know that I support and confirm the [Rouhani] government and will use all my power to assist the administration and trust its high-ranking officials.”

Fourth, history shows that Iranians usually re-elect sitting presidents. With the exception of Abolhassan Bani-Sadr, Iran’s first president after the 1979 Islamic Revolution who was impeached in 1981, and his successor Mohammad Ali Rajai, who was assassinated in 1981, all other presidents of the Islamic Republic have served two consecutive terms. This includes Ali Akbar Hashemi Rafsanjani (1989-1997), Mohammad Khatami (1997-2005) and Ahmadinejad (2005-2013), each of whom pursued a different discourse. Though it was speculated that another Reformist would take office following Khatami’s second term, given Khatami’s great popularity in Iran, conservative Mahmoud Ahmadinejad found his way to the presidential palace by pursuing a discourse of justice and supporting the poor. In June 2013, Iranians voted for Rouhani on the basis of his new discourse of moderation and constructive engagement with the world and his description of the Ahmadinejad government as an administration that is inefficient and full of slogans. Indeed, looking back at previous presidential elections, it appears that Iranians do not care much about various governments’ actual performance, but rather their discourse and their ability to rally voters. Thus, it can be reasonably assumed that Rouhani will secure a second term in May 2017.

The last and most important factor is the consensus among Reformists on Rouhani. The Reformist camp neither can nor wants to sideline the incumbent president. In their view, Rouhani’s performance has been acceptable, while the political and economic shortcomings of his administration are due to factors outside the government’s control. As such, the Reformists believe that they should stand behind the Rouhani administration with all their might in order to advance their own agenda under his cover. Moreover, the Reformists lack a charismatic new leader who can run against Rouhani or a Principlist candidate. Their preferred figures, such as former president Khatami and opposition leader Mir Hossein Mousavi, are unable to run since the former will likely be disqualified by the Guardian Council while the latter is under house arrest. Thus, pragmatism will continue to prevail, dictating a continued Reformist consensus on support for Rouhani.