Iranian hard-liners use Tehran attacks to snipe at Rouhani

Though Iranian hard-liners have quickly seized the June 7 terrorist attacks in Tehran as an opportunity to rally forces, it is unclear whether their security-focused discourse will gain steam. 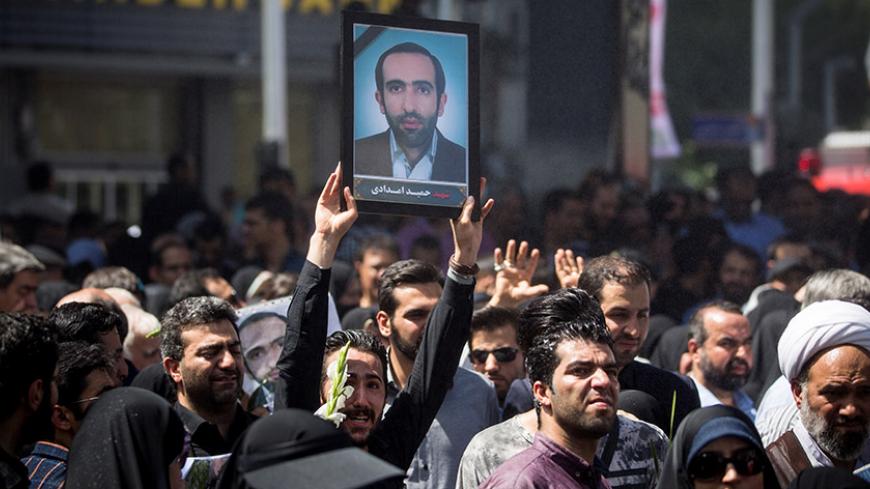 People attend the funeral of the victims who were killed in the June 7 attack on the Iranian parliament and Ayatollah Khomeini's mausoleum, Tehran, Iran, June 9, 2017. - TIMA via REUTERS

In the aftermath of the June 7 terrorist attacks in Tehran claimed by the Islamic State (IS), Iranian Reformists and moderates have sought to overcome the heightened factional divisions lingering from the recent presidential elections. Indeed, Abdollah Ramezanzadeh, Mohammad Ali Abtahi, Mohammad Reza Aref and Mostafa Tajzadeh among many other Reformist politicians have called for national unity. In contrast, conservative and hard-line politicians have not missed the opportunity to target their rivals. Even as bullets were flying inside parliament and the mausoleum of Ayatollah Ruhollah Khomeini, a political offensive against moderate President Hassan Rouhani kicked off. Rather than a cause for national unity, the attacks in Tehran marked the beginning of a new bout of political infighting.

The easiest and most vulnerable target for hard-liner attacks is anyone who opposed Iranian involvement in Syria. Indeed, conservatives have used the Tehran attacks to reiterate once again that if Iran had not been involved in Syria and Iraq, it would’ve been fighting IS in the streets of the Iranian capital on a daily basis. Noteworthy among these voices is Ahmad Tavakoli, a conservative former member of parliament. In a tweet amid the terrorist attacks on June 7, Tavakoli lambasted Gholamhossein Karbaschi, the Reformist former mayor of Tehran, for his remarks on April 30 denouncing Iranian military engagement in Syria and advocating a solution based on political negotiations.

Another pivotal theme of hard-line rhetoric has been the strident defense of the role of the powerful Islamic Revolutionary Guard Corps (IRGC) in protecting the country. The IRGC was fiercely criticized by Rouhani during the recent election campaigning over their ever-increasing involvement in the Iranian economy as well as interference with foreign policy and domestic politics. Ironically, instead of questioning the IRGC over their flagrant failure in preventing the infiltration of terrorists into parliament in the heart of Tehran, the IRGC has been heralded as heroes on state-run TV and in the conservative media.

The Joint Comprehensive Plan of Action and Rouhani’s efforts to engage in regional diplomacy have additionally been targeted. Kayhan, the hard-line daily whose editor-in-chief is appointed by the supreme leader, has condemned the United States for its purported support of the terrorists while criticizing Rouhani’s emphasis on constructive engagement with the world, writing in an editorial on June 10, “The events of the Wednesday [June 7] removed the facade of the Americans and exposed their true nature to the [Iranian] people. … Was Daesh [IS] not created during the [2013-15] nuclear negotiations?”

That hard-liners have acted so promptly in using the June 7 attacks as an opportunity to slam the moderates is not surprising. Just a month ago, their all-out and powerful election machine was crushed by Rouhani, who secured 57% of votes on May 19, far ahead of Ebrahim Raisi, his main conservative opponent. As such, the attacks in Tehran have provided hard-liners with a post-election relief of sorts, as they have sought to reunite their forces and mobilize their shattered rank and file for a fresh standoff with the Rouhani administration. Thus, their reaction to the attacks should be analyzed in the context of their exasperation in the aftermath of the elections.

The conservatives’ defeat in the May 19 vote was defining, for it signaled the ideological dead end and lack of powerful discourse in their camp.

After the death of Khomeini in 1989, no hard-line candidate has been able to win a presidential election by emphasizing revolutionary and religious-conservative values. The first president after the demise of Khomeini, the late Ayatollah Akbar Hashemi Rafsanjani, was at the center of the political spectrum; his successor, Mohammad Khatami, was a fervent Reformist. Mahmoud Ahmadinejad, though conservative in theory and practice, was first elected in 2005 on the back of economic populism rather than by stressing the social and cultural policies of the hard-liners. Rouhani also won office in 2013 and last month by portraying himself as the only viable alternative to the conservatives, whether on social and cultural issues or foreign policy.

Even before the May 19 polls, the conservatives were aware of the inability of revolutionary slogans to mobilize voters. Thus, they hijacked Ahmadinejad’s rhetoric. Raisi and Tehran Mayor Mohammad Bagher Ghalibaf promised to multiply the monthly cash handouts that most Iranians receive, and they waged a multifaceted defamation operation against Rouhani by disclosing several documents about the alleged corruption of the Rouhani administration in the live TV debates. Furthermore, they tried to dissociate themselves from extremist social and cultural approaches and to depict a more moderate image. Even Raisi, the conservative finalist, met with an underground rapper who is popular among the youth. The photos of the meeting went viral on social media. The hard-liners’ loss in the elections, however, indicates that even incorporation of moderate and Reformist themes into the public image of conservatism will not necessarily strengthen their voter base. Therefore, a reshuffling of their whole discourse has now been put in place.

In this vein, the terrorist attacks in Tehran have provided hard-liners with a pretext to frame their new discourse around national security. If anything, as in many other parts of the world, conservatives have proven to be masters of this exercise.

Though national security seemed to be an initial conservative response to the Tehran attacks, Supreme Leader Ayatollah Ali Khamenei may not be following the same line. Instead of exacerbating the sense of emergency and aggravating the threat of terrorism, which could have been used to seek more prerogatives and impunity for the IRGC, Khamenei belittled the attacks by calling them “firecrackers.” Moreover, he chose to reiterate his usual revolutionary rhetoric and Islamic values to slam Rouhani.

Indeed, Khamenei has leveled two different yet connected rounds of attacks on the Rouhani administration after the June 7 attacks. First, only a few hours after the attack, he gave the green light to his supporters to engage in fiercer assaults on the government based on its allegedly nonrevolutionary social and cultural policies but also its permissive conduct of foreign affairs. He gave the revolutionary elements a fire-at-will formula so that they no longer needed to wait for the orders of a central command, meaning Rouhani’s government, which, he suggested, is not vigilant to the real threats to the Islamic Revolution. On the other hand, on June 13 he meaningfully warned Rouhani of the fate of Abolhassan Bani-Sadr, the first president of the Islamic Republic of Iran who, after assuming office in 1980, was impeached by parliament and dismissed by Khomeini, “In 1981, the then president bipolarized society and divided the people into two groups of opponents and proponents. That experience must not be repeated.”

Disappointed with the results of the May 19 elections and with the inability of revolutionary discourse to win voters, the hard-liners have focused on finding a more instrumental way to go around their crisis and revive their energies. The Tehran attacks have provided them with the opportunity to achieve precisely these objectives. However, the question of whether new rhetoric centered on national security will provide conservatives with the impetus to regain lost momentum remains unclear. If anything, given Khamenei’s decision to not focus on national security in the aftermath of the attacks while increasing verbal assaults on Rouhani suggests that the scope for hard-liners to fully seize the opportunity is indeed limited.