Iranian hard-liners smell blood as Rouhani under fire over economy

Iranian hard-liners continue to maneuver to not just undermine but wholly get rid of moderate President Hassan Rouhani. 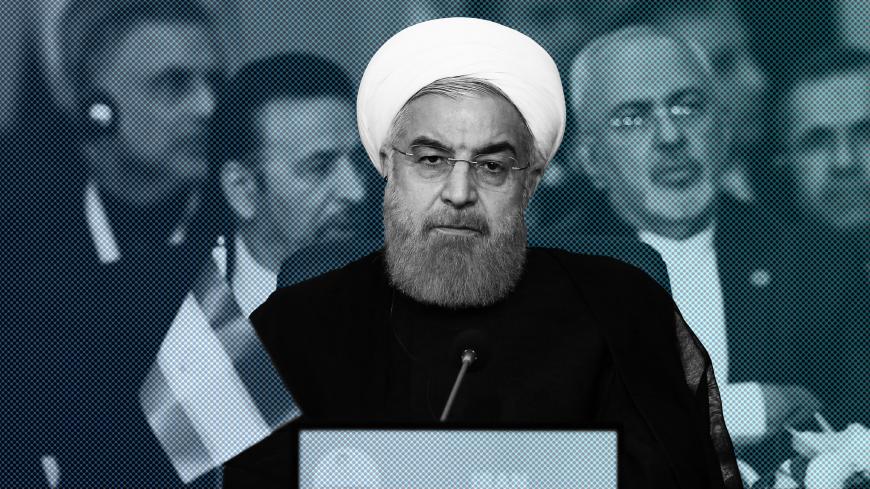 Iranian hard-liners are euphoric as President Hassan Rouhani is under increasing pressure from public opinion and losing credibility among voters, given the dire condition of the economy. But this state did not emerge overnight; rather, it is the result of a combination of US President Donald Trump’s policies and the well-devised plans of Rouhani's staunch opponents in Tehran.

This time, hard-liners don’t just want to weaken the moderate president but to push him out altogether. While such a step has been a taboo one in recent decades, the grounds for it were prepared in the aftermath of the May 2017 presidential elections, which led to the defeat of hard-line candidates. According to Abbas Salimi Namin, a moderate conservative, this plan is being led by hard-liners under the leadership of Ayatollah Mohammad Taghi Mesbah Yazdi. But Salimi Namin also said May 20 that Supreme Leader Ayatollah Ali Khamenei opposes the endeavor, as he is against any government prematurely stepping down.

As Trump was approaching his May 12 deadline to decide whether to stay in the nuclear deal, Iranian hard-liners were proceeding with their own scheme for Rouhani's resignation or impeachment. These efforts may have been further triggered by the December 2017 protests across Iran. Those demonstrations first emerged in the northeastern city of Mashhad in the Khorasan Razavi province, where they were organized by hard-liners. But things quickly got out of their control. Khorasan Razavi is a hard-liner stronghold, with Friday prayer leader Ahmad Alamolhoda and his son-in-law Ebrahim Raisi — who was the primary candidate of the hard-liners in the 2017 presidential election — in effect ruling the strategic province.

Amid the protests in December, a number of conservative students at the University of Tehran on Jan. 1 wrote an open letter to Rouhani, asking for his resignation due to his lack of success in controlling unemployment and not fulfilling his electoral promises on various issues like filling the social gaps. Concurrently, as protests were continuing across the country, rumors circulated about Iranian lawmakers' request of Rouhani to resign.

In keeping with their strategy, on Feb. 13 Ebrahim Fayyaz, a well-known conservative professor at University of Tehran, said the president’s term won't reach its end in 2021. "Rouhani's government is … depressed. It is in the interest of the security of the country and people if he resigns as soon as possible."

As Trump's deadline to decide whether to stay in the nuclear deal approached, Iran's currency lost a third of its value, leading to harsh public criticism and various calls in cyberspace for Rouhani to resign. Amid all of this, hard-liners claimed they had gathered 100 signatures of parliament members to question Rouhani in parliament — one step away from impeaching him.

Then, Trump's threat to pull the United States out of the nuclear deal was realized, paving the way for harsh criticisms by hard-liners over Rouhani’s negotiations with the West and the United States. Consequently, a number of hard-liners called for early presidential elections and a military president, saying that such a figure could overcome the external and internal challenges facing Iran.

On May 8, Trump formally withdrew from the nuclear deal. The outcome was clear in Iran. Hard-liners quickly slammed Rouhani in a “told you so” demeanor, while a segment of public opinion also turned against the accord in the belief that it didn’t benefit the country.

Mentioning Rouhani's efforts to save the deal with European cooperation, the hard-line Ammar Cyberspace Base said on its Telegram channel May 10 that after five years of keeping the country procrastinating over harmful issues such as the nuclear deal and the loss of scientific and industrial capability when it comes to nuclear energy, and given that the government does not seem to have learned anything about the trustworthiness of enemies, it is now time for impeachment "to save the people." Hossein Allahkaram, a prominent member of the pressure group Ansar-e Hezbollah, on May 12 asked the parliament to dismiss Rouhani.

This trend has continued. On June 15, hard-line Ayatollah Abdul-Karim Abedini, the Qazvin province Friday prayer leader, attacked Rouhani indirectly, saying that week was the anniversary of President Abolhassan Bani-Sadr's impeachment. "We ask God to distance from the Islamic system all those who don't have the power and courage and authority to protect the blood of the martyrs and the Islamic Republic," Abedini said. Bani-Sadr served as the first president of Iran after the 1979 Islamic Revolution but was impeached in parliament on June 20, 1981, as he was accused of collaborating with the outlawed Mujahedeen-e Khalq and assisting the enemy during the Iran-Iraq War, which began in 1980.

Meanwhile, hard-line writer Kamran Qazanfari recently published an online book in which Rouhani is accused of having collaborated with the shah’s secret services, of not truly being an Islamic scholar who has reached the level of mujtahid and of working to overthrow the Islamic Republic. Qazanfari has also released audio files arguing why Rouhani must be impeached.

Given the ongoing economic and political crisis in Iran, conservatives and hard-liners have called for early elections and created such an atmosphere that even some Reformists have demanded that Rouhani resign, partly driven by a desire to save the face of Reformism among the public and avoid electoral losses. The fact that a number of Reformist figures and lawmakers support the conservatives and hard-liners' revived plan to summon the president to parliament and question him is proof of this. In remarks that indicate further distancing from Rouhani, Reformist Mohammad-Taghi Karroubi said June 24 that if the president doesn’t intend to confront the hard-liners, he should leave office.

Moreover, prominent Ayatollah Hossein Mousavi Tabrizi said June 26 that if Rouhani knows who is behind the recent economic turbulence, he should reveal it, lest he has betrayed the people.

Rouhani and his inner circle are well aware of what is unfolding. Ali Jannati, an adviser to the president’s chief of staff, said June 10 that Rouhani is not a person who would resign amid the pressures. But the most important warning to the conservatives came from Foreign Minister Mohammad Javad Zarif, who commonly avoids entering partisan debates. He warned June 24 against assuming that if Rouhani leaves office "and conservatives come, they will become successful." He added, "Now, the enemies' goal is neither Iran's system nor Rouhani's government. … The target is Iran. They want to destroy Iran."

After a long silence, Rouhani — in a rare, explicit speech June 27 — demonstrated his determination to resist and confront his opponents, calling for national unity in the face of rising external pressures. He then addressed the conservatives and hard-liners indirectly, saying, "The administration will stand. Those who think that the government is scared and will resign, they are making a mistake."

For now, what may bring more stability to Rouhani’s position would be an agreement with Europe to save the nuclear deal. If such an accord contains solid guarantees, it could inject sorely needed hope and stability to Iran and its economy. If not, pressure on the president is likely to rise from every direction — and the winners in such a scenario will in all likelihood be the hard-line camp.