The continuing controversies surrounding the holding of concerts in Iran appear to have less to do with Islam and more to do with the country’s upcoming presidential vote. 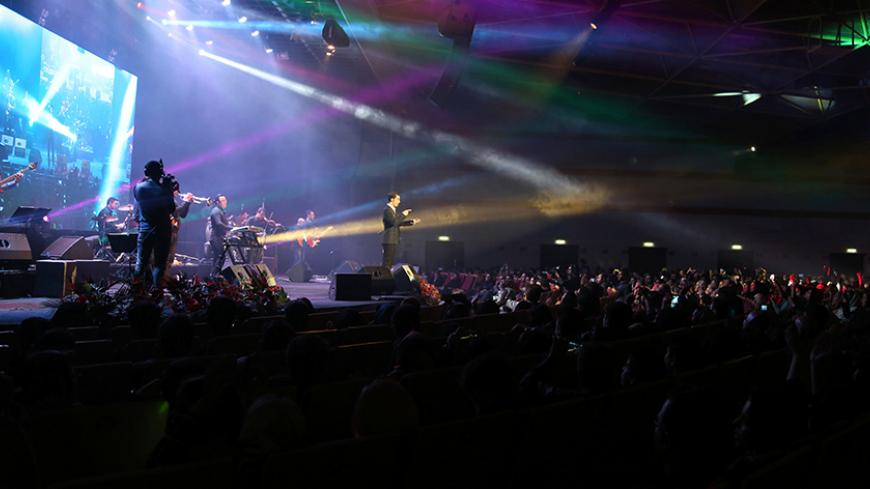 Repeated concert cancellations over the past year have turned into a real headache for moderate President Hassan Rouhani, who in his 2013 election campaign pledged that he would address cultural issues.

In August, Mashhad’s ultra-conservative Friday prayer leader, Ahmad Alamolhoda, defied the Rouhani administration as he prevented singers from performing in the holy city. Amid strong opposition from the hard-liners, Minister of Culture and Islamic Guidance Ali Jannati folded and stated, “Considering the existence of the [8th Shiite] Imam Reza shrine in Mashhad, the holding of concerts has some opponents, including the dear representative of the supreme leader to [the province of] Khorasan Razavi. We respect his opinion, and despite the fact that the concerts posed no problem, we are dissuaded from holding concerts there.”

This clear retreat sent a signal to hard-liners in other cities that they can also resist and defy the authority of the Rouhani administration. Indeed, the holding of concerts in cities such as Yazd, Shiraz and Zanjan as well as provinces such as Kohgiluyeh and Boyer-Ahmad has hit obstacles. For instance, Mohammad-Reza Naseri, the Friday prayer leader of Yazd, on Sept. 30 voiced his opposition to concerts, saying, “I’m warning those who are striving and giving speeches regarding the holding of concerts in Yazd that if you don’t stop, we will deal with you in other ways.”

Qom, situated just over an hour’s drive southwest of Tehran, is seen as one of the major centers of Shiite theological studies in the world. The holy city, which is home to the shrine of Fatima Massoumeh (the sister of Imam Reza), significantly affects the political atmosphere of Iran. Thus, all Iranian presidents have sought to establish good and warm relationships with the clerics in the city.

Unlike former President Mahmoud Ahmadinejad, who was rejected by the grand ayatollahs during his second term, Rouhani has been successful in obtaining the consent and support of these senior clerics. This might go back to Rouhani being a cleric himself and enjoying close friendships with most influential grand ayatollahs. However, despite the fact that Rouhani’s opponents in Qom are a minority, they are powerful and mobilized, and more so, skilled in whipping up sentiment against the moderate administration. In this vein, a Sept. 29 concert held in Qom quickly sparked protests from hard-liners. One by one, Rouhani’s opponents released harsh statements against the president and the culture minister.

The influential Society of Seminary Teachers of Qom, headed by ultra-conservative Ayatollah Mohammad Yazdi, was one of the first to strongly condemn the concert. “The Ministry of Culture and Islamic Guidance and minister of culture should be held accountable. Why will you not take steps to promote Islamic culture and the revival of religious values? … And why do you insistently support the concerts and [what happens] on the sideline [of the concerts] in different parts of the country?” a statement by the Society of Seminary Teachers of Qom said Oct 1.

One day later, facing heightening tensions, the Culture Ministry’s director in Qom, Abbas Daneshi, apologized. On the same day, Jannati rejected the hard-liners’ protests, saying, “What was performed in Qom wasn’t a concert, but was a chorus that had no issues in terms of its content and appearances. Even the female chorus singers had aptly [worn the] Islamic hijab.”

The apology and Jannati’s explanation wasn’t enough for Rouhani’s opponents, as Ayatollah Yazdi, who was voted out of the Assembly of Experts in the Feb. 26 elections for the influential body, asserted on the same day, “No one is allowed to accept the apology of the [Qom] Culture Ministry director. Since the shrine of [Fatima] Massoumeh and seminaries and maraji [senior Shiite scholars known as "sources of emulation"] have been disrespected. … The director of the Culture Ministry must resign and leave Qom. This issue can’t be solved by apologizing.” He then addressed the culture minister, saying, “Change your approach as this will decrease the popularity of the government.”

Moreover, lawmakers from Qom released a statement condemning the concert. It is noteworthy that parliament Speaker Ali Larijani was among these members of parliament. Indeed, though Larijani is an ally of Rouhani, he does not want to lose the support in Qom that has enabled him to rise up the ranks.

Branding the opposition to concerts as “electoral,” in reference to the May 2017 presidential vote, government spokesman Mohammad-Bagher Nobakht said Oct. 4, “The government is strongly avoiding putting its concentration and energy on such issues, because the series of these [kinds of] reactions will continue until the 2017 election.”

Yet, in the end, the Ministry of Culture and Islamic Guidance once again folded amid the pressures. On Oct. 9, Daneshi submitted his resignation letter, which was accepted by Jannati. In his resignation letter, Daneshi stated, “I had announced officially that we had no plans to hold concerts [in Qom], and what was performed on Sept. 29 wasn’t a music concert at all. … The performance, in terms of content and appearance, was completely based on Islamic criteria.”

The repeated retreats of Jannati have not only upset moderates and Reformists, but even annoyed Rouhani himself. On Aug. 22, the president said, “In my opinion, none of the ministers should give up in the face of pressure,” adding in reference to those who defy the government’s authority, “Whoever wakes up in the morning and finds a tribune cannot set the law.”

The Ministry of Culture and Islamic Guidance has oftentimes found itself at the center of controversy ever since Rouhani took office, with Jannati having a record of being far from firm in his dealings with hard-line critics. As such, there are now rumors in Tehran about his impending resignation given the president’s indignation, with the Entekhab news site reporting that Jannati has spoken with his deputies about possibly stepping down.

The big picture appears to be that the real aim of the backlash against concerts — and more so, the government’s authority — is to damage Rouhani’s close ties with the grand ayatollahs in Qom. These senior clerics have notably aided the president during the various ups and downs in his three years in office, including the many controversies during the negotiations leading up to the nuclear deal. As such, the importance of the relationship between Rouhani and the grand ayatollahs should not be underestimated, especially as Iran is approaching its next presidential elections. One can only wait and see what the president will do to counter his hard-line opponents’ efforts to harm his ties with Qom.