Following a week of whispering, three controversial members of the cabinet of Iranian President Hassan Rouhani have stepped down. 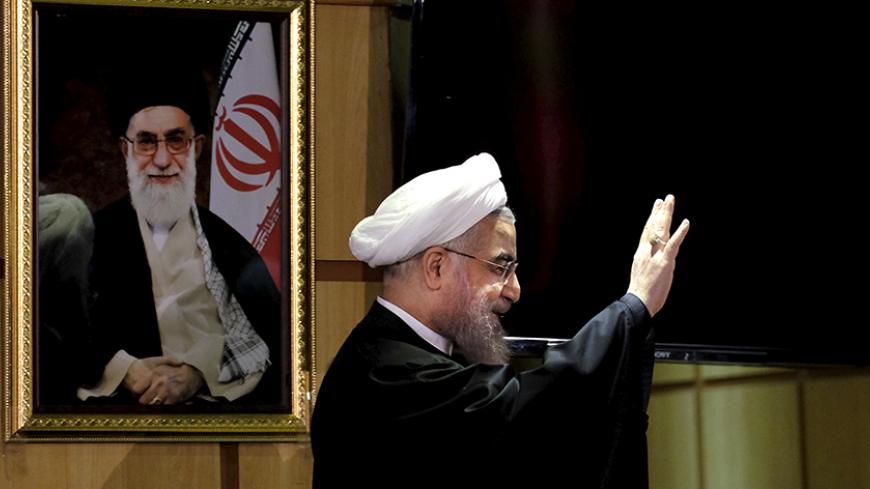 Iranian President Hassan Rouhani waves as he stands next to a portrait of Iran's Supreme Leader Ayatollah Ali Khamenei after registering for February's election of the Assembly of Experts, at the Interior Ministry in Tehran, Iran, Dec. 21, 2015. - REUTERS/Raheb Homavandi

Though all three were said to have stepped down voluntarily, various reports indicate that Rouhani wasn’t content with them, an idea that was affirmed by a government official. Mohammad-Bagher Nobakht, the spokesman for Rouhani’s administration, appeared on state TV on Oct. 19 to explain the reason behind the Cabinet reshuffle. Nobakht said, “The change is aimed at improvement. … The president’s goal is to fulfill expectations as best as possible.”

Elaborating on Jannati's resignation, the spokesman added, “When Mr. Rouhani concluded that by changing the minister, the entire cultural field's performance would be better, he made the call.” Nobakht then explained the change of education minister, saying, “Despite Mr. Fani’s abilities, it was decided that a more systematized person should take over."

Since Rouhani took office, the three ministers, especially Jannati, have been at the center of controversies.

Jannati’s retreat in the face of hard-liner pressure against holding concerts was met with furious criticism from Reformists and moderates, and even annoyance from Rouhani himself.

In his resignation letter to Rouhani, Jannati wrote, “I do not see myself able to continue serving in this field, and I want to see the government pursue its cultural plans in a calm situation devoid of tension.” However, Jannati mentioned that his leaving the office would not change the overall situation and “the propaganda will be intensified in the next few months.”

The Reformist Shargh newspaper reported Oct. 20 that Jannati’s resignation may have stemmed from “supreme-level” officials' “dissatisfaction” with him.

Shargh said Goudarzi was dismissed in the aftermath of presidential Chief of Staff Mohammad Nahavandian's trip to Qom, where the grand ayatollahs expressed their criticism of Goudarzi’s activities in youth affairs.

Reformist and conservative media outlets reported that Fani, unlike the two other ministers, resisted Rouhani’s decision.

Fani said in his letter, “I state my readiness to follow any decision by you about the continuation of my work.” Some journalists interpreted these words as Fani standing up to the president.

Before the resignation, Fani was on the verge of impeachment. Bahram Parsi, the spokesman for the Reformist Hope faction in parliament, told the Iranian Students News Agency on Oct. 19, “For various reasons, including the current demands of the Hope faction parliamentarians who are concerned about cultural issues, we asked Mr. Fani in a letter to accept the decision and resign. We also had the same correspondence with the president regarding the acceptance fo this resignation.”

In reaction to the Cabinet reshuffle, hard-line former parliamentarian Alireza Zakani said Oct. 19, “The resignations and dismissals of the ministers of the Hope and Prudence government were a politicizing act, and I don’t think it will be effective.” Meanwhile, Mohammad-Reza Bahonar, an influential moderate conservative, said Oct. 19, “The Cabinet reshuffle should have been done sooner, and this reshuffle is not adequate. Other ministers need to be changed.”

Following the resignation of the three ministers, Rouhani issued separate decrees Oct. 19 announcing the appointment of Mohammad Bat’haei, Abbas Salehi and Nasrollah Sajjadi as the caretaker ministers of education, culture and sports, respectively.

Next week, the new ministers will be introduced to the parliament for a vote of confidence, which doesn’t seem a difficult goal given the composition of the parliament, where Reformists and moderates hold the majority.

It is not known whether the president will present the caretakers to the parliament for more permanent consideration. Based on a report from Reformist Ensaf News on Oct. 19, Salehi is one of the main candidates in consideration for replacing Jannati in the Ministry of Culture and Islamic Guidance. Salehi was Jannati's deputy for cultural heritage and activities, and studied philosophy while at university. He is also a cleric, but doesn’t wear the usual outfits Shiite clerics do. According to an Oct. 18 report by conservative Fars News, Hesamodin Ashna, the president's cultural adviser, and Reza Salehi Amiri, the head of the National Library and Archives Organization, are also among the potential candidates.

According to an Oct. 19 report in the moderate publication Entekhab, possible candidates to replace Goudarzi include Amiri; Ali Asghar Mounesan, the managing director of the Kish Free-Trade Zone; Mohammad Dadkan, the former head of the Soccer Federation; and Masoud Soltanifar, the vice president and head of the Cultural Heritage, Handcrafts and Tourism Organization.