The main reason Rouhani replaced three of his ministers

There are many reasons for the Iranian president’s decision to reshuffle his Cabinet, but none outweigh his drive to cement his chances for a second term in next year’s election. 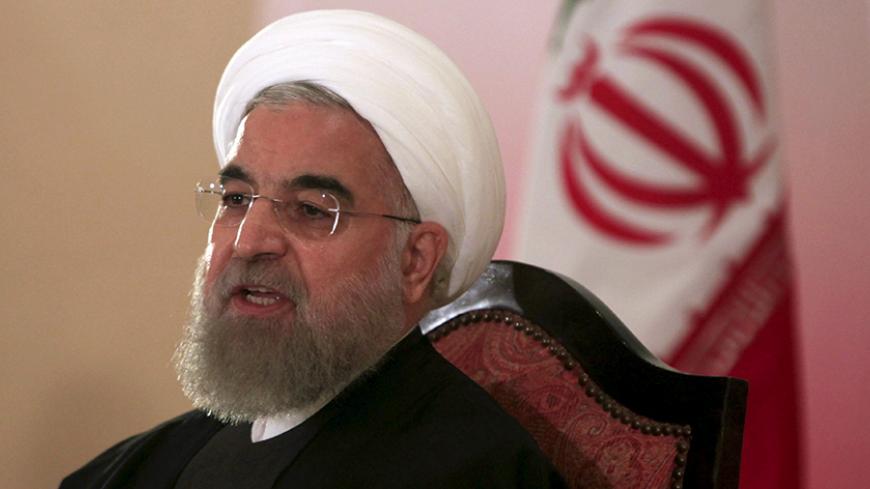 ESFAHAN, Iran — After much speculation, Iranian President Hassan Rouhani has appointed caretakers for the three empty seats in his Cabinet: Reza Salehi Amiri (from the Moderation and Development Party) for minister of culture and Islamic guidance; Fakhrodin Ahmadi Danesh-Ashtiani (from the Islamic Iran Participation Front) for education minister; and Masoud Soltanifar (from the National Trust Party) for minister of sports and youth affairs — all of whom have been introduced to parliament for votes of confidence. They will, respectively, replace Ali Jannati, Ali Asghar Fani and Mahmoud Goudarzi, who tendered their resignations Oct. 19.

Rouhani had nominated Amiri, Danesh-Ashtiani and Soltanifar for different ministerial positions back in 2013 in his initial proposed Cabinet. However, all of them were rejected by parliament, as they failed to gain votes of confidence. Defending his Cabinet reshuffle, Rouhani said, “The country’s goal is development and transcendence, and the government’s goal is to be at the service of society and the people. To achieve this goal, sometimes a manager has to be kept and sometimes changed.” Although Rouhani has described Iran’s main problem as “unemployment among the country’s educated youth, and especially among young women," the ministers replaced were responsible for culture and sports. Hence, the key question is why these ministers have been replaced and the basis of the criteria for the selection of their successors.

The absence of cultural reform, which Rouhani had promised during his 2013 campaign and the initial part of his term, could be one contributing factor. Examples of this include the cancellation of concerts in the northeastern city of Mashhad, or the forced resignation of the Culture Ministry’s director, Jannati, in the holy city of Qom related to his giving singers permission to hold concerts there. When Jannati retreated in the face of pressure from hard-liners and called off concerts to respect the views of conservative clerics, he found himself at odds with the president. In a public speech in August, Rouhani voiced his dissatisfaction with Jannati’s performance by saying, "A minister should abide by the law and not succumb to any form of pressure and retreat."

This is while Supreme Leader Ayatollah Ali Khamenei, some senior Shiite clerics and other influential clergymen have expressed displeasure with the cultural situation in the country. In a meeting with lawmakers June 5, Khamenei said, “I feel that there is a sense of indifference both in producing useful cultural goods and preventing harmful cultural goods.”

As such, it appears that Jannati ultimately became the scapegoat in the political struggle over the direction of the cultural scene in Iran. This is while some public figures, such as prominent Tehran University professor Sadegh Zibakalam, believe that Jannati could in fact have shielded Rouhani against increasing pressure from hard-liners in the cultural arena, given his pedigree. Of note, Jannati is the son of Ayatollah Ahmad Jannati, the hard-line head of the Guardian Council. Moreover, the Ministry of Culture is not the only authority responsible for dealing with cultural issues, and thus the culture minister cannot solely be held accountable for issues in this arena — a point that Jannati himself raised in his resignation letter. In addition, Rouhani knows full well that when it comes to domestic politics and cultural issues, the balance of power is not in his favor. Thus, it appears that to show tactical flexibility, Rouhani decided to change the pieces in the game as the only possible approach.

The dismissal of the sports minister may have been due to pressure on social media, since some experts thought Goudarzi’s performance was good. If Instagram was filtered or if the president did not have an official Instagram account, Goudarzi might have been sitting comfortably in his chair right now. According to the economic daily Donya-e Eghtesad, Rouhani’s Instagram page was repeatedly the target of critical comments by people who were unhappy with the sports minister’s performance — especially over Iran's poor showing in the Summer Olympics in Rio de Janeiro earlier this year. To gain an idea of the situation, harsh criticism of the nuclear deal was nowhere near the parallel scorn heaped on national soccer team coach Carlos Queiroz over his performance. Indeed, it appears that the outrage the president has faced over the nuclear deal is nothing compared with the pressure over the performance of his sports minister. In the end, this disapproval — and Goudarzi’s sporadic criticism of the Rouhani administration — proved to be very costly for him.

As for Rouhani’s recently resigned education minister, Fani, he was continuously on the verge of impeachment during his time in office. In fact, he was among the ministers who frequently commuted between their ministries and parliament in an effort to lobby parliament members not to impeach them. Fani hoped that the incoming, more government-friendly parliament elected on Feb. 26 would put less pressure on him, but he was wrong, as reports of embezzlement in the Teachers Reserve Fund had made his impeachment ever more pressing. Last month, Hossein Maghsoudi, the spokesman for the parliamentary group tasked with fighting financial corruption, announced that violations had indeed taken place in the Teachers Reserve Fund.

Maghsoudi said, “Clarifying the [case of corruption related to the] Teachers Reserve Fund is one of the main reasons why the education minister needs to be impeached. Investigations point to financial corruption of about 80,000 billion rials [$2.5 billion] in this fund.”

Although the amount that has been embezzled is disputed, the case has shocked both the Education Ministry and teachers, since educators never thought a fund that was supposed to serve as a means for resolving their economic problems would have such a fate. If anything, the embezzlement scandal hastened Fani’s fall. Thus, to prevent a repeat of the heat on the government that followed the recent scandal over excessive pay in which leaked payslips showed some senior officials had received inflated salaries, and to not give rival Principlists a pretext for launching a propaganda campaign against the government by impeaching Fani, Rouhani decided to take the fastest way out and have the education minister resign.

Finally, Rouhani’s Cabinet reshuffle also has political dimensions that verge on the personal. First of all, the resigned ministers were not Rouhani’s ideal choices. He chose them and his science minister reluctantly under pressure from the previous conservative-dominated parliament. His minister of science, however, has had the good fortune of escaping the Cabinet reshuffle. Second, by replacing these ministers, Rouhani wants to paradoxically reduce the hard-liners’ displeasure with the country’s cultural situation. At the same time, he wants to maintain his popularity by introducing individuals who are identified with the Reformist camp in a nod to culture, art and sports enthusiasts, who are mainly young. As such, there is no doubt that the Cabinet reshuffle will improve the chances of the success of Rouhani’s re-election campaign ahead of the upcoming presidential vote in May 2017.