The Iranian parliament’s vote of confidence to Rouhani’s new ministers signals that the legislature is now in the hands of supporters of the administration. 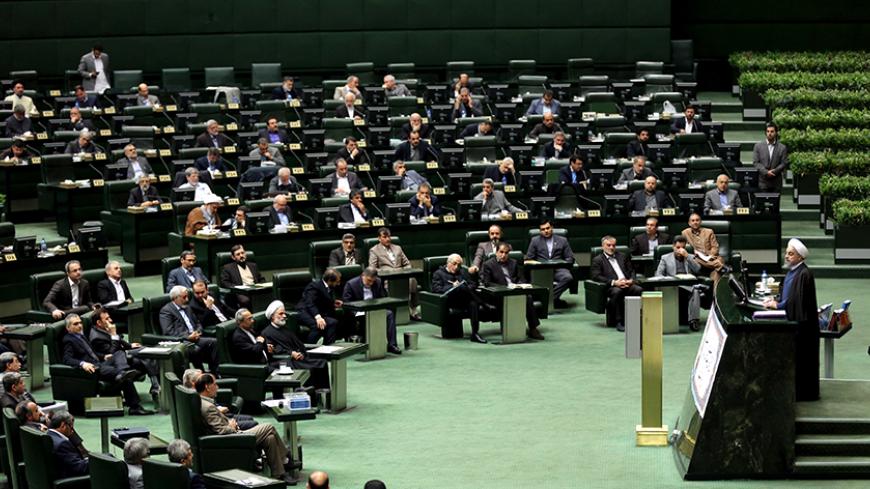 Iran’s parliament clarified its position toward the moderate government of President Hassan Rouhani on Nov. 1, giving its vote of confidence to each of the president's three proposed new ministers.

Following the Feb. 26 parliamentary elections, both hard-liners and supporters of Rouhani claimed victory. Amid the contradictory reports on the outcome of the vote, hard-line Kayhan Daily happily wrote that 48% of “conservatives” had won seats, while “moderates” and “Reformists” had only secured 35% of ballots.

But the Nov. 1 parliamentary sessions debunked the hard-liners' claims of having gained a majority in the legislature. Indeed, all three of the nominees Rouhani presented to head the ministries of culture and Islamic guidance, education, and youth affairs and sports received votes of confidence.

Fakhreddin Ahmadi Danesh-Ashtiani was backed by 157 out of 290 legislators to become the new minister of education. Compared to the other two proposed ministers, Danesh-Ashtiani faced the most opposition, as 111 lawmakers voted against his appointment. This indicates that pro-Rouhani forces hold a parliamentary majority. Plus, the number of hard-line members of parliament is possibly less than 111, given that a number of legislators who opposed Danesh-Ashtiani were moderates and independents. Before the voting, Abolfazl Torabi, a member of the Velayat faction, which gathers both conservatives and moderates, hinted that the sentiment toward Danesh-Ashtiani within the parliamentary group was “negative.” Meanwhile, Masoud Soltanifar, the new minister of youth affairs and sports, gained 193 “yes” votes, which highlights the real power and quantity of pro-Rouhani members of parliament. Reza Salehi Amiri became the new minister of culture and Islamic guidance, with 180 votes in favor.

The mobilization of members of parliament to vote in favor of Rouhani’s proposed ministers couldn’t have occurred without the efforts of lobbying veteran politicians Larijani and Aref.

Larijani, who is engaged in an unannounced coalition with Rouhani, chaired the Velayat faction in the first days of the incumbent parliament. He was then replaced by Haji Babai, a conservative who served as education minister under former President Mahmoud Ahmadinejad. However, Larijani still has influence over the Velayat members. In fact, on Nov. 1, before voting began, a joint meeting between the Velayat and independent factions was held with the aim of reviewing the proposed ministers — and it was chaired by Larijani. This meeting probably helped push some of the conservative opponents of the government to vote in favor of Rouhani’s proposed ministers.

In this vein, it is worth mentioning that hard-liners have consistently slammed Larijani for siding with Rouhani and for his role in persuading members of parliament to back the July 2015 nuclear deal with six world powers.

Noting the hard-liners’ protests and ruckus against the proposed ministers, Parsai added, “We predicted that some may seek to politicize the atmosphere of the parliament. Thus, our posture [toward members of our faction] was in a way that [Hope] MPs could respond to the efforts at politicization of [the government’s] opponents.”

The loss of “sedition” as a political tool

Rouhani’s three proposed ministers were notably all rejected by the previous parliament (2012-2016), which was dominated by conservatives and hard-liners. At that time, hard-liners and ultra-conservative members of parliament asserted that the three potential Cabinet ministers, Danesh-Ashtiani, Soltanifar and Salehi Amiri, were all involved in “sedition.”

By “sedition,” hard-liners were pointing at the unrest in the aftermath of the disputed 2009 presidential election. Following that vote, presidential candidates Mir Hossein Mousavi and Mehdi Karroubi objected to the election results that declared Ahmadinejad's victory. They charged that the election was rigged, and joined by a number of Reformists and moderates, they protested the outcome. Mousavi and Karroubi were eventually put under house arrest, where they have remained for the past five years.

Since then, every time hard-liners have sought to vote down a minister proposed by Rouhani, they have resorted to charging the person in question with belonging to the “sedition.” While their previous efforts were successful under the former conservative-dominated parliament, the Nov. 1 votes of confidence show that “sedition” is no longer a useful political tool.

Indeed, during the recent votes of confidence, hard-line lawmakers — including Seyyed Hossein Naghavi Hosseini — accused the proposed ministers of being involved in the “sedition.” Apart from failing to sway members of parliament, hard-liners were confronted by the Hope faction. Ahmad Sheikh, a Reformist parliamentarian and cleric, addressed hard-liners Nov. 1 saying, “Stop this immorality. … Is this the path of martyrs [who sacrificed their life during the 1980-88 Iran-Iraq War]? … How much longer will those who pretend [to be a follower of the 1979 Islamic Revolution] be able to claim to be a revolutionary?”

The moderate and outspoken deputy parliament speaker, Ali Motahari, said Nov. 2, “The parliament’s vote of confidence to the three proposed ministers showed that the ‘sedition’ weapon and accusing people of ‘being seditionist’ is no longer an appropriate ploy for purging the efficient and revolutionary forces.” He added, “The [incumbent] 10th parliament has shown that it will not be deceived by tradesmen of the ‘sedition.’ This is the important achievement of yesterday’s [parliamentary] session.”

As such, it appears that parliament will engage more positively with the government compared to the previous legislature, which constantly obstructed the administration’s policies. If anything, the parliament just gave a green light to Rouhani to push through with his policies that have so far been left unfulfilled.