In Iran, a conservative cleric is continuing to block musical concerts in defiance of the Culture Ministry, leading others to do the same, undercutting the authority of President Hassan Rouhani. 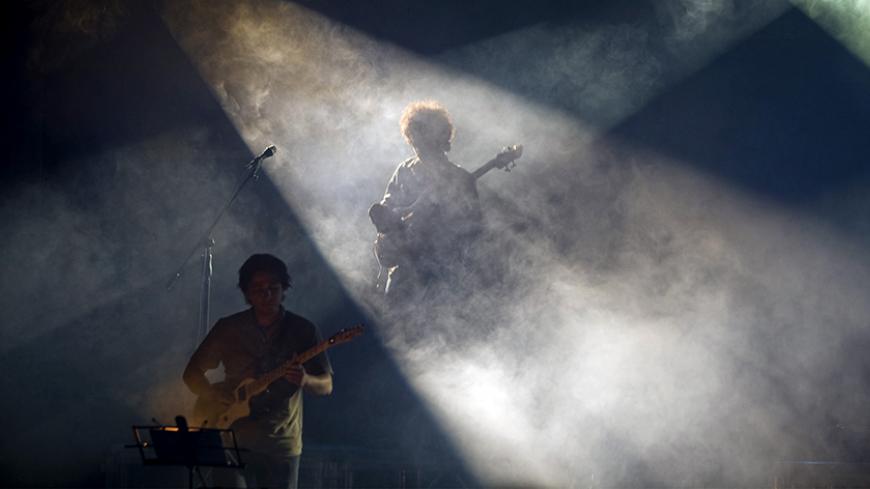 Iranian musicians perform during a concert at the Interior Ministry building in Tehran, April 24, 2008. - REUTERS/Morteza Nikoubazl

TEHRAN, Iran — In the campaigning leading up to Iran’s 2013 presidential vote, among the most important promises of Hassan Rouhani were those on cultural issues. After winning the election, Rouhani named Ali Jannati as his minister of culture and Islamic guidance to fulfill his promises. However, since day one, Jannati, who is a moderate son of ultra-conservative Ayatollah Ahmad Jannati, has faced resistance from both hard-liners and Reformists.

Hard-liners say Jannati is crossing the red lines of the 1979 Islamic Revolution’s values, while Reformists charge that he is retreating in the face of criticism and attacks by conservatives.

During the past decade, concerts have rarely made waves, but ever since Rouhani took office, concert organizers have repeatedly faced obstruction and consequent cancellation.

To avoid concert cancellations, which damage Rouhani’s approval ratings, the administration has issued a circular to prevent other state bodies such as the judiciary and the police from calling them off. The circular states that police are not allowed to stop concerts. Jannati has said that based on the new law, singers are to request permission to hold a concert from the Ministry of Culture, while the police are only to deal with traffic around the venue. In response, the deputy head of Iran’s armed forces, Gen. Masoud Jazayeri, ordered police to continue “dealing with ethical and misbehavior anomalies in places, including concert venues.”

Khorasan Razavi province, known as the religious capital of Iran, has set a record in concert cancellations. Situated in the northeast of the country, it is one of the largest provinces, with Mashhad as its capital. Khorasan Razavi is home to numerous religious sites and places of pilgrimage, including the holy shrine of Ali al-Ridha (Imam Reza) — the eighth imam in Shiite Twelver Islam — and the Goharshad Mosque.

The judiciary and police in the province have recently stopped planned concerts by acclaimed traditional singers such as Shahram Nazeri and Salar Aghili. Explaining the cancellation of Aghili’s concert, Khorasan Razavi's General Prosecutor Gholam-Ali Sadeghi said, “There were some problems regarding the content and performance of concerts, as well as the outfits of the audience. … This led to different classes of people [such as] seminarians and senior clerics complaining to the prosecutor’s office about concert performances in the religious capital of Iran.”

In response to the repeated blocking of concerts, Jannati criticized the judiciary Aug. 7, saying, “This will be costly for the judiciary. … We should talk with high-ranking officials in the judicial system to resolve the issue. It is not possible for a province not to act under the law. A province is not a separate island.”

Jannati’s remarks were met with a furious reaction by the judiciary. Sadeghi stated soon after, “Calling off concerts costs the judiciary nothing. The duty of the judiciary is to stop illegal acts. … The minimum charge for the [culture] minister’s comments is spreading lies and disturbing the public opinion. If I, as a judiciary official, were in charge of pursuing his charges, I wouldn’t have hesitated for one second. I would have summoned him.”

Enter Ayatollah Ahmad Alamolhoda, the ultra-conservative Friday prayer leader of Mashhad and representative of the Supreme Leader to Khorasan Razavi province, who has always been critical of concerts. As tension increased between the Rouhani administration and the judiciary, Alamolhoda got involved to prevent the government from furthering its cultural agenda.

Comparing the headquarters of the Roman Catholic Church to Mashhad, Alamolhoda stated Aug. 12 that everyone respects the sanctity of the Vatican. “We should know that we live in the city where Imam Reza is buried. It is not possible to hold concerts in the city of Imam Reza, and we shouldn’t argue with people and some narrow-minded officials regarding this. If you want a concert, go live somewhere else,” Alamolhoda said.

A few days later, in a clear sign of retreat, the culture minister announced, “Considering the existence of the Imam Reza shrine in Mashhad, the holding of concerts has some opponents, including the dear representative of the supreme leader to Khorasan Razavi. We respect his opinion, and despite the fact that the concerts posed no problem, we are dissuaded from holding concerts there.”

When Jannati backed down, there were immediate objections by various officials and activists. Outspoken Deputy parliament Speaker Ali Motahari said, “The culture minister has retreated, and this is not right. Summoning him [to parliament] is possible. … The country isn’t federal and we can’t say Khorasan Razavi has autonomy and [implement] particular laws there.” Meanwhile, the moderate newspaper Jomhuri Eslami slammed the culture minister, arguing, “The Mashhad Friday prayer leader’s comment is not an obligatory order, because the duties of the Friday prayer leaders don’t include ordering around officials from the executive.”

The hard-liners' criticism of concerts appear to even be in conflict with Supreme Leader Ayatollah Ali Khamenei’s views. Mohammad-Javad Hojjati Kermani, a moderate cleric who lived with Ayatollah Khamenei in domestic exile before the 1979 Islamic Revolution, told Khabar Online on Aug. 14, “Alamolhoda’s comment is quite the opposite of the views of the supreme leader, 100%. Ayatollah Seyyed Ali Khamenei is an artist, poet, musicologist and scholar.”

The supreme leader has in the past expressed his views on music and concerts. In a notable speech two decades ago, he said, “The music in our region hasn’t been used for higher goals, which is in contrast to the path of music in Europe. You know that I am naturally anti-Western. Nothing in the West fascinates me. At the same time, I approve of the positive characteristics of the West. One of those attributes is music. … Informative and meaningful music has long existed there. … In the West, sometimes a nation has been saved by music.”

Even Rouhani has taken aim at Jannati, who apparently gave up on backing singers after facing rising pressure from hard-liners. Rouhani said Aug. 22, “In my opinion, none of the ministers should give up in the face of pressure. … Whoever wakes up in the morning and finds a tribune can’t set the law.” The president added, “It’s not good to act against the law. I swear to God that this is not good. It is worse when this is being done in the name of religion.”

Entering the fray, prominent Tehran University professor Sadegh Zibakalam said, “Mr. Jannati’s retreat has made Friday prayer leaders of other cities, under the influence of Alamolhoda, announce that no concert should be held in their cities [either]. … Ali Jannati has shown that he is in essence not a person who sticks to his positions and that he is a person who gives up and caves in at the blink of an eye.”

Jannati's clear retreat in the face of Alamolhoda’s objections will be costly for Rouhani’s reputation and lead to more opposition from hard-liners on other issues. Rouhani will have to decide whether to roll up his sleeves and seriously confront hard-liners or risk losing the people’s confidence.