Rouhani wins over Qom, for now

President Hassan Rouhani took a surprise trip to Qom to win over the support of senior clerics in Iran's religious capital. 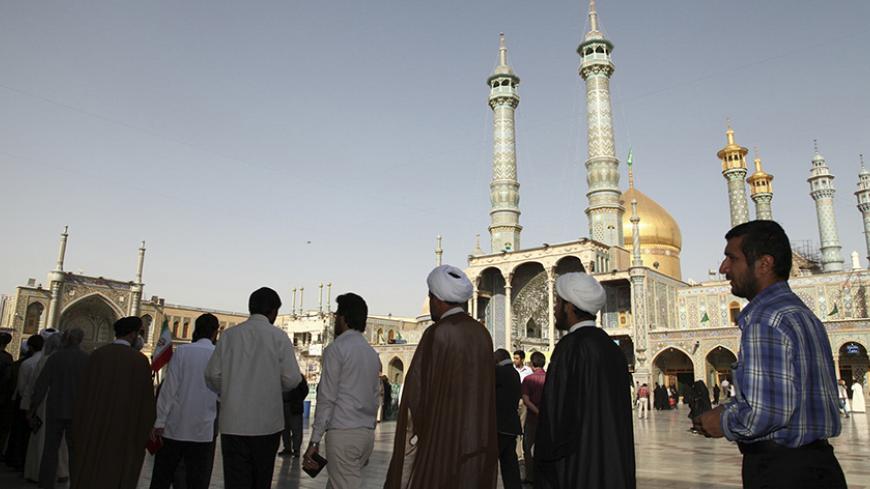 Men stand in line to vote during the Iranian presidential election at a mosque in Qom, 120 kilometers (74.6 miles) south of Tehran, June 14, 2013. - REUTERS/Mohammad Akhlagi

Iranian President Hassan Rouhani visited Iran’s holy city of Qom, located about 130 kilometers (80 miles) southwest of Tehran, on Feb. 25. Qom is considered the religious capital of Iran for its seminary, the prominent presence of clerics and grand ayatollahs, and the Holy Shrine of Fatima Masoumeh, sister of the eighth Shiite Imam.

Grand ayatollahs living in Qom have made this city unique and also an important center of power that has played a pivotal role in Iran’s politics. Today, the religious capital of Iran is where some of the country's most significant decisions are made. The implications of the city's opinion on political issues cannot be underestimated.

In February, a news story alleged that Iran’s Ministry of Culture issues a license for a solo female singer's album titled “Love You, O Ancient Land.” Following the news — which the ministry quickly denied — some of Qom's senior clerics protested the authorization of this album, though their objections were contrary to a decree issued by Ayatollah Ruhollah Khomeini, founder of the Islamic Republic, that was in favor of solo female singing.

Despite the ministry's denial that it issued such a license, criticism and complaints — which were rooted in opposition propaganda to Rouhani in Qom — persisted.

This continuous denunciation of the Rouhani government’s cultural policies led to Rouhani's tactical and timely decision to visit Qom. In the president's second trip to Qom, he sought the clergy’s support for the nuclear negotiations and his economic policies. The trip was noteworthy because Rouhani had to change his plans to visit Khorasan Shomali province.

The people of Qom — the majority of whom voted for Rouhani in the presidential election — took to the streets and welcomed Rouhani upon his arrival. Rouhani appeared on stage and succeeded in drawing people’s support. During a public speech, he described himself and his administration as the “children of seminary” and ensured residents and senior clerics that he wouldn’t do anything in opposition to Islam and the interests of Iran.

Rouhani then met with grand ayatollahs and senior clerics during meetings scheduled by his Chief of Staff Mohammad Nahavandian and his cultural adviser Hessameddin Ashena.

Rouhani’s opponents and hard-liners didn’t stand idly by during his visit. They tried to tarnish the president’s image by spreading rumors that he had given money to workers to attend his welcoming ceremony. They also distributed night letters — or covert leaflets — against him.

Rouhani has two staunch opponents in Qom: Ayatollah Mohammad-Taghi Mesbah Yazdi, spiritual leader of the hard-line “Endurance Front,” and Ayatollah Mohammad Yazdi, chairman of the Society of Seminary Teachers of Qom and the new head of the Assembly of Experts. Rouhani wasn’t the preferred candidate of Mesbah Yazdi or Yazdi during the 2013 presidential election. Both have stated their opposition to Rouhani’s political and cultural policies.

In one of his most controversial remarks against Rouhani, Mesbah Yazdi attacked Rouhani for obtaining his doctorate at the Glasgow Caledonian University, saying, “Some individuals with official positions who wear a turban, in response to an assembly over poor veiling and the concern of the clergy with religion and culture, introduce [those concerned] as people who do not know Islam, and accuse them of being delusional. So, where did you learn religion? From the Qom seminary or Britain?”

Likewise, Yazdi has slammed Rouhani, threatening to disclose his private warnings to the president in public.

Despite attempts to turn Rouhani’s Qom trip into a failure, Rouhani had successful meetings with grand ayatollahs, all of whom supported his policies and approved of his performance in the nuclear talks. Seemingly, they were also pleased with the Rouhani administration's cultural policies, given that we have not heard any condemnations of the Ministry of Culture from senior clerics since Rouhani's return to Tehran.

Grand Ayatollah Vahid Khorasani’s compliments of Rouhani were the highlight of the trip. Khorasani, who rarely talks politics and is highly influential in Qom, told Rouhani, “You're one of the best presidents and are faced with overwhelming problems.”

Rouhani’s meeting with Ayatollah Naser Makarm Shirazi, Ayatollah Jafar Sobhani and Ayatollah Hossein Nouri Hamedani, all of whom had previously criticized the administration, also bore fruit. In fact, they stated their support of administration policies regarding the nuclear talks and economy.

Nouri Hamedani said, “The Iranian nuclear negotiators are pious, revolutionary and hardworking.” Likewise, Makarem Shirazi expressed his hope for reaching a conclusion in the nuclear talks.

Moreover, conservative Ayatollah Sedighi, Tehran's interim Friday prayer leader, said, “We are thankful to God that the president had clear and promising stances in his meetings with senior clerics in Qom.”

Rouhani also surprised many by meeting with the Assembly of Qom Seminary Scholars and Researchers, which is the rival of the conservative Society of Seminary Teachers of Qom. Most of the assembly's members are Reformists who are critical of the outcome of Iran's 2009 presidential election, which led to unrest in Iran.

Ayatollah Mohsen Gharavian, a well-known cleric based in Qom, said, “The president’s trip resulted in the enhancement of the relationship between the government and Qom seminary.” He added that the grand ayatollahs and senior clerics treated Rouhani with both tenderness and respect, which “indicates the attention of grand ayatollahs to religious, moral, cultural and socio-economic issues.”

Rouhani’s Qom trip can be considered a victory, as all the senior clerics welcomed him and commended his policies. Prior to this visit, Rouhani’s opponents attempted to goad senior clerics into adopting critical positions against the administration, especially its cultural policies. Rouhani’s presence in Qom was an attempt to prevent not only more attacks but also to influence hard-liners.

Rouhani’s trip conveyed a message to his political opponents in this key city: “I have enough support here and have no anxiety over your conspiracies.” Although one shouldn’t assume that his opponents will listen to this message and stop attacking Rouhani, at least now Rouhani has the support of the grand ayatollahs on important issues, including nuclear talks, economic policies and — to some extent — cultural approaches, for the time being.