Iranian President Hassan Rouhani continues to be criticized for saying that the administration should leave religious direction in the hands of experts and the clergy. 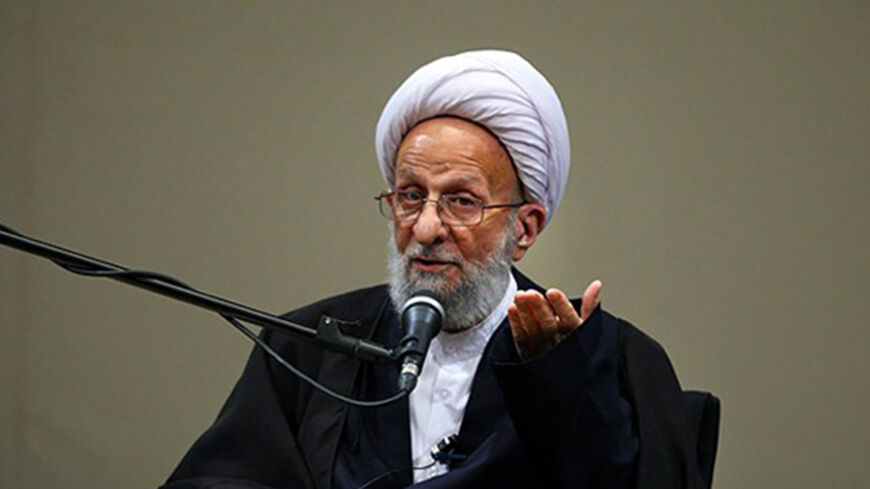 Hard-line cleric Ayatollah Mohammad-Taghi Mesbah Yazdi has not only criticized President Hassan Rouhani’s comments that religious affairs should not be in the hands of the administration, but has also questioned the president’s religious credentials.

Rouhani has been engaged in a public debate with a number of hard-line clerics over the enforcement of religious and cultural norms in society. In public speeches, he said some clerics obsessed with the Iranian people's afterlife had “delusions” and did not know religion. He also called for religious affairs to be handled by religious experts and clergy rather than the administration.

Without addressing Rouhani by name, Mesbah Yazdi said, “Some individuals with official positions who wear a turban, in response to an assembly over poor veiling and the concern of the clergy with religion and culture, introduce [those concerned] as people who do not know Islam, and accuse them of being delusional.”

Mesbah Yazdi asked, “Where did you learn religion? From the Qom seminary, or Britain?” Rouhani, who has the status of Hojat al-Islam (Islamic authority), studied in Qom in the 1960s, attending classes by prominent ayatollahs. He also received a BA in judicial law from the University of Tehran and a PhD from Glasgow Caledonian University in Scotland.

Mesbah Yazdi continued, “The separation of religion from politics and expressing this subject that religion is the responsibility of the clergy, not the administration, is the same slogan of the National Front that unfortunately is heard from some officials who wear a turban.”

The member of the Assembly of Experts and director of the Imam Khomeini Education and Research Institute in Qom said that late Supreme Leader Ayatollah Ruhollah Khomeini had been critical of clergy who remained silent “when Islam was in danger.”

Mesbah Yazdi said, “That some say the administration does not have a responsibility for the people’s religion, but that the administration’s only responsibility was to remove the sanctions — and not through resistance but through diplomacy — is against Imam [Khomeini]’s path. Did Imam start an uprising because of sanctions and the economy? Did this many martyrs sacrifice their lives for their stomachs and sanctions?”

Mesbah Yazdi’s comments, particularly on Rouhani’s religion credentials, are a stinging attack in the world of conservative Qom politics. Considered the spiritual father of former President Mahmoud Ahmadinejad before their falling out, Mesbah Yazdi is one of the more prominent and outspoken hard-line clerics in Iran.

Rouhani’s comments mocking those obsessed with the afterlife were aimed at two conservative clerics: Ayatollah Ahmad Khatami and Ayatollah Ahmad Alamolhoda. They both publicly criticized the president for saying, “One cannot take people to heaven through force and a whip.” While the comments centered on religion and the afterlife, they are essentially about the government’s role in society, particularly religious affairs.

The country’s top prosecutor and judiciary spokesman, Gholam-Hossein Mohesni-Ejei, also entered this debate today, June 4. He said that Ayatollah Khomeini “endured many hardships and pains and undertook many efforts in order to take people to heaven and keep them from hell. But today, some people don’t have anything to do with people’s heaven or hell, don’t send someone to heaven through compulsion.”