Revolution at 40: Qom seminary at crossroads over clergy’s future in Iran

On the 40th anniversary of the Iranian Revolution, the Qom seminary is torn in a struggle that may very well once again decide the future of Iran. 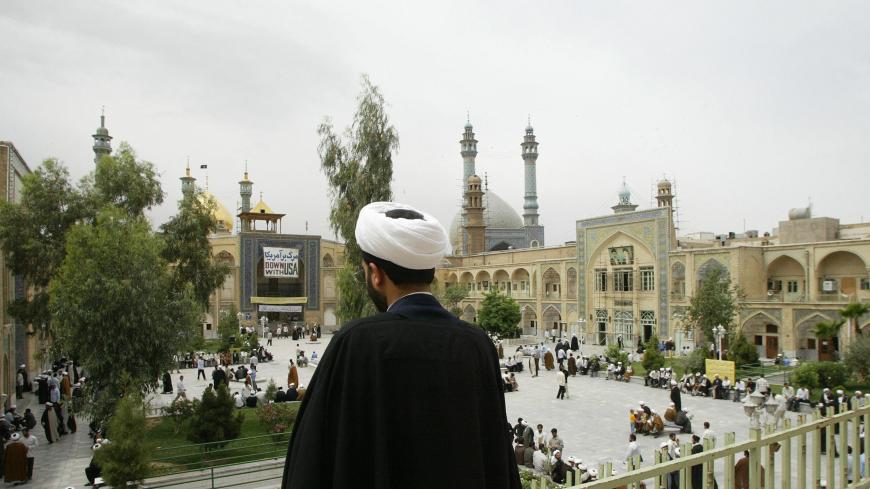 An Iranian cleric student looks at the courtyard of the Faiziyeh religious school in Iran's clerical capital, Qom, Iran, May 18, 2005. - BEHROUZ MEHRI/AFP/Getty Images

Forty years after the 1979 Iranian Revolution, the holy city of Qom is once again caught in a struggle over the future of the seminary — and perhaps the country. But while the essence of the clash may not be novel, the camps — and indeed the broader composition of the seminary — have vastly changed.

Sheikh Abdolkarim Haeri Yazdi established the Qom seminary in 1922. After his death, many senior Shiite clerics urged Ayatollah Seyyed Hossein Borujerdi to chair the institution, which he eventually accepted. Soon, Borujerdi became the sole "marja," which is the supreme religious authority in Shiite Islam. Like many of his predecessors, he largely avoided entering politics — partly due to the persecution of activist clergy in the aftermath of the 1905-11 Iranian Constitutional Revolution. Hence, Borujerdi's priority was to rather focus on enhancing the stability and position of the seminary. In this vein, he did not enjoy a good relationship with a number of politically active clerics, such as Ayatollah Abol-Ghasem Kashani as well as the Fada'iyan-e Islam, a group led by cleric Navvab Safavi who was later executed by the shah’s regime.

Borujerdi’s largely apolitical posture earned him the Iranian monarch’s respect, and yet he was also feared. For instance, following the Grand Ayatollah's positioning against the Bahai faith — an "unacceptable" offshoot of Shiite Islam to the clerics — the shah in 1955 ordered the destruction of the national Bahai center in Tehran. Yet after Borujerdi’s death in 1961, the shah decided to send his condolence message to a quietist ayatollah based in Iraq, Seyed Mohsen Hakim, rather than to any of the senior clerics in Iran in a failed effort to strengthen Najaf’s claim to supremacy in its rivalry with Qom.

Around that time, Ayatollah Ruhollah Khomeini was a senior teacher at the Qom seminary under the umbrella of Borujerdi. Known as the "foreign minister" of the marja, he had met with the shah — albeit only on religious matters — since his patron had requested that he abstain from entering politics.

Ayatollah Khomeini kept his word, only breaking his silence after the death of Borujerdi. In 1963, he issued a fatwa to forbid "taqiyya" — the concept of precautionary dissimulation in Shiite Islam — as he believed a number of clerics were resorting to it to keep silent over what he saw as objectionable actions on the part of the shah. Ayatollah Khomeini was at the time among the most influential teachers at the seminary, and when faced with an apparent plan by the shah’s regime to prosecute him, he was backed by four grand ayatollahs as a new marja since the latter could not be prosecuted under the constitution.

As such, Ayatollah Khomeini was prior to the 1979 revolution the leader of one of three main currents in the seminary, namely the clerics who were explicitly and wholly opposed to the shah. Formulating his theory of “Islamic government” in Najaf in 1970 — where the shah exiled him — other members of this circle included current Supreme Leader Ayatollah Ali Khamenei, Ayatollah Morteza Motahari and Ayatollah Akbar Hashemi Rafsanjani. There were other activist clergymen in these circles — although they were reactionary — such as Seyyed Monir-oddin Hosseini, the founder of the Academy of Islamic Science. These figures generally did not enjoy a good relationship with Ayatollah Khomeini.

A second camp in the seminary consisted of the grand ayatollahs and traditionalists, who pursued the quietism of Borujerdi and remained anxious about a repetition of the aftermath of the Constitutional Revolution. Its most prominent figures included Ayatollah Mohammad Reza Golpaygani, Ayatollah Ahmad Khansari and Ayatollah Shahab al-Din Marashi Najafi.

This camp also included traditionalists mainly preoccupied with countering Christianity and Bahaism in Iran. For instance, the On the Right Path institution, which was devoted to combating the promotion of these faiths, was managed by figures such as Ayatollah Mohammad Taghi Mesbah-Yazdi, the spiritual head of Iran’s current hard-line camp. The Hojjatieh Society, set up as an anti-Bahai outfit by Sheikh Mahmoud Halabi in 1953, also belonged to this current. The latter organization in principle also opposed the notion of the Guardianship of the Jurist, and while active after the revolution, was nominally dissolved in 1983.

The third current in the seminary consisted of what may be described as moderate opponents of the shah’s regime. These clerics, including Ayatollah Mohammad Kazem Shariatmadari and Ayatollah Mohammad Hadi Milani, were critical of the monarchy but did not seek to topple it. Rather, they demanded the full implementation of the constitution to limit the shah’s powers. Indeed, up until a few months before the revolution in 1979, Ayatollah Shariatmadari requested the holding of free elections. Of note, Ayatollah Naser Makarem Shirazi and Ayatollah Jafar Sobhani — the two current maraji based in Qom — are among the students of Shariatmadari.

After the 1979 revolution, the activist clergymen gained power for the first time. In the subsequent decade, the traditionalists were still committed to their own views, although some among its ranks who sought to enter the field were marginalized. Now, 40 years after the revolution, the struggle for dominance over the Qom seminary is between four main groups:

The heart of the current and ongoing clash at the Qom seminary centers on the nature of political activism among clerics. Hard-liners believe that the seminary has not done enough for the political system and thus want it to be more revolutionary. They are now charging the seminary with having become a center of “secularism” and accuse instructors of only teaching apolitical Islamic jurisprudence while they ought to focus on "theorizing religious civilization." As such, many of the current teachers have been labeled as "secular" while the hard-liners have nurtured their own instructors and groups to dominate the seminary.

As part of this clash, there has been a parallel confrontation about history — or rather the attempted rewriting of it. The latter has centered on the role of certain clerics in the revolution and thereby the credibility and legitimacy of their current activities. For instance, moderate clerics charge that Ayatollah Mesbah-Yazdi and other hard-liners had no role in the victory of the revolution. Here it is notable that a number of figures have been claiming that Ayatollah Mesbah-Yazdi and Halabi were in fact among the supporters of Ayatollah Khomeini prior to the revolution.

What is vital here is that the fundamentalists who had been marginalized by Ayatollah Khomeini, as well as those traditionalists who did not believe in combating the shah’s regime, appear to have formed an unannounced alliance with the aim of seizing control of the seminary. To be clear, the hard-liners of the Society of Seminary Teachers of Qom led by Ayatollah Yazdi, the Academy of Islamic Science currently led by Ayatollah Mohammad-Mahdi Mir-Baqeri and the circle around Ayatollah Mesbah-Yazdi have been empowered in the past two decades and are now working hand in hand against the moderates of the seminary.

The potential implications of the outcome of the struggle for control over Qom should not be underestimated. Once again, it may very well decide the future direction of Iran.