Conservatives are suspicious of foreign influences as Iran prepares to hold key elections. 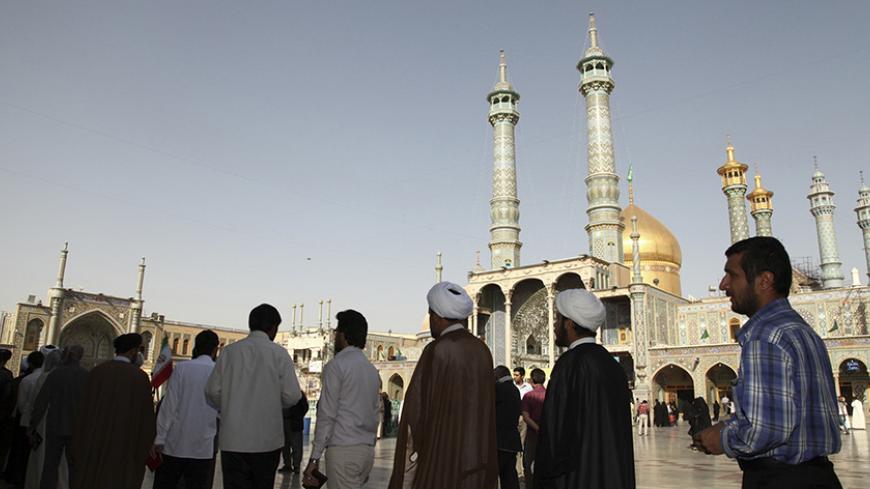 Men stand in line to vote during the Iranian presidential election at a mosque in Qom, June 14, 2013. - REUTERS/Mohammad Akhlagi

QOM, Iran — On the walls surrounding the grave of “Fatima the Infallible," the names of the most prominent ayatollahs in Iran can be read. Their graves are situated under the marble covering the grounds of the shrine, which belongs to the sister of Imam Reza — the eighth Imam of Shiite Islam — who lived and died in modern-day Iran some one thousand years ago.

Around the shrine, the famous city of Qom, about 80 miles south of Tehran, grew to become the most significant center for Shiite theology, besides Iraq’s Najaf, bringing together the most important Islamic scholars.

While dead ayatollahs lie under the marble, future ones sit on top of it. They gather in circles to study and debate — some holding books, others with laptops. Meanwhile, the voices of worshippers around them are heard praying and crying. All of this comes together to form the shrine’s unique sound.

There, Al-Monitor met Hussain, a scholar who seemed taken with the heightened political debate as elections approach for the Islamic Consultative Assembly (also called the Iranian parliament) and Assembly of Experts, an 88-member body of mujtahids, or senior Islamic clerics, who elect the supreme leader, the country's highest ranking political and religious official.

Hussain said he believes foreigners want to interfere in the elections, mainly by targeting three candidates for the assembly: incumbent Assembly Chairman Mohammad Yazdi, hard-line cleric Ayatollah Mohammad-Taghi Mesbah Yazdi and Guardian Council head Ahmad Jannati. “These [three] are the defenders of the revolution,” Hussain told Al-Monitor, adding that defending the trio is akin to defending the 1979 Islamic Revolution itself, in which the shah was overthrown.

Large posters of Mesbah Yazdi cover the area around the shrine. He is slated to speak before supporters who, like Ali, an English-speaking seminary student, seem angry about the foreign media.

“The foreign media is trying to influence voters," said Ali, "The Persian-language channels are sending messages to people, calling on them not to vote for the revolutionary candidates.”

Ali told Al-Monitor, “People know well that the British are targeting the revolution. They want their candidates to win so they can have control over the country like before.”

Hostility is running very high among Qom's conservative clerics — or “revolutionary” clerics, as they prefer to be called — toward the other lists in the parliamentary and assembly elections. “Those who are praised by the West can’t be trusted,” Ali said.

Qom is important for any mujtahid who seeks endorsement for his Assembly of Experts candidacy. The Society of Qom Seminary Teachers is one of the two most important clerical associations in Iran, along with the Society of Combatant Clergy. If these two bodies support a cleric's candidacy, he has a strong chance of winning.

Incumbent parliament Speaker Ali Larijani hails from Qom. Being a renowned conservative, he surprised many by deciding to run as an independent. “I’ve not separated from the Principlists [Party], but there are differences in our way of thinking,” Larijani said at a campaign gathering. “I don’t accept the accusation that Reformists aren’t revolutionaries,” he added.

In the streets of Qom, pictures of Larijani can be seen almost everywhere. The incumbent speaker won the endorsement of the Society of Qom Seminary Teachers. The Reformists have also placed Larijani on their joint ticket with moderates, who are said to be backed by President Hassan Rouhani. And while Larijani isn’t the only candidate in Qom, he is the most prominent. He and others will have to contend for the 1 million potential votes in the city, which can send three lawmakers to Tehran.

In a coffee shop near Bastani Square, Al-Monitor met with Bagher, another seminary student. The cafe showed no traces of being situated in Qom. Decorated with pictures of Salvador Dali, Charlie Chaplin, Albert Einstein, Al Pacino, Leonardo DiCaprio and others, it might have been anywhere in the world. However, two grand photos of Ayatollah Ruhollah Khomeini and Ayatollah Ali Khamenei, the two supreme leaders in the history of the Islamic Republic, brought one back to Iran.

Like Ali, Bagher is critical of foreign media. He said he believes international media outlets are trying to present Iran inaccurately.

“There are three main models dominating the world today,” Bagher told Al-Monitor. “The Western model, the Daesh [Islamic State] model and the Islamic Republic of Iran’s model; you can’t mix any of these three.” (Bagher sees the Eastern model of governance and society as no longer relevant.)

“When some try to say Iran is a democracy similar to the West, they are wrong. [They] might be people who love Iran, but they don’t understand that you can’t draw a line between Iran and Daesh by saying that Iran is closer to the West,” he said.

“Iran isn’t a democracy. We have our own model, namely ‘religious democracy,’ which means that we follow the authority of the people. The people of this country legitimize the power of the regime and the government on religious conditions." This is what Ayatollah Khomeini said in his 1970 book, "Islamic Government," and his successor, Ayatollah Khamenei, later institutionalized, Bagher said.

The idea Bagher was referring to was first spoken about in Qom, where Ayatollah Khomeini in the early 1960s gave his lectures in the Fayziyeh School — inside the shrine of Fatima the Infallible. Back then, a new line of thought among Shiites appeared, and for the first time in centuries, it included a call for seizing power and ruling in accordance with Islamic teachings. This was seen as the revolution — not just against Shah Mohammad Reza Pahlavi, but also against the mainstream seminary. Decades later, as Iran is about to hold key elections, it appears the country is still in the grip of a struggle for the soul of the revolution — and what it means.