In Iran, religious titles lie at heart of political games

Despite pushback from senior figures such as Grand Ayatollah Ali al-Sistani, the politicization of clerical ranks in Iran continues unabated. 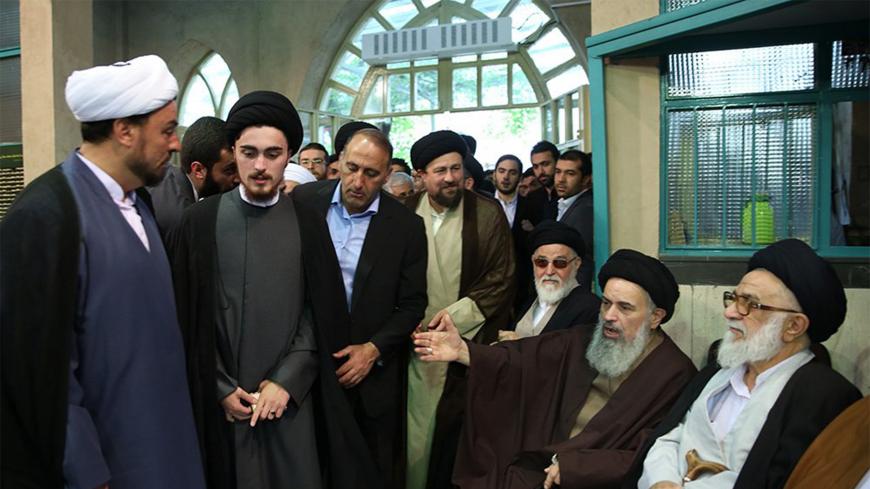 Ahmad Khomeini (2nd L), the great-grandson of the founder of the Islamic Republic, meets with other clerics. Posted May 4, 2018. - Twitter/@Sweden_Dennis

In Iran, the robing ceremony of Ahmad Khomeini, the great-grandson of Islamic Republic founder Ayatollah Ruhollah Khomeini, has stirred some debate about the Shiite clergy. The traditional ceremony where he was given his turban comes against the backdrop of a process in which clerical titles in the country have increasingly come to be driven by political rather than scholarly considerations, with virtually all factions, parties and groups using ranks in the Shiite theological hierarchy for their own political purposes. But has it always been like this in Iran?

Before engaging in the debate on the politicization of clerical titles, it is perhaps best to explain their origins. In broad terms, Shiite clerics fall under five categories: Seqat al-Islam, Hujjat al-Islam, Hujjat-al-Islam wal-Muslemin, Ayatollah and Ayatollah al-Uzma.

Before the reign of the Pahlavi dynasty (1925-1979), titles like Ayatollah or Seqat-al-Islam were used chiefly as honorifics, albeit rarely and only with reference to a limited number of prominent Islamic scholars. For instance, Muhammad ibn Ya'qub al-Kulayni (864-941) was a well-known Shiite scholar and hadith (sayings of the Prophet Muhammad) collector. His important hadith collection Kitab al-Kafi, which is respected by both Sunnis and Shiites, earned him the honorific Seqat al-Islam, which means “Trusted by Islam.” Indeed, to this day, Islamic scholars commonly refer to Kulayni when mentioning the term Seqat al-Islam. There is also the example of Iranian-born Abu Hamid Muhammad ibn Muhammad al-Ghazali, one of the most prominent philosophers, jurists and mystics of Sunni Islam. He was often referred to as Hujjat al-Islam, which means “Proof of Islam.”

From the Qajar era (1794-1925) until the early Pahlavi period, many great scholars and high-ranking clerics in Iran were still referred to with simple titles, including the honorific “Sheikh,” which is used to refer to clerics who are not descendants of the Prophet Muhammad.

In 1921, Sheikh Abdolkarim Haeri Yazdi, a high-ranking teacher in the holy Iraqi city of Karbala who had established a successful seminary in the central Iranian city of Arak, established the Qom Seminary. Known as the “Founder Ayatollah,” he organized seminary affairs, including standardizing courses and ranks. Clerical titles have since gradually been employed to designate scholarly achievements. Of note, the Islamic Republic’s founder, Ayatollah Ruhollah Khomeini, was one of Haeri Yazdi’s students.

Today, theological students at Iran’s seminaries have to pass various courses to obtain respective titles. For instance, beginners and those who are studying what is referred to as “initial” courses are bestowed with the honorific Seqat al-Islam, albeit it is rarely used in contemporary Iran. Hujjat al-Islam is used to refer to clerics who have passed the grade known as “Sath” and enter “Khawrej,” in which studies of advanced jurisprudence (ijtihad) are initiated. The clerical rank Ayatollah, which means “Sign of God,” is bestowed on those who have passed the “Khawrej,” namely Islamic jurists (mujtahid). Lastly, there is the highest rank of Ayatollah al-Uzma (“Grand Ayatollah”), who can issue fatwas (religious edicts) to execute Islamic law.

In the decades since the 1979 Islamic Revolution, both Reformists and conservatives in Iran have each sought to take advantage of these titles to belittle or promote their respective leaders’ status in society. For instance, hard-liners often referred to former President Akbar Hashemi Rafsanjani as Hujjat al-Islam before his death in early 2017, while the Reformists, moderates and pragmatic conservatives referred to him as an Ayatollah. Rafsanjani, a two-time president, was the figurehead of the moderate camp in Iran and respected by Reformists, especially in later years.

Even now, Grand Ayatollah Yousef Sanei, who has come under attack since questioning the results of the disputed 2009 presidential election, is now referred to as a Sheikh by hard-liners, a method used simply to humiliate him. However, the Reformists use the same playbook — and especially in retaliation.

Senior titles such as Ayatollah are on occasion given to clerics who are either appointed to top religious positions or set to run for office. This trend has mostly been seen among hard-line and conservative figures. For instance, prior to the 2017 presidential election, conservative candidate Ebrahim Raisi was initially referred to as Hujjat al-Islam, but gradually, hard-line media such as Tasnim News Agency and Fars News Agency started referring to him as “Ayatollah.” The process of this apparent promotion in his rank, beyond his candidacy for office, was initiated with his appointment in March 2016 as the custodian of the holy shrine of Imam Reza in the northeastern city of Mashhad. This office entails control of Astan-e Quds Razavi, one of the wealthiest foundations in Iran. As the consensus conservative candidate in the 2017 elections, Raisi garnered more than 16 million votes but was defeated by incumbent Hassan Rouhani, who obtained more than 23 million votes.

The politicization of clerical titles, including their use to either humiliate foes or launch careers, has not taken place without controversy. Indeed, these practices have been objected to by grand ayatollahs such as Vahid Khorasani and the late Abdul-Karim Mousavi Ardebili. To symbolically combat this trend and competition among clerics, a number of grand ayatollahs, including Ali al-Sistani, have ordered their offices to remove the words “Grand Ayatollah” from their names on their Persian websites. While these measures have been lauded, they have clearly failed to stop the tendency to play with clerical titles. Indeed, to end the politicization of scholarly ranks, there will need to be a decisive and firm decision by the Qom Seminary and a collective position of grand ayatollahs against their misuse.

Despite the negative implications of these practices, they do appear to benefit one group in particular: journalists and political analysts. To understand which particular cleric a faction or political camp seeks to nominate for an election — whether it be for the presidency or the Assembly of Experts, or even internal party polls — one merely needs to review the speed of progression in clerical ranks of an individual and the manner in which those ranks are achieved.