A senior hard-line cleric’s sniping at a grand ayatollah for meeting with Reformists has sparked a backlash that is revealing the depth of clerical opposition to radical conservatives. 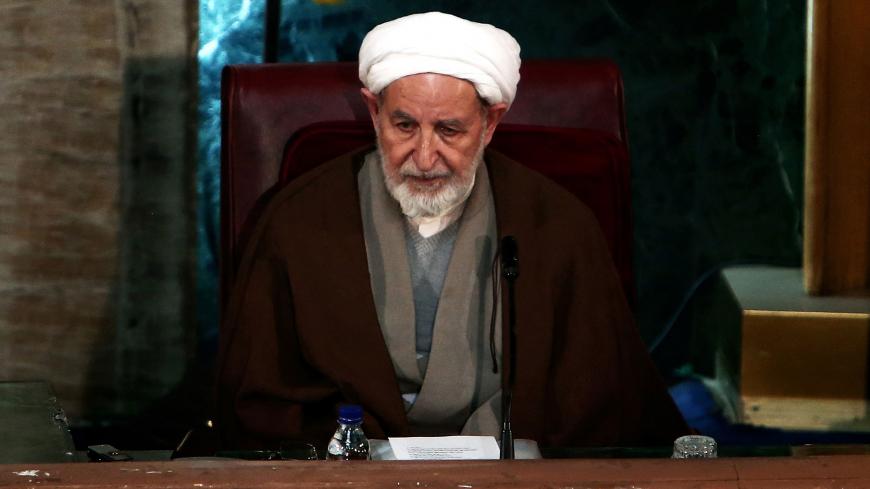 Iranian media was stunned late last month by what was nothing less than an earthquake in the holy city of Qom, home to the leading Shiite seminary in the country. On Oct. 27, hard-line Ayatollah Mohammad Yazdi, the secretary of the influential Society of Seminary Teachers of Qom, published an open letter addressed to Grand Ayatollah Musa Shobeiri Zanjani. Adopting a harsh tone, Yazdi lashed out at Shobeiri for meeting with a number of figures "who do not respect the Islamic Republic’s establishment and the Supreme Leader." He then proceeded to "remind" Shobeiri, who holds the highest clerical rank, that the admiration he enjoys is dependent on his respect for the political system. The perhaps most controversial part of the letter was how Yazdi — an ayatollah — was instructing a grand ayatollah not to “repeat” such actions.

The open letter came in the wake of Shobeiri’s meeting with Reformist leader Mohammad Khatami, a former president (1997-2005) who has for years been banned from Iranian media by the authorities. The reason for the ban is that the hard-liners believe that Khatami is no longer loyal to the political system, a conviction that has been repudiated by Reformists and moderates alike.

Who is Grand Ayatollah Shobeiri Zanjani?

Born in Qom in 1928, Shobeiri followed his father’s path in becoming a cleric. Although widely respected, he avoided publishing his "risalah" until a few years ago. (A risalah is a book containing jurisprudential rulings and fatwas of a particular mujtahid about various issues.)

Shobeiri enjoys a good relationship with a broad spectrum of clerics in Qom and is generally viewed as symbolizing clerical independence. The grand ayatollah has never entered politics, unlike peers such as Grand Ayatollah Naser Makarem Shirazi, who often enters debates on such matters. Moreover, Shobeiri has never declared support for any electoral candidate nor accepted any governmental jobs and positions, rather focusing on his study of Islam.

His avoidance of politics has led him to meet with figures including clerics who are in disagreement with the political establishment and especially the hard-line camp. Indeed, long-running irritants for the hard-liners include Shobeiri’s friendships with late Grand Ayatollah Hossein-Ali Montazeri as well as Reformist Grand Ayatollah Abdul-Karim Mousavi Ardebili. Shobeiri notably opposed the Islamic Republic’s decision to put Montazeri, an opposition leader, under house arrest for over a decade until his death in 2011. In this vein, Shobeiri has also mediated the release of a number of political activists.

What should not be ignored here is that Shobeiri has in parallel maintained an amicable relationship with Supreme Leader Ayatollah Ali Khamenei, whose sons have attended his classes.

The grand ayatollah has always avoided the media and political discussions. Indeed, even in the face of Yazdi's letter, he has preferred to remain silent and asked his office not to declare any position. As such, he in reality represents a spectrum of Shiite jurists who will only involve themselves in scholarly activities. Reflecting this sentiment — which is anathema to the hard-liners — Shobeiri stated in a rare speech Jan. 29, "A number of gentlemen think that if they overly enter political discussions, they can better protect the clergy's position, … [but] we believe that this can weaken religion."

The source of Yazdi's letter

Yazdi's open letter was penned two months after a contentious summit in Qom in which a hard-line theoretician accused the seminary in the holy city of being “secular” and not backing the political establishment when needed. On Aug. 16, hard-liner Hassan Rahimpour Azghadi stated at a rally that the Qom seminary only "focuses on secular Islamic jurisprudence instead of theorizing religious civilization.”

Yazdi’s controversial letter has once again brought the issue of the seminary's independence to the fore. Of note, being among the most prominent hard-line figures in Qom, he has repeatedly called for a "revolutionary seminary," and has slammed senior instructors in the holy city for avoiding politics.

In a speech in December 2017, Yazdi criticized teachers and professors at Qom seminaries for not paying attention to politics. "How many times have they talked about the political system … in their classes so that the students may reach a decision to support the political system or not?" he said in a direct hit at senior independent instructors.

The harsh rhetoric and warnings by the likes of Yazdi stem from their anxiety that the Qom seminary may steer toward secularism. This belief is rooted in the view that the seminary does not sufficiently generate support for the issues the political establishment is grappling with. Yet at the same time, the hard-liners’ attempts to convince the seminary to stand behind the political system has backfired, prompting a number of clerics to emigrate to the seminary in the holy city of Najaf in neighboring Iraq.

The importance of the harsh reactions of the Qom seminary against the open letter is that it demonstrates the deep opposition to the political current that Yazdi represents. Right after the publishing of the letter, many of the senior clerics and grand ayatollahs in Qom — including Ayatollah Abdollah Javadi-Amoli — visited Shobeiri in an apparent message to the hard-liners.

Yazdi’s maneuver has thus been a strategic mistake as the silent part of the seminary, which is opposed to the hard-liners and steers clear of politics, was awakened, as it saw the position of the Shiite clerical leadership and its independence being endangered, leading even to the influential Society of Seminary Teachers of Qom to retreat and be divided. Indeed, the latter emphasized that the letter was not issued by the society but rather was only the position of Yazdi himself. Moreover, a leading member of the society wrote an open letter to Yazdi to declare his resignation from the group.

Meanwhile, in an unprecedented letter, 84 prominent seminary teachers issued a statement Oct. 29 to condemn Yazdi's remarks, writing, "No political establishment will [survive] by [resorting] to insults against [esteemed] figures of society and threatening them."

Furthermore, Seyyed Hassan Khomeini, the grandson of the founder of the Islamic Republic, issued a statement Oct. 29 to express his regret over the "insult" against Shobeiri, further infuriating the hard-liners who claimed that he is siding with the enemies of his grandfather's approach. The younger Khomeini had dared to argue, "The protection of [the Islamic Republic] is not only dependent on the Shiite clergy being absorbed by the establishment, but also [tied to] the independence of the seminary and the maraji [top clerics]."