Iran’s seminary and social media have been stunned by a letter threatening a grand ayatollah over his personal meetings. 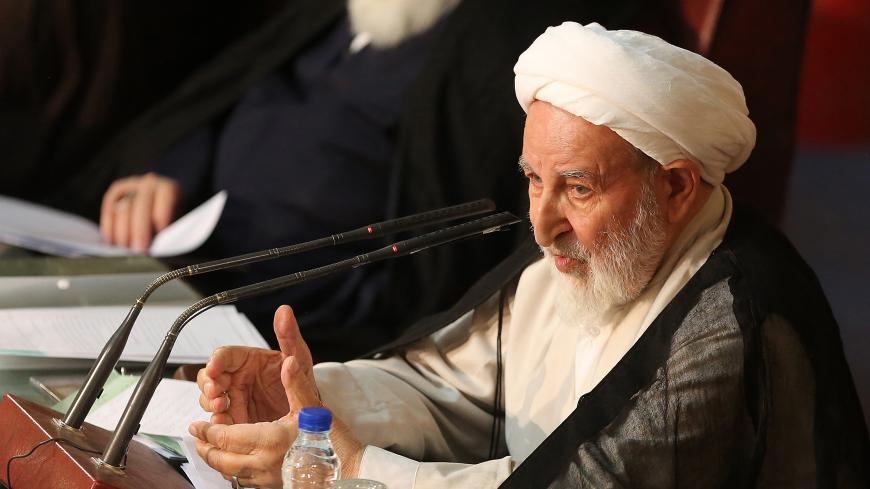 The normally closed world of Iran’s Shiite seminary has been stunned by a scandal after a grand ayatollah was threatened about his personal meetings with those deemed not supportive of the Islamic Republic.

Ayatollah Mohammad Yazdi, current chairman of the Assembly of Experts and former head of the judiciary for 10 years, wrote a public letter to Grand Ayatollah Mousa Shubairi Zanjani on Oct. 27 about “pictures of meetings with problematic individuals who do not have respect for the Islamic Republic and the Supreme Leader [Ayatollah Ali Khamenei].” Yazdi did not mention names, but the incident he was referencing was a meeting Zanjani had with former Reformist President Mohammad Khatami and Ayatollah Mohammad Mousavi Khoeiniha.

Yazdi, who is also head of the conservative Society of the Seminary Teachers of Qom, wrote that he had spoken to Zanjani twice before about other issues but had not “received a satisfactory response” and therefore “had no choice but to present this letter publicly.” Yazdi accused Zanjani of snubbing meetings with conservative groups in Qom, where he is based, but making time to meet with these “problematic” individuals in Tehran. The most shocking aspect of the letter, which caught many Iran observers by surprise, was Yazdi’s warning to “not let it happen again.”

Since the 2009 election, which was contested by Reformists, Khatami has become persona non grata within the establishment. The judiciary has imposed an unofficial media ban on the former president, and in the rare instance when media is forced to publish his picture, his face is often blurred. Khatami is also no longer invited to official state functions. Still, Khatami is not under any type of house arrest, as the 2009 presidential candidates still are, and there is no judiciary case against him. Yazdi’s letter against a cleric senior to him portends an even more restrictive political climate in which hard-line officials make up the rules as they go.

Zanjani’s office released a statement saying that the senior cleric would not respond to the letter and would remain silent, but that his students and junior clerics who study under him would respond. The Qom Seminary, the largest and oldest Islamic seminary in Iran, issued a statement condemning the letter, saying, “Slandering a grand ayatollah for a personal action and determining [who he can meet with], with the excuse of defending the Islamic Republic and the supreme leader, will have no result but weakening the Islamic Republic and the seminary." The letter, which was signed by 84 clerics, stated ominously, “No government which insults its figures and threatens them is sustainable.”

There were a number of reactions on social media as well. An Iranian journalist rightly noted that hard-liners cannot help themselves but to interfere in the private life of a grand ayatollah, yet some people expect them to leave the private lives of ordinary citizens alone. Hesamodin Ashna, media adviser to President Hassan Rouhani, sarcastically thanked Yazdi for “introducing the younger generation to Ayatollah Shobayri Zanjani and those seeking a moderate Islam.”

On Oct. 27, Iran’s parliament also approved four new ministers for the Rouhani Cabinet. Mohammad Shariatmadari, who was previously the minister of industry, mine and trade, became the minister of cooperatives, labor and social welfare. Shariatmadari received 196 votes despite previous accusations of corruption as the head of his previous ministry.