The president of the Society of Seminary Teachers in Qom has said that President Hassan Rouhani was issued unofficial warnings and that if he fails to heed them, he would be officially cautioned. 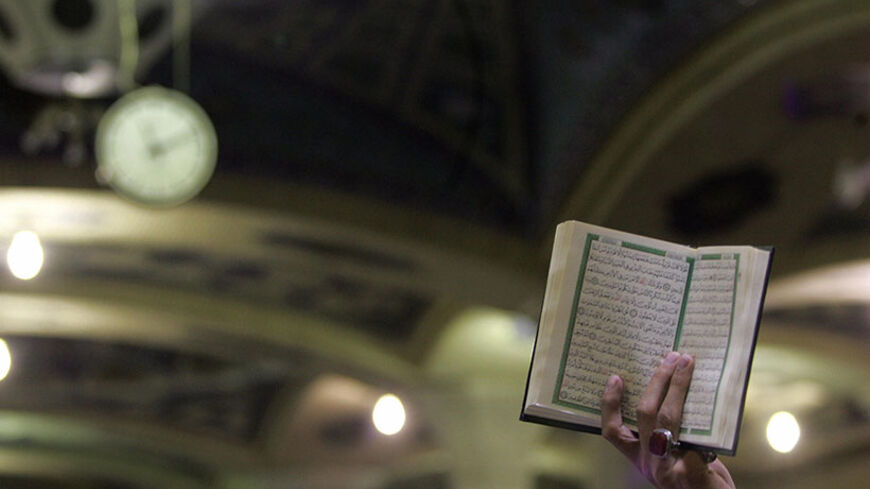 An Iranian Muslim cleric holds a copy of the Quran during in the auditorium of the Feyzieh, the main seminary school in Iran's clerical epicenter of Qom, Sept. 17, 2006. - ATTA KENARE/AFP/Getty Images

The president of the Society Seminary Teachers of Qom, an influential religious conservative body, said that President Hassan Rouhani had been issued an “unofficial” warning.

“Recently, the Society of Seminary Teachers gave a few warnings to the honorable president,” Ayatollah Mohammad Yazdi told Mobahesat. “But I’m certain that if the president does not pay attention, the Society of Seminary Teachers will turn these unofficial warnings to official warnings.” He added, “There is a possibility that one day there will be a confrontation.”

Ayatollah Yazdi did not say which issues prompted the group to issue the warnings. In the last month, the president has been engaged in a public war of words with conservative clerics over the role of government in the personal lives of Iranian citizens.

On May 24, Rouhani said, “One cannot take people to heaven through force and a whip.” He was immediately attacked by Ayatollah Ahmad Khatami and Ayatollah Ahmad Alamolhoda, two influential conservative clerics in Iran. Rouhani responded, without naming names, that critics of his comments are “delusional” and that they did not know what religion is.

The Society of Seminary Teachers was established in 1961 by a number of clerics in Qom. Its primary focus was to oppose to the government of Shah Mohammad Reza Pahlavi. After the revolution, the group became instrumental in shaping the structure and laws of the Islamic Republic of Iran. Its main purpose today is to monitor and control the seminary in Qom and to make sure the different institutions within Iran operate within the religious boundaries it sets forth.

One of its more controversial roles has been to determine the status of clerics. After the revolution, the society declared that Grand Ayatollah Mohammad Kazem Shariatmadari was no longer a marja over his opposition to the direction of the revolution and former Supreme Leader Ayatollah Ruhollah Khomeini’s policies.

More recently, the society demoted Grand Ayatollah Yousef Sanei to "hojat al-Islam" for his support of the 2009 Green Movement. However, given the seminary's historical lack of a formal structure, these demotions of status are not accepted by everyone. Rouhani himself holds the status of hojat al-Islam.

Ayatollah Yazdi also said that the society had issued warnings to former President Mahmoud Ahmadinejad as well. “In the final months [of his presidency], Mr. Ahmadinejad really committed misdeeds and many of the clergy confronted him,” he said. “The same clerics who had helped him … warned him, but he did not listen. In reality, in the final months, his trust saw a lot of damage.”

He continued, “The same honorable cleric who paid dearly to bring Ahmadinejad to office … and saw that he didn’t listen to other people’s words, the same cleric entered the debate and said, ‘Ahmadinejad is not the basis; God’s religion is the basis.’ Those who heard it understood that as long as Ahmadinejad abides by religious [values], they will accompany him.”

While Yazdi did not mention names, he was addressing Ayatollah Mohmmad Taghi Mesbah Yazdi’s support for the former president. Mesbah Yazdi, one of the most hard-line clerics and a vocal critic of Rouhani, was considered Ahmadinejad’s "spiritual father" at one point. The two had a falling out when Ahmadinejad openly clashed with Supreme Leader Ayatollah Ali Khamenei.