Despite his attacks on the Qom Seminary, Hassan Rahimpour Azghadi continues to rise as a prominent and popular figure among a new generation of hard-liners in Iran. 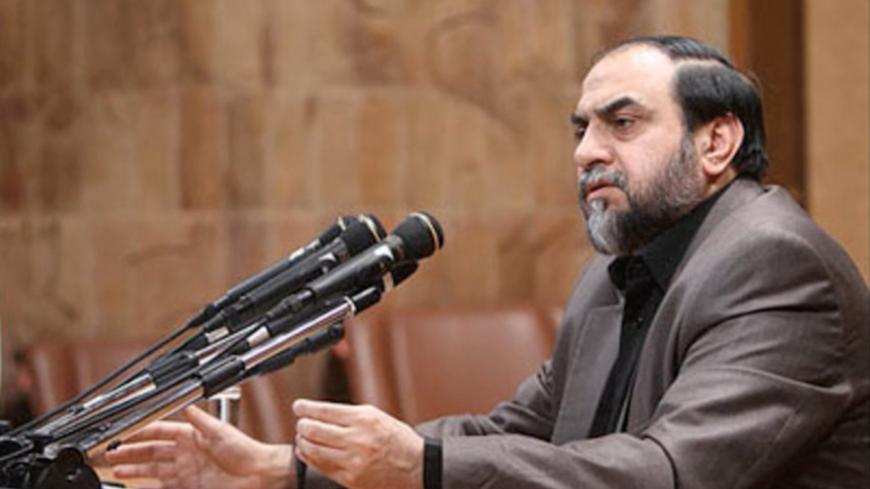 Hassan Rahimpour Azghadi delivers a lecture in a screenshot from a video uploaded Jan. 30, 2017. - YOUTUBE/Sokhanrani

Hassan Rahimpour Azghadi is rising to become an ever more popular figure among the new generation of hard-liners in Iran, following the footsteps of hard-line cleric Ayatollah Mohammad-Taghi Mesbah Yazdi. Both men are waging a war against the present atmosphere at the Qom seminary — the theological center of Iran — charging that it is not sufficiently revolutionary.

Azghadi is a graduate of the Qom Seminary, where he studied Dars-e Kharij, an academic level perhaps best described as equivalent to a doctorate. Yet many academic figures and clerics have questioned his religious knowledge given that he has not published any academic work. He has responded to this by saying, "I have a postdoc in book reading." Of further note, Azghadi neither wears a turban nor traditional clerical garb such as robes.

Azghadi was not known to the wider public in Iran until a decade ago. Several factors have changed that. The state broadcaster — which is controlled by hard-liners — has notably offered him a platform that has allowed him to become a public figure. Since 2003 he has been a member of the Supreme Council of Cultural Revolution, which is tasked with adopting macro policies on cultural and social matters. The council is chaired by the president but its members are chosen by the supreme leader. In 2007, Azghadi was appointed as a member of the Council of Representatives of the Supreme Leader in Universities, which led him to deliver more public speeches at various universities in order to find an audience among academics and students.

Born into an influential family in Iran in 1965, Azghadi has been striving to be recognized as a theoretician among hard-liners — and he appears to have been successful in that endeavor. He has also sought to portray himself as a new Ali Shariati, the prominent Iranian sociologist who had a unique view of Islam and Shiism, and at the same time as a new version of Morteza Motahari, a theoretician of the Islamic Republic who was killed in 1979, two years after Shariati died. What should not be neglected here is that Shariati and Motahari — who both had vast influence over the opponents of the Shah’s regime — were in disagreement over their approaches to Islam.

In one example of the above, Hossein Qadiyani, a young hard-line activist, said of an Azghadi talk in 2017, "I saw Motahari's intelligence, Shariati's passion ... and Jalal's identity in him." Jalal Al-e Ahmad was a popular anti-Western Iranian novelist and writer who popularized the term "West-toxification"; he died in 1969.

In 2012, Azghadi claimed that the "enemies" — a common reference to the United States and its allies among political and religious elites in Iran — had sought to target him three times. "I'm glad that the West’s intelligence agencies have been alarmed about me. A few nights ago, I was informed that a team wants to assassinate me for the third time. They have created an operations room in Iraqi Kurdistan. This operations room for assassinations works in cooperation with America, Britain and Israel’s intelligence agencies."

Azghadi is a staunch enemy of the Reformists, saying they have turned their backs on the 1979 Islamic Revolution. He once said that he had cursed Reformist former President Mohammad Khatami (1997-2005) for an entire "night until morning" for referring to US President Abraham Lincoln as "martyred" and complimenting the United States for its "culture and civilization." Azghadi has also repeatedly attacked moderate President Hassan Rouhani for his policies — including the signing of the Joint Comprehensive Plan of Action — and has called the president a liar.

At a contentious rally in Qom in August, Azghadi frontally censured the Qom theological schools and the grand ayatollahs in an unprecedented manner, charging that "the root of secularism is the seminary" and that nothing is taught about social relationships, politics and international relations. He further emphasized that "secular Islamic jurisprudence" does not focus on "theorizing religious civilization." Azghadi also said, "In jurisprudence on governance, the seminary has no answer yet. Forty years [after the 1979 Islamic Revolution], the seminary is still debating over whether the banks [in Iran] are operating [based on] usury or not."

In response, Grand Ayatollahs Naser Makarem Shirazi and Hossein Nouri Hamedi, who are both close to the establishment but at the same time belong to the traditionalist spectrum of the seminary, condemned Azghadi's remarks. Also, a large number of moderate clerics reacted negatively to Azghadi's Qom speech. However, many conservatives and hard-liners fully supported Azghadi for his harsh remarks against the seminary.

While Azghadi is being compared by hard-liners to Shariati and Motahari, he is seemingly rather following the footsteps of Ayatollah Mesbah Yazdi on various issues. In 2017, Azghadi told Mesbah Yazdi at a meeting, "You have been a good professor for our generation." In response, Mesbah Yazdi praised Azghadi, saying, "You are a unique person."

Indeed, in practice, Azghadi's views are identical to those of Mesbah Yazdi. For instance, in a speech in 2017, while calling on the seminary to be revolutionary, Mesbah Yazdi said, "In the area of jurisprudence, the seminary shouldn’t only focus on [matters to do with] praying.”

Mesbah Yazdi and Azghadi believe that the seminary is not fully throwing its weight behind the political establishment, limiting its support to certain turning points. This is while traditionalist clerics have repeatedly urged the seminary's independence from the political establishment. In 2013, the hard-line current created a group named Establishment of Teachers of the Supreme and Dars-e Kharij Levels" to try to marginalize traditionalist clerics who want to steer clear of politics or at least believe in drawing a thin line between seminary and state. This same hard-line group held the controversial rally in August.

Despite the backlash, Azghadi has not stopped his harsh speeches against the seminary. As such, it appears that he will maintain his position as an influential and popular figure among the next generation of hard-liners in Iran.