The Reformist push for Rouhani's resignation

Iran's Reformists have proposed that President Hassan Rouhani step down, but, surprisingly, hard-liners have opposed the idea. 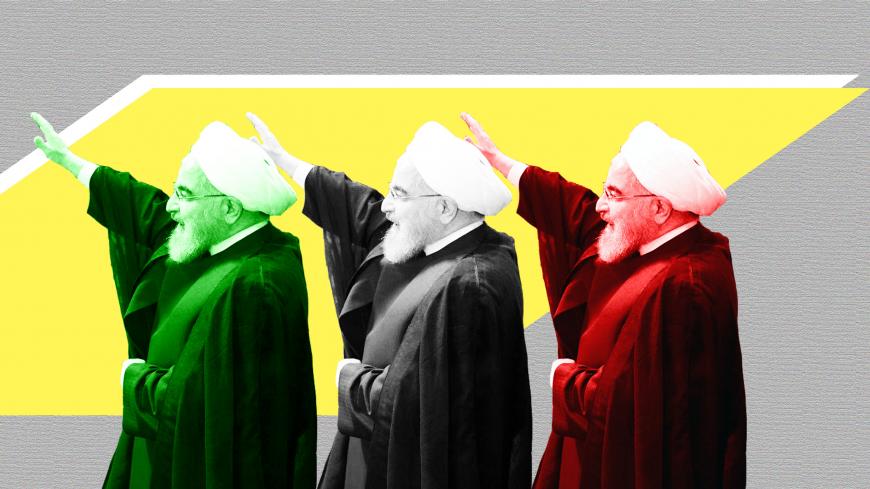 Iranian Reformists have called on President Hassan Rouhani to step down, while hard-liners, surprisingly, are urging him to remain in office.

Rouhani has faced unprecedented pressure in recent months, as new crises arise each day, including countrywide protests. It's possible Rouhani is unlucky, as several unforeseen events have taken place during his tenure, such as the 2017 election of Donald Trump — possibly the worst thing a moderate president of Iran could have imagined. Trump's election led to the death of the 2015 nuclear deal and the reimposition of US sanctions. However, Iran and the United States are seemingly doomed to have hostile ties. When Iran elects a moderate as president, the United States has a conservative as head of state, and vice versa.

Prominent Reformist theorist Saeed Hajjarian was the first to bring up the idea of Rouhani’s resignation. In May 2019, when Iran's economic crisis peaked due to US sanctions, Hajjarian stated that since parliament had effectively lost its power, Iran's economic problems could be solved by Rouhani's resignation and the subsequent holding of parliamentary and presidential elections, so the hard-liners and conservatives could win both.

Hajjarian’s suggestion is taking a swipe at the deep state, which, according to Mashregh News, Hajjarian uses to mean the Islamic Revolutionary Guard Corps and Supreme Leader Ayatollah Ali Khamenei. Hajjarian argued that the deep state doesn’t allow the Reformist-backed Rouhani to implement his policies, including negotiations with the West. As such, it is better not to waste time and to let the groups representing the deep state take over in order to see harmony in the country.

A few days after the November 2019 protests in Iran, which caught many analysts off-guard, as the protests stemmed from the anger of poor segments of society, Abbas Abdi, an eminent Reformist analyst, suggested again that Rouhani resign.

​Mentioning the hard-liners’ constant attacks on Rouhani and their belief that he is the source of the dire state of the economy, Abdi explained Dec. 8: “After the recent protests, it is unlikely that the [Rouhani] administration would be able to take its [simple] decisions, let alone make big decisions.” He called for holding an early presidential election. “A choice must be made," he wrote. "What is definite is that the continuation of the current [condition] is the worst [possible approach].”

He reiterated Hajjarian's argument, stating, “For [resolving] the current problems in economy, foreign policy and domestic politics, we need managerial and political unity.” Abdi is indicating that since the hard-liners and the deep state have placed obstacles before Rouhani, it is better that a new president and parliament aligned with hard-liners replace the existing ones.

The idea, which hard-liners would normally welcome, surprisingly irritated them. Kayhan newspaper, the mouthpiece of hard-liners, called it the “enemies’ plan.”

“On one hand, they suggest Rouhani resign, and on the other hand they claim that [Rouhani’s administration] opponents want his tenure to end with no achievement," Kayhan reported Dec. 15, 2019. The Reformists "seek to lay the blame for [Rouhani’s] failure at [conservatives’] door and perhaps are preparing the public for future negotiations."

"The Reformists are well aware of Rouhani’s popularity sinking and consider themselves the losers of the [2020] parliamentary election," Kayhan continued. "They presumably want to … put the fault of their loss on the [Islamic Republic] establishment.”

Despite the hard-liners’ argument against Rouhani leaving power, they have called for his resignation over the past few years. Even in December 2019, Alireza Panahian, a hard-line cleric, called for the formation of a “powerful” and “independent” parliament to impeach Rouhani. “Then we don’t have to see the suffering of the people and other Saudi-American crises in the country for two more years,” tweeted Panahian.

In the face of hard-liners’ unexpected opposition to the idea of Rouhani stepping down, Abbas Abdi said: “If the serious opponents of the government don’t accept this solution, [therefore] it is better for them to avoid making trouble [for Rouhani]. This administration seeks to revive the economy through resolving the foreign [affairs’ issues]. … If you dislike and still oppose it, then why do you oppose the idea of resignation?”

He then emphasized: “If you find resignation inappropriate, then please allow [Rouhani] to do his job.” It seems Abdi is referencing the opposition to Rouhani's previous attempts at more negotiations and restoring ties with the United States, including during President Barak Obama’s tenure.

As the result of various crises over the past month, some people on social networks are asking for Rouhani’s resignation. Nevertheless, even if Rouhani decides to stand down, Supreme Leader Khamenei will definitely oppose it, as it could lead to more chaos in the country. In this vein, Abbasi Salimi Namin, an influential conservative analyst, stated in 2018: “The supreme leader won't allow [the resignation to happen]. He has never let the administrations to [step down] halfway through.”

In a separate statement in December 2018, Salimi Namin argued that Rouhani’s resignation would create chaos. "That’s why the leader entered the field [for the issue of a hike in gasoline price, which led to protests] to prevent the possible [repercussions of the pressure on Rouhani].” Iran's leader recently supported Rouhani’s policy to raise gasoline prices while he was under pressure from hard-liners, who were bent on ousting him, and the public.