How Iran's hard-liners tried to ride wave of protests

Iran's hard-liners say they had nothing to do with the fuel price hike that has prompted Iranian protests. 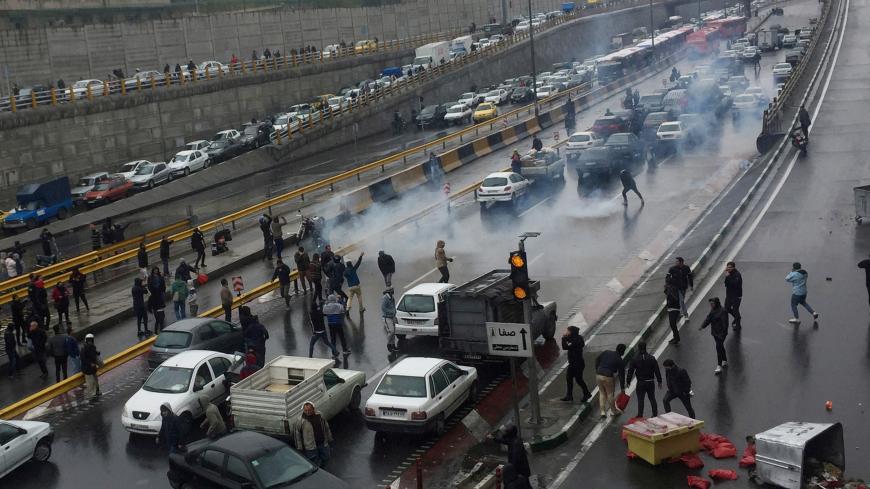 Feeling the heat, Iranian hard-liners are distancing themselves from the government's fuel price hike.

The government announced Nov. 15 an important decision affecting daily life in Iran: the rationing of gasoline and a subsequent increase in gas prices. Iranians have bitter memories of fuel price hikes. They consider it tantamount to a deterioration in their quality of life. Increases in gas prices have always led to increases in the costs of food and other necessities.

The government announced the price hike at midnight on Friday, while most people were asleep. The announcement caught people off guard. The public wasn’t prepared to face it, and it caused outrage and anger. The timing of the announcement — possibly designed to alleviate the exasperation and to prevent protests — ultimately was not effective.

Meanwhile, the hard-liners launched an onslaught against the government, portraying President Hassan Rouhani as the man behind the people's misery, further provoking public ire in order to possibly take down the incumbent president. State TV, controlled by hard-liners, also added fuel to the fire, urging people to turn away from Rouhani.

As the protests gain momentum, the institutions and organizations under hard-liner control distanced themselves from the fuel price hike. In a Nov. 16 statement, the influential Expediency Council addressed the people, saying that the council's “secretary” and “chairman” have never spoken in favor of raising gas prices. Yet the decision to raise fuel prices was made by the Supreme Council of Economic Coordination, formed upon the order of Supreme Leader Ayatollah Ali Khamenei. The heads of the council — judiciary chief Ebrahim Raisi, parliamentary speaker Ali Larijani and Rouhani, among others — all favored the hike. Despite knowing this, the hard-liners sought to evoke disillusionment among the public on Rouhani and Reformists ahead of the 2020 parliamentary elections. The same council had also tasked state TV to persuade people on the "logic" behind the hike.

Khamenei's throwing his weight behind the council's decision didn't end the attacks on Rouhani. Yousef Tabatabai Nejad, the hard-line Friday prayer leader in Esfahan, addressed the government Nov. 22, saying, “Why do you say the gasoline price hike won't lead to a rise in other things’ prices?” Hard-line cleric Alireza Panahian also lashed out at Rouhani and Reformists, stating Nov. 22, “It is not clear who decided to raise the gasoline price.” However, the protests grew bigger than the hard-liners had predicted, reaching at least 100 locations in the country,  which was unprecedented in the past 40 years.

​The recent protests are different than the protests of 2009, when people took to the streets after Reformist presidential candidates Mir Hossein Mousavi and Mehdi Karroubi declared that the ballots were rigged. Those protests had leaders and political goals. The protesters’ demands went beyond holding an election redo — they targeted the political system itself. The 2019 events have no leader or specific goal. Nonetheless, the slogans were much harsher in 2009 than today.

The 2019 protests are an expression of deep-rooted anger and pain. The most important factor behind the protests is the dire economic situation,  leading people not being able to make their ends meet, that followed the US withdrawal from the 2015 nuclear deal and the government’s mismanagement of the economy. The US embargo on Iranian oil sales — the government's main source of revenue — is what prompted Rouhani to raise gas prices to compensate for the budget deficit. Before the United States reimposed sanctions, Iran's economy had actually started to recover.

Apart from US sanctions, Iranians' rage has intensified as they witnessed more corruption scandals and increasing inequality. Adding to the pain and rage was the hard-liners’ campaign to disclose and magnify — to some extent — Reformists' and moderates' corruption. The hard-liners didn’t realize that the public's distrust of Reformists and moderates didn't equate to a hard-liner victory. Many Iranians totally disagree with hard-liners on several issues, including restrictions on social and political freedoms, and would never join them.

The hard-liners’ campaign against Reformists has had an alarming impact, as seen in recent protests. The protesters believe that neither hard-liners nor Reformists can represent them. Their distrust in both camps has grown. That’s why today's protesters have no leader, while in 2009 they pinned their hopes on Reformists like Mousavi and the late Ayatollah Akbar Hashemi Rafsanjani, who  both acted as the opposition leaders. If the political establishment does not address the public's anger and demands, such protests will likely be triggered in the future over issues as basic as an increase in the price of eggs.

Sensing the trouble, the hard-liners are striving to find new faces for their camp to gain votes and popularity. Hard-line cleric Panahian stated Nov. 22, “No, we aren’t [part of the] Principlists," which is the name of the hard-line current in Iran. "We only think about the results. … Don't let people [affiliate us] with Principlism.” A statement from prominent hard-line figure Gholam-Ali Haddad Adel clearly demonstrates how hard-liners are striving to ride the public wave of anger. He said Nov. 23 that hard-liners are concentrating on how to solve people's economic troubles, emphasizing that prominent "economists" will be on their forthcoming electoral tickets.

Nonetheless, the hard-liners' attempts are in vain. Putting on new clothes, choosing new candidates and even distancing themselves from Iran's dire economic situation won't prompt Iranians — who have lost all hope in Reformists — to think of hard-liners as their new saviors.