Comments by the son of prominent Reformist leader Mohammad Reza Aref concerning his "good genes" have caused furor among Iranians. 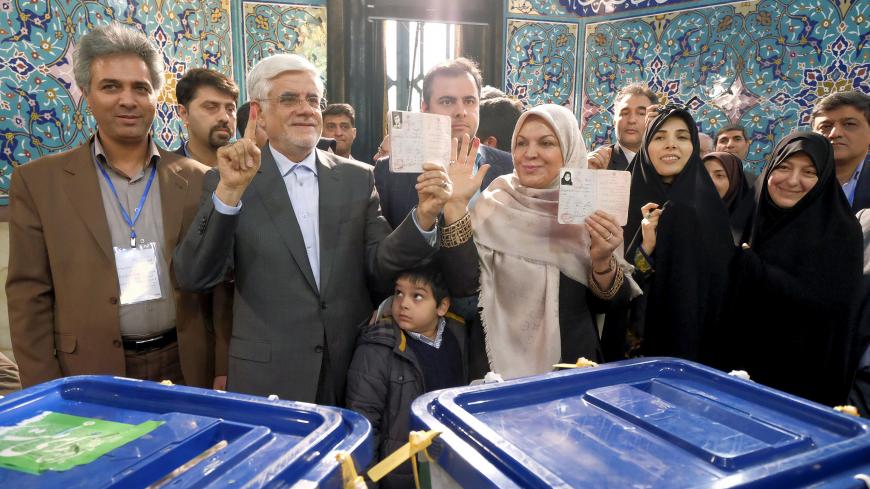 Iranian former vice president and candidate for parliamentary election Mohammad Reza Aref and his wife show their ink-stained fingers after casting their ballots during elections for the parliament and Assembly of Experts, Tehran, Iran, Feb. 26, 2016. - REUTERS/Raheb Homavandi

TEHRAN, Iran — An interview with the son of prominent Reformist leader Mohammad Reza Aref, a member of the parliamentary Hope faction, has led to a new controversy in Iran.

The July 20 interview features Hamid Reza Aref talking about how the children of Iranian elites, locally known as "aghazadeh" (noble-born), have "good genes." The interview has not only introduced a new terminology on nepotism to Iran's political lexicon but also brought social media attention to the positions held by these "aghazadehs."

In the interview, the younger Aref said, "The discussions over being an 'aghazadeh' are a way of escaping reality because we are used to blaming someone for our problems. Now they [people] want to lay the blame on the 'aghazadehs.' Naturally, when my mother and father are successful individuals, that [same] gene and blood will also be transferred to me and so it's not that people haphazardly reach a position. Lineage is not a small thing to have someone come out and claim that they have lineage."

Social media users, and especially those on Twitter, immediately responded to Aref's interview with heavy criticism — especially regarding what was seen as his sense of superiority.

While public outcry grew on social media, the son of another well-known Reformist politician added even more fuel to the fire. Mostafa Mousavi Lari, the son of Abdolvahed Mousavi Lari, who was interior minister under former Reformist President Mohammad Khatami as well as a candidate on the Reformist ticket for the May 19 Tehran city council elections before withdrawing his candidacy, published a provocative post on his Instagram account on July 23.

"The Lion King's death is one of the most famous death scenes in the world," he wrote. "However, there was a point which I found very attractive about this. [It was where] the hyenas scare a number of buffaloes, all of which suddenly start running. Most of the buffaloes don't even know what is happening, meaning they don't know what they are running away from or what goal they are suddenly running toward. They just run with the crowd and in the midst of it all, kill their beloved king! The Twitter waves being launched these days strangely remind me of this scene." This text, which was posted along with a picture of the scene from the film, prompted even more criticism about the idea of politicians' children benefiting from good genes.

To the public, Mousavi Lari's post was broadly tied to Aref's remarks, even if he may not have intended that and only sought to lessen the wave of criticism through his post. However, the use of key words such as hyenas, lion and buffaloes — all of which Mousavi Lari highlighted with hashtags — amid the debate about good genes and good blood, was a reminder of the ancestral superiority that Aref seemingly perceived himself as enjoying.

The concept of benefiting from good genes became a topic for assessing the other ties of politicians' children, especially those within the Reformist camp.

Mousavi Lari's Instagram post was followed by so much controversy that he was forced to remove it only hours after posting it. The same day, he also took to Twitter and wrote, "Given the misunderstanding this Instagram post has caused among some friends, I [would like to] remove the post and apologize to [both] like-minded fellows and Reformists, and hope that they forgive me." Although this tweet put the debate to rest to some degree, the concept of benefiting from good genes became a topic for assessing the other ties of politicians' children, especially those within the Reformist camp, as well as the positions they had obtained as a result of being "aghazadehs."

One such example was Ahmad Araghchi, the nephew of Iran's senior nuclear negotiator Abbas Araghchi. Upon the decree of the Central Bank of Iran's governor, Valiollah Seif, the younger Araghchi was appointed on Aug. 8 to the key position of central bank deputy governor for foreign exchange affairs. Not even 40, he got the job after reportedly only having some four years of work experience on his resume.

It should be noted that Ahmad is not Araghchi's only nephew to catch the public's attention. Another nephew, Ali Araghchi, apparently received firsthand news of the nuclear negotiations from his uncle during the high-level talks in Switzerland and Austria, and posted them on his personal Twitter page as exclusive news.

However, the subject of Reformist "aghazadehs" did not end there. Mohammad Ali Vakili, a Reformist member of parliament from Tehran, is another individual who has appeared in the spotlight during the recent debate over good genes. On Aug. 19, while parliament met to vote on President Hassan Rouhani's proposed ministers for the new Cabinet, news began to circulate about Vakili's 20-something son having been hired as the head of an industrial mining company that operated under the Ministry of Labor and Social Affairs. Media reports and social media posts claim the latter was why Vakili did not oppose Rouhani's proposed minister of labor and social affairs.

While widely prevalent, nepotism and the concept of good genes are not restricted to the Reformist camp. Amir Bahmani, the young son of Mahmoud Bahmani, central bank governor under former President Mahmoud Ahmadinejad, was elected as mayor of Hashtgerd, a city located 42 miles west of the capital Tehran, without having any relevant experience in the Hashtgerd city council. According to the runner-up, Bahmani's election was the result of extensive lobbying and intensive meetings he had with members of the Hashtgered city council. Soon afterward, Komail Lahooti, the son of parliament member Mehrdad Lahooti, who represents Langarud in the northern province of Gilan, was chosen as mayor of Chaf and Chamkhaleh, a city in the central district of Langarud county.

The appointment of children of politicians to various positions as a result of family connections is nothing new in Iran. However, the reason this sort of nepotism has attracted particular attention now is perhaps due to the expansion of social media networks and the rising influence of Twitter, Telegram and Instagram in Iran — or maybe even the odd remarks made by Aref's son regarding good genes — an issue which is perhaps seen more prominently among Reformist figures.