Why Iran's Reformists are disillusioned with one of their own

The political maneuvering of Reformist leader Mohammad Reza Aref has already cost him a bid for the presidency two years before the race begins. 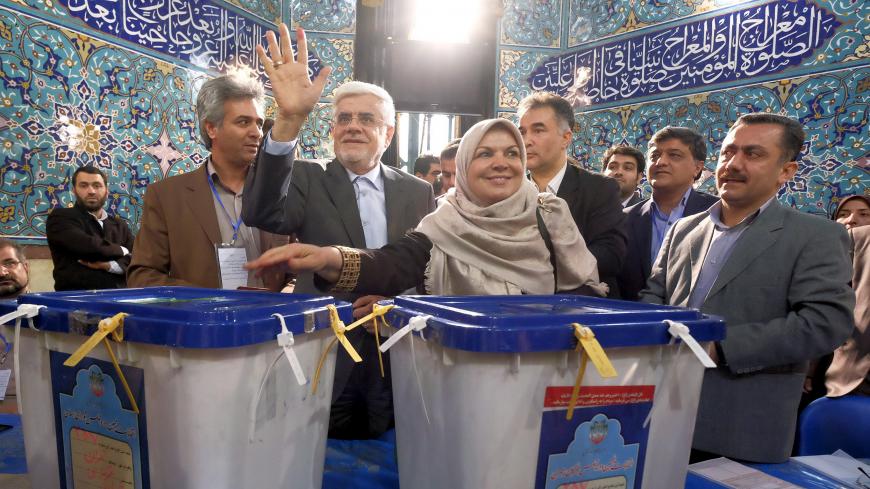 Iran's former vice president and parliamentary candidate Mohammad Reza Aref waves after casting his ballot with his wife during elections for the parliament and Assembly of Experts, in Tehran, Iran, Feb. 26, 2016. - REUTERS/Raheb Homavandi/TIMA

The political life of Reformist leader Mohammad Reza Aref is being brought to an end — not by hard-liners, but by Aref himself.

Aref, a Stanford graduate, nominated himself in the 2013 presidential election. He was not the official candidate of the Reformist camp, having made the decision on his own. He declared that he would withdraw if Ayatollah Akbar Hashemi Rafsanjani stepped forward. Moderate Hassan Rouhani, a protege of Rafsanjani, was also ready to drop out of the race in deference to the senior statesman.

Everyone was surprised to see the old ayatollah to try his luck once again. At the time he was 79 and had been president twice. The Guardian Council, the hard-line clerical body tasked with vetting the candidates, officially rejected Rafsanjani due to his age, though the reason was more likely President Mahmoud Ahmadinejad’s intelligence minister having reportedly lobbied against him, leaving Aref and Rouhani in the game. As the presidential debates kicked off, Rouhani, who was at that time unknown to the public, won popularity for his harsh and outspoken remarks against the hard-liners.

Former President Mohammad Khatami, considered the spiritual leader of the Reformist camp, urged Aref to withdraw in favor of Rouhani. Aref resisted before finally agreeing, but didn’t declare his support for Rouhani.

Aref’s withdrawal and Rouhani’s subsequent victory led to a tacit coalition between the Reformists and the newly emerged moderate faction that had left the conservative camp over its hard-line views. The 2016 parliamentary election arrived and the coalition became a formal alliance as the Reformist and moderate candidates ran on a single ticket. The strategy worked, giving the Reformists a sweeping victory in most of big cities, including the capital, Tehran. Aref, whose reluctant withdrawal from the 2013 race had earned him honor among the public as many had described his move as a sacrifice, was made the leader of the Reformist faction in parliament, known as Ovid or "Hope."

That “Hope” has become frustration in the eyes of the public as the Reformists haven't been able to live up to the people's expectations or fulfill many of their promises. Aref himself has not appeared to hold firm against parliamentary hard-liners and have mostly followed an approach called the strategy of silence, which has been mocked by his critics inside the camp.

Describing Aref as “inept,” outspoken Reformist activist Sadegh Zibaklam asked what Aref has done to earn his place as a Reformist leader, saying June 11, “A person can't call himself a leader while he doesn't do anything.”

During his time in parliament, Aref has run for the speakership three times, but failed each time. However, he has gained acceptance among hard-liners, who threw their weight behind him in his second race against moderate Ali Larijani over the speakership in 2018. Notably, Larijani is hated by hard-liners for his support for Rouhani and the nuclear deal in recent years, and hard-liners seem to find Aref more flexible.

Hard-line analyst Abbas Salimi Namin argued in 2018 that Aref is more conservative than most of Iran's conservatives and hard-liners.

The hard-liners’ support for Aref has been explained by a number of Reformists. “Reformists haven't seen anything from Mr. Aref so far. There has been so much investment in him, but he hasn’t said five words in favor of Reformism,” said former Reformist parliamentarian Nasar Qavami in 2016.

In May 2019, in spite of warnings against the consequences of his nomination, Aref ran for the speakership and once again lost the race to Larijani. The coalition between Reformists and moderates was torn apart, unseating prominent Reformist Ali Motahari from the deputy speakership as well as forcing Larijani to make concessions to hard-liners in return for their votes.

Meanwhile, Aref’s vocal discontent with the decision of the Reformist-dominated city council of Tehran to name a street after the famous classical singer Mohammad Reza Shajarian (a critic of Iran's political system) and his opposition to a number of parliamentarians' protesting of the trial of Reformist figure Mohammad-Reza Khatami over his remarks about the disputed 2009 election have heightened the criticism against him. In Iran, siding with hard-liners is seen as a cynical move to maintain power in both elected and non-elected state institutions.

Aref’s strategy has not only cost him his bid for the presidential election two years before the race begins in 2021, but also put his political life in danger as his popularity has dropped both among the public and the members of the Reformist camp. Leading Reformist Abbas Abdi stated in 2018 that Aref has never been a candidate of the Reformists and “will unlikely to be in future.”

The 2020 parliamentary election is the soonest that Aref can test his popularity among the people. If he fails or even finds his way into parliament with a minimum vote count, he will have to bid farewell to the 2021 presidential election and playing a major role in his own camp.

However, Aref’s performance may have earned him a role in influential state institutions for years to come.