With Iran's next parliament close to being sworn in, Reformist frontrunner Mohammad Reza Aref is likely to challenge Ali Larijani for the position of speaker. 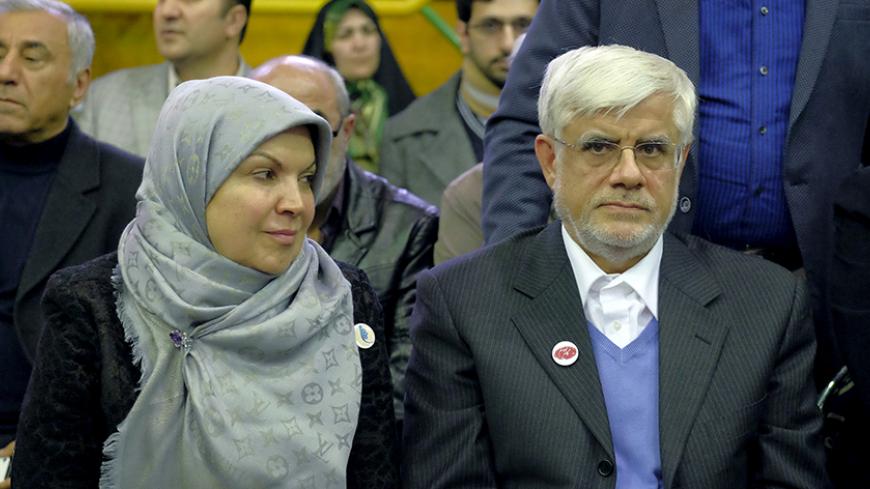 TEHRAN, Iran — “After our victory in the parliamentary elections, Mr. [Ali] Larijani contacted me to congratulate us. But we never held any conversation regarding the post of parliament speaker. I reject [talk of] agreeing or negotiating with Mr. Larijani on this issue.”

These are the words of Mohammad Reza Aref, the head of the Reformist ticket for the Tehran constituency in Iran’s parliamentary elections held in February. Having secured the highest number of personal votes, Aref was elected to Iran’s next parliament with more than 1.6 million ballots cast in his favor. Those on the “List of Hope,” which included names from the Reformist camp as well as supporters of the moderate government, secured a resounding victory in Tehran, winning all of the voting district’s 30 seats. In total, the Reformist-moderate coalition won 86 out of parliament’s 290 seats. Its main rivals, the Principlist coalition, was badly defeated in Tehran, where it failed to elect even a single representative. However, the Principlists' performance was much better in smaller cities, ultimately leaving the coalition with 67 seats. Of the remaining seats in Iran’s next parliament, 55 went to independent candidates and 11 to the moderate conservative “Voice of the Nation.” Meanwhile, the contest for 71 remaining seats went into a second round.

Because no party or political movement was able to win an outright majority, it is very difficult to predict the next speaker. However, there is little doubt that the competition for this important position will be between none other than Aref and the incumbent, Larijani.

Larijani has been speaker for the past eight years, after defeating his predecessor, veteran politician Gholam Ali Haddad-Adel. Haddad-Adel, who also ran in the Feb. 26 parliamentary elections as head of the Principlist list in Tehran, came in 31st in the capital, leaving him unable to enter the next parliament. Larijani, who made his way into parliament for a third time through the city of Qom, has great chances of extending his position as speaker. For one reason, some of those on the List of Hope are veteran politicians who are loyal to Larijani and will thus naturally choose their old friend if it comes down to a contest between him and Aref. At the same time, the Principlists, who are unable to propose their own candidate for speaker, all prefer Larijani — who has Principlist roots — despite their many differences with him in recent years, including over how parliament is run, the ratifications of the Joint Comprehensive Plan of Action and Larijani’s interaction with the government on economic issues. It should be noted that President Hassan Rouhani has during his almost three years in office shown that his administration gets along well with Larijani. This factor alone could prompt the government to prefer Larijani to continue as speaker.

Larijani’s potential rival for the speakership is none other than the former vice president under President Mohammad Khatami — a man who not long ago dreamed of becoming president himself. Aref, who ran in the 2013 presidential race, withdrew his candidacy at the last minute in favor of incumbent Rouhani. At the time, a Reformist workgroup composed of the movement’s elders, with Khatami as its spiritual nexus, had formed to promote a single candidate. Aref had hoped to be the movement’s choice due to his strong Reformist credentials, but opinion polls put Rouhani in the lead.

A member of the Reformists’ advisory council told Al-Monitor on condition of anonymity, “After numerous sessions, we decided to introduce Rouhani as the final candidate. The plan had been that if Rouhani was chosen as the ultimate candidate, Khatami would convince Aref to step aside, and if Aref was chosen, [former President Ali Akbar] Hashemi Rafsanjani would convince Rouhani to withdraw in favor of Aref. Aref, however, did not accept the council’s decision and told Khatami that the only way he would withdraw was if the former president asked him to do so in writing. Khatami, who did not expect Aref to disobey his verbal request, did so with some disappointment, and in the end, Aref stepped aside.”

Aref’s dissatisfaction with his sidelining was so intense that he was not even willing to include Rouhani’s name in his withdrawal statement and did not announce in whose favor he was stepping aside. He did, however, emphasize that in response to a letter from Khatami, he had agreed to withdraw his candidacy. Hence, perhaps Aref now perceives the speaker position as rightfully his. Yet one of the key obstacles to his potential ambition is that not all Reformists are in consensus about Aref. Prior to the parliamentary elections, Mohammad Reza Atrianfar, a member of the central council of the Executives of Construction party, said that the Reformists had many like Aref who could head their list. However, the Guardian Council’s mass disqualification of Reformist candidates had left Aref as their lead candidate.

Furthermore, Aref’s problems are not limited to the composition of the next parliament. A closer look at his behavior, especially during the televised debates among presidential candidates in 2013, shows that he is not a very calm person. Thus, he would perhaps not be a very suitable candidate for speaker of a parliament that is divided almost equally between two groups strongly opposed to each other. Managing such an environment would require a certain type of leadership.

Gholamhossein Karbaschi, secretary-general of the Executives of Construction Party, has said, “It makes no difference for the [Rouhani] administration whether Aref or Larijani becomes speaker.”

But will Aref, who agreed to make a sacrifice in the 2013 presidential elections, be willing to once again step aside and leave the floor open for Larijani? Saeed Leylaz, a prominent Iranian journalist and economist, told Al-Monitor, “Whenever Mr. Aref has been put in a difficult position, he has made the right choice — and he shows no signs of having an individualistic mindset. Surely, if the coalition of Reformists and supporters of the government decide that Larijani is the better choice for speaker, Mr. Aref will not act independently.” Notably, however, Leylaz did not confirm that the Reformist-moderate choice for speaker would be Larijani.

Despite all this concern, it seems unlikely that Aref will step aside without fuss. As the winners of the second round of polling for the remaining parliamentary seats appear — perhaps many of them Reformists — Aref will probably compete with Larijani for the position of speaker. Such a contest will not only bring him no benefit, but also allow conservative radicals to grow closer to Larijani.