Why Reformists have no choice but to back Rouhani

Despite the discontent among his key Reformist backers, Iranian President Hassan Rouhani seems set for another term — if only because of a lack of options. 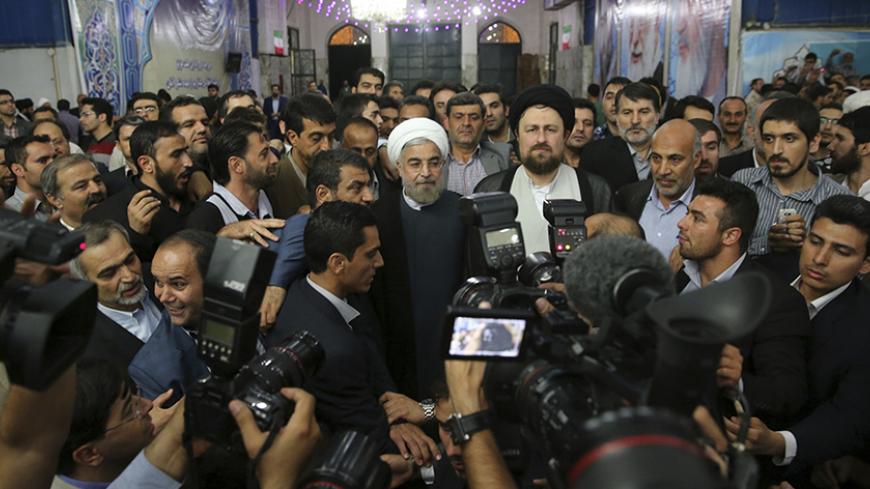 TEHRAN, Iran — Conditions seem to be moving toward the smooth re-election of Iran’s President Hassan Rouhani after one of his main rivals, former President Mahmoud Ahmadinejad, announced that he will not be running in the May 2017 vote. But will the Reformists, who were Rouhani’s key supporters and the reason for his victory in the 2013 election, continue backing him? It appears as if the situation has not turned out the way the Reformists envisaged and that there is some dissatisfaction with Rouhani’s performance within their camp.

Reformist politician and member of parliament Mohammad Reza Aref, who quit the 2013 presidential race at the last minute to allow for a Reformist consensus around Rouhani, is one of the people who does not have a favorable view of the president. Aref, the head of the Reformist-moderate “List of Hope” for the Feb. 26 parliamentary elections, has continuously refrained from voicing his outright support for Rouhani in the upcoming presidential vote.

In an Aug. 13 interview with the Young Journalists Club, Aref — who served as first vice president during former Reformist President Mohammad Khatami’s second term (2001-2005) — was asked to comment on whether Rouhani is the Reformists only potential candidate in the May 2017 vote. He responded, “Whatever comment I make in this regard will be viewed as personal since the final decision on the Reformists’ presence at the polls has not been made yet. The cohesion of the Reformist camp is paramount to us. Therefore, we will discuss this after the [Reformists’] type of presence [in the next presidential election] has been decided on.”

Aref’s comments may stem from his personal discontent with Rouhani for not appointing him as his first vice president after being elected president, and later for not supporting his bid to become parliament speaker. Although Rouhani never made a direct or official statement about Aref’s decision to run for speaker, the president’s advisers and deputies supported Aref’s main rival, incumbent Principlist Ali Larijani.

One informed source close to former President Khatami who asked to remain anonymous shared with Al-Monitor an interesting anecdote about the government’s role in the vote for the speakership. He told Al-Monitor, “Before the inauguration of the new parliament, [Oil Minister] Bijan Zangeneh and [Minister of Roads and Urban Development] Abbas Akhoundi visited Khatami to discuss Aref’s candidacy and request that he convince Aref to not compete in the race so that Larijani could remain in the post of speaker. This request by Zanganeh and Akhoundi — who had both served as ministers in Khatami’s administration — greatly angered Khatami who responded, 'If in 2013 we convinced Aref to quit the race, it was because Hassan Rouhani was on the other side and we could form a coalition around him. But what reason would we have for requesting this of Aref today? To withdraw in favor of Ali Larijani, who has no ties to the Reformists? What will the people who counted on us and voted for our List of Hope say?'”

The source added that Zangeneh and Akhoundi then tried to convince Khatami that Aref would not get enough votes and that it would be best if he ran for deputy speaker instead. Khatami, however, opposed their request and apparently said, “We do not expect the government to support Aref, but expect it to at least refrain from entering the scene and allow us to do our own work.” The meeting is said to have ended with Zangeneh and Akhoundi promising to convince Rouhani to do so.

This did not happen given that Rouhani’s first Vice President Eshaq Jahangiri two days later, on May 7, expressed his full support for Larijani at a gathering that was held to acquaint new parliamentarians with Iran’s parliament and the legislative process. At the meeting, Jahangiri praised Larijani and said, “The parliament speaker very bravely and thoughtfully stood up and even made a sacrifice to show his support for the Joint Comprehensive Plan of Action.” Jahangiri made no mention of Aref at the session.

Larijani’s decisive victory in the battle for the speakership is said to have once again disheartened Aref — so much so that until today he has abstained from voicing support for Rouhani’s re-election. One lawmaker from Tehran who was among the nominees on the Reformists’ List of Hope told Al-Monitor, “Mr. Aref feels that he has been deprived of his rights in an ungentlemanly manner and is very depressed and does not have much desire to voice his opinion or have an active role.”

It could be that the Reformists have realized that they have no other candidate than Rouhani and their lack of support could thus be aimed at pressuring the president into giving them a larger role in the next government.

In an interview with the Iranian Labor News Agency July 22, Mohammad Reza Khatami, the deputy speaker of Iran’s sixth parliament (2000-2004), introduced Rouhani as the Reformists’ first and last option for the May 2017 presidential vote. Meanwhile, prominent Reformist theoretician Saeed Hajjarian, a Reformist theoretician, told Basij News Aug. 28, “The Reformists have no choice but to support Rouhani. Even the Principlists will slowly come toward Rouhani and have no choice but to support him, because they, too, have no one to present for next year’s election.”

Saeed Laylaz, the deputy head of council of the Executives of Construction Party, shares Hajjarian and Khatami’s views. In an interview with Al-Monitor, Laylaz said, “If Ahmadinejad had come [forward as a candidate], there would be more unity and consensus among the Reformists. However, when next year’s election comes, you will still witness the Reformists forming a consensus around Rouhani without any difficulty.”

He added, “I don’t understand the great concern regarding Mr. Aref’s potential actions. He has always respected the Reformists’ collective and strategic decisions and never taken a step autonomously or against the public good of the Reformists. Therefore, I am certain that he, too, as one of the greats in the Reformist movement, will act wisely as he has done before and support Rouhani.”

As such, given the current situation, Hajjarian’s analysis seems to be the most logical: The Reformists have no other option than Rouhani and they have no other choice either.