Are Reformists, Rouhani heading for split?

After supporting Hassan Rouhani in the presidential elections, Reformists expect Rouhani to repay them with support in the parliamentary elections, but that may not be the case. 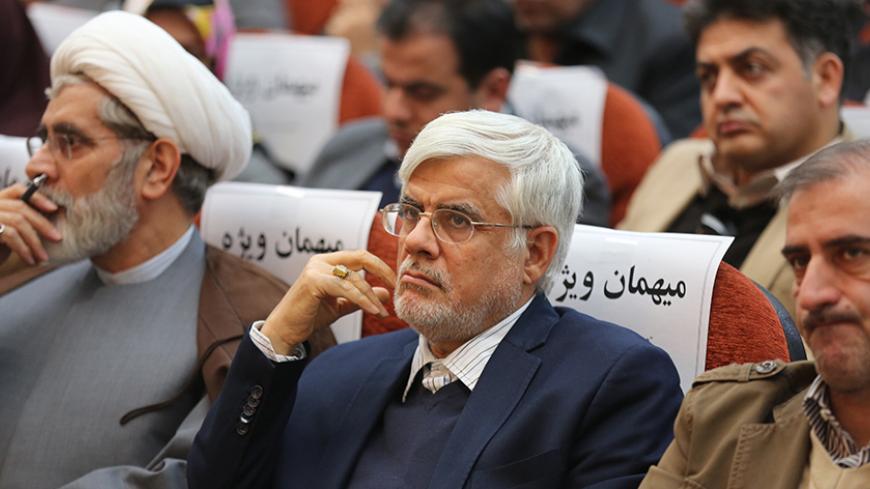 “Without the Reformists’ support, Mr. Rouhani would have gotten less than 2 million votes,” said Sadegh Zibakalam, professor of political science at the University of Tehran, speaking on May 5 about the June 2013 presidential elections.

Zibakalam played an active role in Hassan Rouhani’s presidential campaign and was even featured in a television documentary encouraging people to vote for Rouhani. The push by Reformists during the last few days leading up to the elections resulted in Rouhani getting more than 50% of the votes in the first round. Perhaps the most important of these developments was when, after pressure from the Reformist former President Mohammad Khatami, Mohammad-Reza Aref (the Reformist candidate) withdrew from the race in favor of Rouhani.

This is while, in the Principlist camp, all the candidates — Saeed Jalili, Mohammad Bagher Ghalibaf, Ali Akbar Velayati and Mohsen Rezaee — stayed in the race until the very end. This lack of cooperation between the Principlist candidates was perhaps one of the main reasons behind Rouhani’s success. During the last few days before the 2013 presidential elections, the now deceased chairman of the Assembly of Experts, Ayatollah Mohammad Reza Mahdavi Kani, who was also considered to be the spiritual father of the Principlists, wrote a private letter, which has recently been made available to the press, to Velayati, warning him about the possibility of the Reformists winning the elections and asking him to withdraw from the race in favor of another Principlist candidate.

After coming to office, Rouhani, who advocated “moderation,” has chosen the members of his Cabinet from both the Reformist and Principlist camps. Now, with the parliamentary elections approaching in February 2016, he is faced with the problem of having to choose which side he will lean closer to.

On one hand, the Reformists expect Rouhani to advocate for a list of candidates to include people from the Reformist front, considering how they supported him during the presidential elections. This is while the radical Principlists have been claiming for the past two years that Rouhani’s administration is controlled by the Reformists and have very carefully monitored the actions of the administration. They have also applied pressure through the parliament against what they deemed to be Reformist policies.

Although Vice President of the Political Committee of the Executives of Construction Party (Hezb-e Kaargozaaraan-e Saazandegi) Mohammad Ghouchani believes that the Reformists are Rouhani’s first choice, the president is currently at a crossroads.

One option is to form a coalition with the Reformists and thus repay them for their support. The other option is to choose the list of candidates the same way he chose his Cabinet members. The Principlists have so far been silent about this issue, and with the exception of the faction that has close ties to Mahmoud Ahmadinejad, the other Principlist factions have stayed silent and have not actively mentioned their plans for the upcoming elections.

Aref, who has refused to accept any position in the administration after he withdrew from the presidential race, is preparing himself for the parliamentary elections. This is while Ghouchani told Al-Monitor, “Right now, the goal is to convince Mr. [Ali Akbar] Nateq-Nuri, the speaker of the Fifth Parliament, to participate in the upcoming parliamentary elections. If he accepts, he will be on the top of the Reformists’ list and perhaps even [a] few of the Principlists’ lists. If not, however, then Mr. Aref would be on top of the list.”

Saeed Laylaz, deputy secretary-general of the Executives of Construction Party, which is one of the influential political parties of Iran, while dismissing the possibility of divergence among the Reformists, told Al-Monitor, “During the past few weeks there has been a lot of cooperation and reconciliation among the Reformists. In the coming months, Iranian society will hear the strong voice of the Reformists. More importantly, I believe that this diversity of opinions inside the Reformist camp shows that democracy is at work. There have always been talks about divergences among the Reformists while in reality, with the exception of the 2005 presidential elections, which was won by Ahmadinejad, Reformists have always come to a consensus in the final days before the elections. ”

The weekly magazine Seda also published a report in its June 6 issue regarding a meeting of the Reformist leaders, saying, “An important meeting has taken place among the leaders of the Reformist faction with the aim of enabling the Reformists to have a unified participation in the upcoming parliamentary elections. Prominent Reformist figures including Abdollah Noori [minister of interior in Khatami’s first administration], Mohammad-Reza Khatami [deputy speaker of the Sixth Parliament], Akbar Torkan [current presidential adviser and former minister of defense], Abdolvahed Mousavi Lari [minister of interior in Khatami’s second administration], Mostafa Moeen [Khatami’s minister of science and a candidate in the 2005 presidential elections] and Mohammad Reza Aref, among others."

Ghouchani said it’s possible there will be a collaboration between the Reformists and the Principlists in the upcoming elections. “For example, speaker of the parliament, Mr. [Ali] Larijani, likes to collaborate with the administration. For now, however, the administration has put the Reformists candidates on top of its list. Although it is doubtful that there could be a coalition between Mr. Larijani and the Reformists before the elections, they might form a coalition with Mr. Larijani in the parliament after the elections.”

In any case, as the parliamentary election approaches, there is more and more discussion about the possible lists of candidates. Laylaz believes that for the Reformists the list of candidates will be finalized with the pivotal presence of Akbar Hashemi Rafsanjani, Khatami and Rouhani.

by Murielle KASPRZAK and Joseph SCHMID | AFP | May 26, 2022
END_OF_DOCUMENT_TOKEN_TO_BE_REPLACED