Iranian President Hassan Rouhani has deemed the coming year "the year of elections," referring to the country's parliamentary and Assembly of Experts elections. 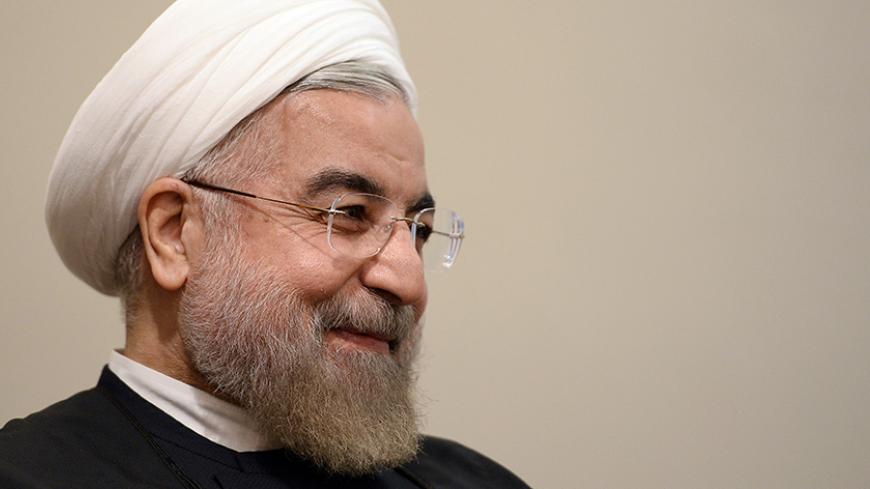 Iranian President Hassan Rouhani smiles during a meeting with UN Secretary-General Ban Ki-moon on the sidelines of the UN General Assembly in New York, Sept. 23, 2014. -

A few minutes after the arrival of Nowruz on March 20, President Hassan Rouhani released a video message congratulating Iranians on the Persian New Year, providing a general account of the country’s performance on domestic and foreign issues. These statements are typically vague, but Rouhani called the coming year “the year of elections.”

“Let’s join hands to elect a parliament that deserves the Iranian nation and also vote for an Assembly of Experts that could bring more stability to the country and further peace to public opinion,” he said.

Having been frustrated with the conservative-dominated parliament over cultural policies, Rouhani, whose popularity is on the rise now over the Lausanne nuclear framework announcement, will attempt to seize the moment by riding this popularity through to the February 2016 parliamentary elections.

Dariush Ghanbari, a former Reformist MP, told Al-Monitor: “Many of President Rouhani’s promises haven’t been fulfilled owing to hard-line MPs sabotaging his plans.” Ghanbari said that Rouhani needs a parliament in line with his policies to follow his strategies.

Explaining why Rouhani described the coming year as the year of elections, Ghanbari said: “Rouhani is worried about the persistence of the hard-liners’ role in the next parliament, which prevents a constructive interaction with the administration. Rouhani needs a parliament that not only doesn’t obstruct his way, but also helps the government to have a better performance and provides people with satisfactory service.”

Saeed Leilaz, a Reformist analyst and editor of Seda Weekly, told Al-Monitor: “The importance of parliamentary elections is to the extent that if Rouhani fails to form a parliament aligned with his administration, it puts in danger the possibility of a second term.”

The current parliament — chaired by Ali Larijani and composed of conservatives and hard-liners hampering Rouhani’s way — has been in conflict with the government on different issues. Conservatives have raised concerns over issues like Foreign Minister Mohammad Javad Zarif taking a walk with US Secretary of State John Kerry, and summoned the culture minister to answer for films approved by the previous administration. They impeached Rouhani’s science minister and have issued empty threats to impeach Rouhani, a process that has only taken place once, for Abolhassan Banisadr, the first president after the 1979 Islamic Revolution.

Nonetheless, attracting votes for pro-Rouhani candidates is dependent on many elements, the most important of which is a comprehensive nuclear deal by the June 30 deadline.

Sadegh Zibakalam, a political science professor at the University of Tehran, told Al-Monitor: “If Rouhani manages to lead the nuclear negotiations to a conclusion, which will strengthen the economy and bring hope among people, the chances of Reformists and figures with close views to the president to enter the parliament will increase.”

Leilaz believes that signing a nuclear deal will allow Rouhani to concentrate more on political, cultural and economic issues, which will attract many more votes in the parliamentary election.

Political analysts believe that the failure of a nuclear deal would be a blow to Rouhani, as his opponents would gain more support and hard-liners would have a better chance at entering the parliament.

Zibakalam said that a collapse of nuclear talks would be "a victory for hard-liners such as the Endurance Front. That is why with the pretext of being worried about the country they are expressing their anger about the possibility of the administration reaching a nuclear deal with the P5+1."

Encouraging voter turnout has proved a definite path for victory for Iran’s Reformists and moderates. Such a strategy helped Rouhani achieve victory in the 2013 presidential election. Many individuals played a special role in Rouhani's victory by bringing out "silent votes," such as Expediency Council head and, former President Hashemi Rafsanjani; former President Mohammad Khatami; and Hojat al-Islam Hassan Khomeini, the grandson of the founder of Islamic Republic.

“One of the most important elements of Rouhani’s victory in the coming parliamentary election is to encourage people to take part in the election, especially middle-class Iranians,” Leilaz said.

Besides the parliamentary election, Rouhani mentioned the upcoming Assembly of Experts' election, which will also take place in February. Members of this clerical body, which is chaired by conservative Ayatollah Mohammad Yazdi, are elected for eight-year terms.

The election will be a competition between Ayatollah Mohammad Yazdi; Ayatollah Ahmad Jannati, head of the Guardian Council; Ayatollah Mohammad Taghi Mesbah Yazdi, the spiritual leader of the Endurance Front; and Rafsanjani, who was recently defeated in elections for the chair of the Assembly of Experts following the careful planning of conservatives.

Abdol Reza Davari, former vice president of the Islamic Republic News Agency who is close to former President Mahmoud Ahmadinejad, is of the opinion that Rafsanjani will have no position in the Islamic Republic system, except the “unimportant” post of Expediency Council chairmanship, because of his stances during the disputed 2009 presidential election. “I contend that it is highly likely that Ayatollah Rafsanjani would be disqualified for the Assembly of Experts election,” he said. During the 2013 presidential election, the Guardian Council disqualified Rafsanjani from running because of “aging.”