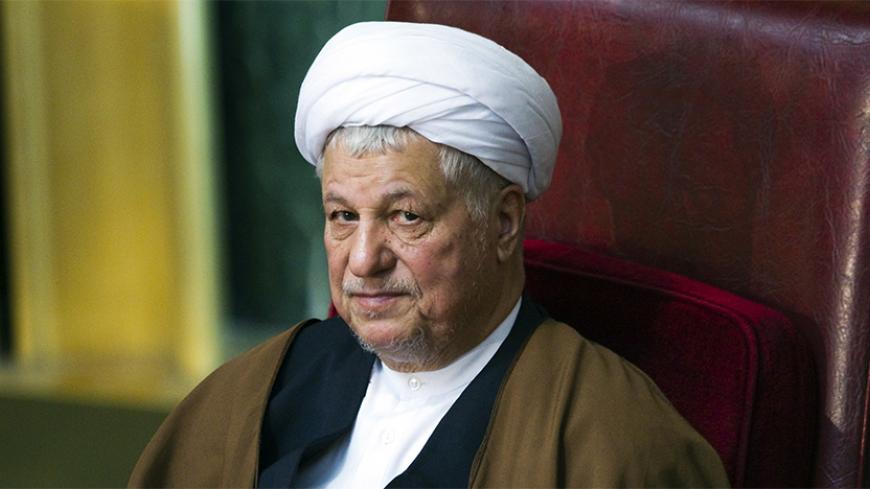 The loss in the March 10 Assembly of Experts elections of Ayatollah Hashemi Rafsanjani to former judiciary head Ayatollah Mohammad Yazdi to chair the body that is tasked with electing and supervising Iran's supreme leader was a surprise to many Iran watchers. Though Yazdi’s tenure only lasts 10 months until the next assembly general elections, before the elections many had believed that Ayatollah Mahmoud Shahroudi, who took over as interim chairman when Ayatollah Mahdavi Kani fell ill, would not only run but be elected by the sitting members of the Assembly of Experts.

Despite the euphoria in hard-line media over another Rafsanjani defeat, supporters of the onetime chairman of the assembly and the current head of the Expediency Council appear to feel that despite the loss, Rafsanjani is still an influential political figure. They point to a reported meeting between Rafsanjani and Supreme Leader Ayatollah Ali Khamenei recently that they believe indicates he will continue to be one of the pillars of the Islamic Republic.

The most surprising quote came from close Rafsanjani supporter Sadegh Zibakalam. He wrote in Shargh Daily that conservative media have delighted more in Rafsanjani’s loss than in Yazdi’s victory. Zibakalam wrote that despite the turmoil of the first decade of the revolution, Rafsanjani in the subsequent decades has become “more and more moderate” to the point that he views domestic extremists, not foreign enemies, as the biggest long-term threat to the Islamic Republic.

He wrote that the reason Rafsanjani registered his name to run for the 2013 presidential elections was because of this threat of extremism — and that even when Rafsanjani heard the news that the hard-line Guardian Council would disqualify him, he refused to withdraw. Zibakalam continued that Rafsanjani had repeatedly said if he feels that certain individuals he did not see fit would run, he too would decide to run.

According to Zibakalam, after the announcement of the election results, Rafsanjani said, “I couldn’t stay quiet. I put my age of 80 years and my political reputation on the line, and acted on the final responsibility and duty to the revolution and the system.” Rafsanjani’s website has not mentioned the quote but a number of conservative media, quoting Zibakalam, picked up the quote.

Even if Rafsanjani decides to no longer seek political positions, he would still continue to have a determining role in elections. The morning of the election, Motahareh Shafii wrote in Arman Daily that at times Rafsanjani has been attacked both by hard-liners and Reformists but he had endured through their attacks and that “no one can deny that Rafsanjani’s direct support for [Hassan] Rouhani” resulted in his victory in the 2013 presidential elections.

Shafii wrote that, according to sources, Rafsanjani met with Ayatollah Khamenei a few days before to talk about the nuclear negotiations. Shafii wrote that this meeting was significant because it put to rest rumors that Khamenei and Rafsanjani no longer meet and shows that nothing can break their close relationship. Some believe that Rafsanjani’s continued support for the Reformist candidate in the 2009 election, despite mass street protests, caused him to have a falling out with Khamenei, which subsequently sidelined him from the assembly chairmanship in 2011 and also Tehran Friday prayers.

Rafsanjani’s loss received widespread coverage in hard-line media who have openly attacked Rafsanjani since the 2005 presidential election, which he lost to Mahmoud Ahmadinejad. Vatan-e Emrooz wrote for the headline of their top story, “A Meaningful No of the Nation’s Experts,” with the “no” in red ink. A picture of a puzzled-looking Rafsanjani, sitting next to President Rouhani, accompanied the story.

Siavash Kaviani wrote an editorial for Tasnim News Agency arguing that despite Rafsanjani’s contributions to the early years of the Islamic Republic and having held various important posts, his decision to move toward the Reformists and allowing Reformists to use him to secure their own place, has caused his political fortunes to fall.

Tasnim also wrote a report analyzing five elections since the 1997 presidential elections in which Rafsanjani either lost, the candidate that he supported lost or he pulled out of at the last minute over low votes.