Why are Reformists criticizing Rafsanjani? 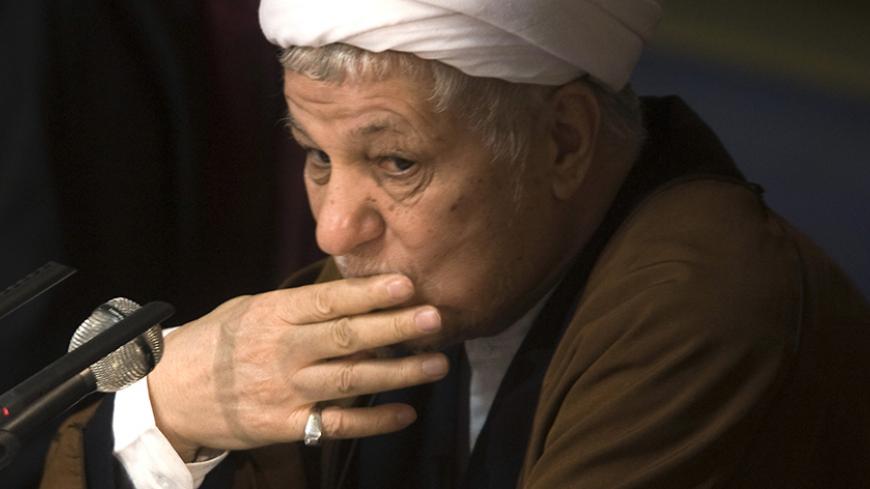 When Ayatollah Ali Akbar Hashemi Rafsanjani, head of Iran’s Expediency Council, criticized Iran’s Guardian Council for their mass disqualification of candidates, including the grandson of the founder of the Islamic Republic of Iran, the usual criticism of Rafsanjani from hard-liners was to be expected. The editor of Kayhan and newspapers linked to the Islamic Revolutionary Guard Corps came out with scathing editorials. Iranian parliamentarian Seyyed Ali Mohammad Bozorgvari accused the 81-year old statesman of suffering from Alzheimer’s. The head of Supreme Leader Ayatollah Ali Khamenei’s office, Mohammad Mohammadi-Gholpayegani, warned that the Assembly of Experts is a “sacred place and political games and factionalism has no path.”

The most surprising reaction, however, has been that Rafsanjani’s harsh comments seem to have sparked a fight between some Reformist and moderate figures.

Rafsanjani's Feb. 1 comments in response to the disqualification of Hassan Khomeini, grandson of Ayatollah Ruhollah Khomeini, by the Guardian Council were bound to stir a reaction. His litany of rhetorical questions, “Where did you receive your qualification? Who gave you permission to judge? Who gave you the podium of Friday prayers and state television?” are indeed rare within the Islamic Republic leadership.

Rafsanjani's claim that the Islamic Republic of Iran is “indebted” to Khomeini and his household was also provocative. And as is the norm in Iranian politics, Rafsanjani did not call out anyone by name. But the comments about Friday prayers and state television, two institutions under the supervision of the supreme leader, are perhaps his strongest and most controversial.

Abbas Abdi, a Reformist political figure who was part of the students who stormed the US Embassy and took American hostages after the 1979 revolution, said that Rafsanjani’s reasoning was “not only weak and unrelated but also incorrect.” He accused Rafsanjani of using a “tribal logic” when it came to defending allies and criticizing enemies. Abdi accused Rafsanjani of both preferring Khomeini’s disqualification and using his possible qualification to his advantage. He also criticized other Reformists for being silent on Rafsanjani’s attack on the Guardian Council.

Mohammad Ali Abtahi, former vice president under Reformist President Mohammad Khatami, also criticized Rafsanjani’s comments. “At the height of consultation and talks and the need for coexistence for a better future … this harsh and sudden attack will only be to the detriment of those disqualified,” he said. “This is not something that Rafsanjani the politician does not know.” Abtahi said that Rafsanjani knows that this type of discourse will attract supporters of Hassan Khomeini toward himself.

Rafsanjani’s longtime ally Sadegh Zibakalam came to his defense against the criticism by Abdi. In an article in Arman Daily, Zibakalam wrote that Abdi’s criticism has more to do with his “old spite” from the Reformist era — there was a time in the 1990s that Reformists were once Rafsanjani’s harshest critics. Zibakalam also accused Abdi of aligning himself with the country’s hard-liners and justifying the disqualification of candidates.

The Guardian Council is still reviewing the cases of those who appealed their disqualifications. President Hassan Rouhani’s vice president, Eshag Jahangiri, was appointed to lead the consultations over the appeals with the Guardian Council. The head of the Assembly of Experts, Mohammad Yazdi, said Feb. 4 that Khamenei told him, “The Assembly of Experts has to be ready in a way that it could elect a supreme leader.” Though Yazdi’s comments were general, he said that the religious credentials of an assembly member must be clear. Hassan Khomeini's religious standing, however, is a matter of dispute.