Rafsanjani to Guardian Council: Who are you to judge?

Ayatollah Ali Akbar Hashemi Rafsanjani has stirred controversy in Iran over his defense of Ayatollah Ruhollah Khomeini's grandson, who was disqualified to run in the elections. 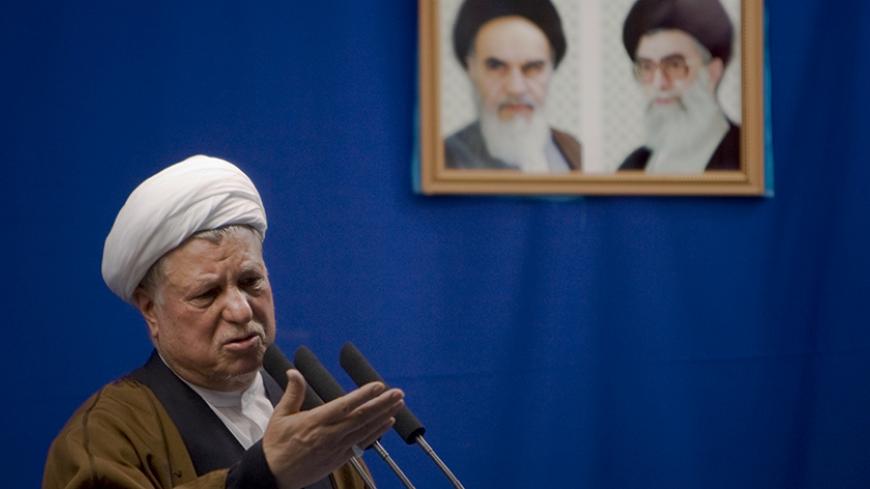 Ayatollah Ali Akbar Hashemi Rafsanjani, the head of Iran’s Expediency Council and onetime close adviser to the founder of the Islamic Republic of Iran, Ayatollah Ruhollah Khomeini, has once again stirred up controversy in Iran with his recent comments in defense of Khomeini’s grandson, Seyyed Hassan Khomeini.

Hassan Khomeini, the most prominent living relative of Ayatollah Khomeini, was recently disqualified by the Guardian Council to run in the Assembly of Experts elections. The Assembly of Experts serves for eight years and is in charge of electing the supreme leader in Iran. Khomeini, who contends he never received the text message informing him to take the written exam, has decided to appeal the Guardian Council’s decision.

Perhaps trying to influence public opinion or the Guardian Council, at a Feb. 1 ceremony for the anniversary of Ayatollah Khomeini’s return to Iran from a 15-year exile, Rafsanjani discussed Hassan Khomeini’s disqualification and perhaps in the strongest language yet, criticized the Guardian Council for the decision.

“They did not give approval to a figure who is similar to his grandfather Imam [Khomeini],” Rafsanjani said. Without addressing the Guardian Council directly, he added, “Where did you receive your qualification? Who gave you permission to judge? Who gave you the podium of Friday prayers and state television?”

Rafsanjani said, “If not for Imam, Imam’s movement and the will of the people, none of this would be here.” Of the Guardian Council’s decision, he said, “They gave a bad gift to Imam’s household at a time we should all be congratulating each other and, God willing, God will forgive you.”

Rafsanjani also said that rather than having the Guardian Council review 12,000 candidates for the parliamentary elections and then claim they ran out of time and were unable to qualify all of the individuals, there should be a more open process. “Let the people choose,” he said. “Public opinion makes less mistakes, and if they do make mistakes, they can make up for it [in future elections], but if we impose elections on them, mischief and things similar to that will come about.”

Rafsanjani’s defense of Khomeini is no surprise. The two, along with President Hassan Rouhani, can be considered to be part of the moderate camp in Iran. They are critics of the country’s hard-line policies and generally receive the support of the Reformists. Rafsanjani’s harsh tone against the Guardian Council caught headlines and was criticized by hard-line media.

Nasim Online published unconfirmed reports that the conservative Combatant Clergy Association would eliminate Rafsanjani’s name from their election list as a result of the comments he made.

Kayhan newspaper’s top story was, “An attack on Imam’s path under the cover of defending Imam’s household.” According to the editor of Kayhan, Hossein Shariatmadari, Rafsanjani’s criticism has more to do with his disappointment that, contrary to his desires, he will not be able to control the Assembly of Experts by filling the important body with allies.