Rafsanjani announces he will run in Assembly of Experts elections

Reformist Iranian media has welcomed the news that Ayatollah Hashemi Rafsanjani will run in the February 2016 elections. 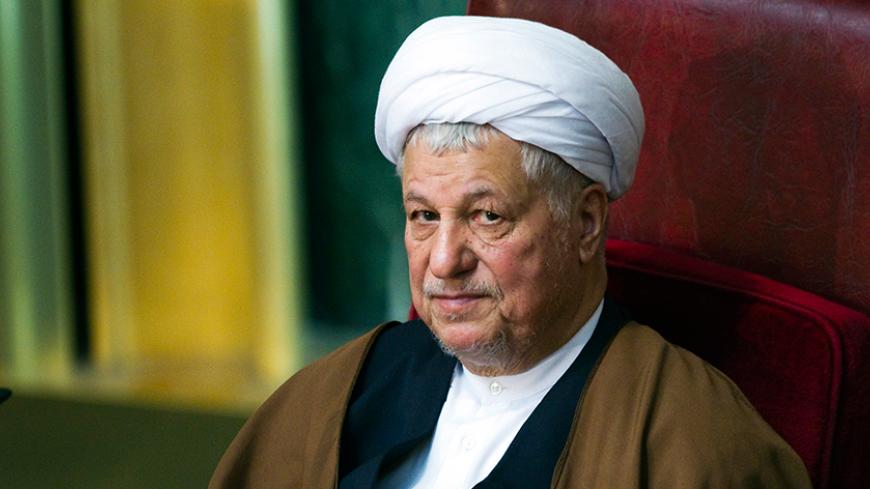 In an interview with the Iranian weekly Toloue Sobh, Ayatollah Hashemi Rafsanjani officially announced that he will run for re-election to the Assembly of Experts in February. Rafsanjani called the assembly and the coinciding parliamentary elections “one of the most important elections,” adding, “anyone who has an Islamic and national responsibility must prepare themselves to have a presence in the elections.”

Rafsanjani ran in an internal election among members to head the Assembly of Experts in March following the death of its chairman, Ayatollah Mohammad Reza Mahdavi Kani. But Rafsanjani lost to the hard-line cleric Ayatollah Mohammad Yazdi. The assembly's role is to elect and supervise the supreme leader of Iran.

Rafsanjani is often referred to as one of the pillars of the Islamic Republic of Iran. He is one of the few remaining clerics to have fought against the shah’s government before the Iranian Revolution and have a close personal relationship with the founder of the Islamic Republic, Ayatollah Ruhollah Khomeini. But since the 2009 contested presidential elections, Rafsanjani’s political fortunes have declined.

While Rafsanjani is still a member of the Assembly of Experts and heads the Expediency Council, he still seeks greater political influence. After his comments, the former president (1989-97), who also headed the Assembly of Experts from 2007 to 2011, was on the front page of a number of Iranian Reformist newspapers with glowing coverage.

Saman Saberian wrote in Shargh Daily on Aug 4, “It’s been 50 years that he has been active in politics, but he has not passed it up. Rafsanjani, despite the criticisms, spite and protests, is from a type of political school that is a good example of a political [role model] in a world of political conflict.” Saberian wrote that despite legitimate criticism against Rafsanjani when he was in power, he is someone today who could open Iran’s closed political environment.

Political analyst Sadegh Zibakalam’s article “Rafsanjani’s message to moderates: Do not fear hard-liners” appeared in the Aug. 4 Ghanoon Daily. In the article, he saw two possible scenarios resulting from Rafsanjani’s decision to run in the Assembly elections in February. One is that the Guardian Council disqualifies his candidacy, just as it did in the June 2013 presidential elections; this, however, would create more controversy and doubts about the oversight body. The second scenario is that Rafsanjani runs and his popularity and overwhelming votes create confusion and disarray for conservatives.

Zibakalam wrote that Rafsanjani’s participation in the election would motivate and energize moderates to run in larger numbers, but that his disqualification would make a large number of lesser-known candidates stay away from the elections.

The front page headline of the Aug. 4 edition of the Ebtekar was of Rafsanjani walking through opened curtains with the headline “The Ayatollah arrived.”

Rafsanjani has not remained quiet on foreign policy issues. He is one of the loudest advocates of better relations with regional rival Saudi Arabia and has not been quiet about his staunch support of nuclear negotiations. During a meeting with Ministry of Education officials Aug. 4, Rafsanjani said one of the aspects of the nuclear deal is that "the taboo of negotiating with America has been broken.”