Although Ebrahim Raisi has been generally mum about his potential foreign policy focus, some recent comments offer clues to the approach his administration could take if he wins the elections June 18. 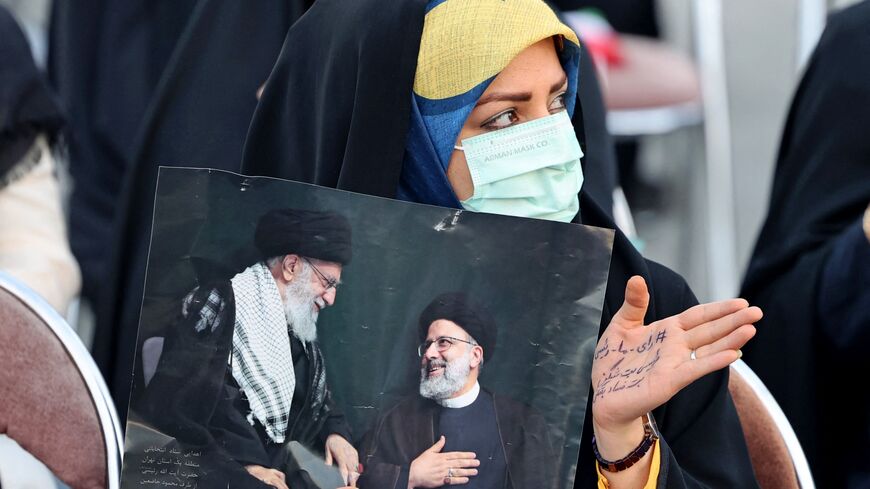 A supporter of Iranian presidential candidate Ebrahim Raisi holds a picture of him (R) with Iran's Supreme Leader Ayatollah Ali Khamenei during an election campaign rally in the capital Tehran, on June 14, 2021. - ATTA KENARE/AFP via Getty Images

With Iran's June 18 presidential election just days away, observers in Iran and abroad are considering the potential agenda and priorities of the next administration. Yet analyzing the possible foreign policy of Ebrahim Raisi — the judiciary chief who is the front-runner in the presidential race — is no easy task, as he has usually shied away from talking about it. The hard-line Iranian cleric did, however, address foreign policy June 12 during the third and final presidential debate.

"Let’s make it clear. We would definitely abide by the JCPOA in the format that was approved with nine clauses by the Supreme Leader [Ayatollah Ali Khamenei], as it a contract and a commitment that governments must abide by," he said, using the abbreviation for the formal name of the 2015 nuclear deal, the Joint Comprehensive Plan of Action.

These remarks by the Principlist presidential candidate come at a time when hard-liners and the political front he belongs to have consistently opposed nuclear talks and reprimanded the current administration for holding talks with the United States and the West on Iran's nuclear program over the past eight years, since President Hassan Rouhani took office in 2013.

That is not all. Later in the presidential debate, Raisi seemed to be distancing himself from other hard-line candidates who opposed legislation to bring Iran into compliance with the Financial Action Task Force (FATF), a Paris-based money laundering watchdog. Passing these bills is needed for Tehran to establish international banking ties.

Abdolnasser Hemmati, a moderate former central bank president who was one of the candidates in the presidential debate, favored engagement with the world and approving FATF-related bills.

Raisi responded by saying, "Where did you read my mind with regard to FATF? FATF is a contract and matter the bulk of which currently being implemented in the country and only a part or two of which are still awaiting the Expediency Council’s decision."

These unexpected remarks by Raisi came as a shock to many.

Saeed Jalili, another hard-line presidential hopeful from the same political camp as Raisi, reacted quickly during the debate. The former nuclear negotiator, who has been a staunch critic of the signing of the JCPOA, said, “Let me say with certainty about FATF. We do not need to know whether this is in our best interest or not. I firmly declare that the signing of conventions is of no use to our country. I am ready to debate and discuss this issue with anyone.”

Jalili, who many had previously perceived as having become a candidate to provide support for Raisi in the debates, also said of the nuclear accord, "The JCPOA is a document of Iran's credit, not our debt. We have paid for the JCPOA and today we have to be creditors [rather than debtors]," in an apparent reference to nuclear talks in Vienna that include indirect participation of the United States. The Trump administration withdrew from the JCPOA in 2018, and as no agreement has yet been reached between the Rouhani and Biden and administrations on the nuclear deal, sanctions against Iran are still in place.

Many observers had previously speculated that Jalili would withdraw from the elections in favor of Raisi in order to gain the post of foreign minister, a step up from the post of secretary of the Supreme National Security Council that Jalili held in President Mahmoud Ahmadinejad's government. The front-runner's remarks created a significant gap not only between Jalili and Raisi but also between Raisi and his bloc, namely the Principlists in the parliament and in parallel and military institutions, as well as media close to the hard-liner camp.

Still, the fact that Raisi has made few comments on foreign policy during his election campaign makes it difficult to ascertain what his potential future government's foreign policy might be.

The hard-line presidential candidate carefully tried to touch upon the supreme leader’s role in approving the JCPOA in the few words he uttered on the deal. However, Raisi is probably well aware that a significant portion of the parallel government institutions that are run by Khamenei rather than the president have seized any opportunity to try to bring the JCPOA to an end; these institutions happen to back Raisi in the election.

Still, in the final debate, Raisi addressed Hemmati and the Rouhani government by saying, "Gentlemen, you cannot implement the JCPOA. The JCPOA must be implemented by a powerful government. Foreign power is an extension of internal power."

Raisi seemed to be saying he could implement the nuclear deal better than the Rouhani administration. If this were to happen, a significant portion of the internally organized opposition and sabotage of the agreement could fade away.

Raisi may have been telling the West not to worry about him assuming the presidency because he would abide by the commitments of the Rouhani administration.

But the problem with this is that Raisi, if elected, could, like Rouhani, wind up struggling with a hard-liner camp used to opposing the nuclear deal and opposing de-escalation with the West. It is not clear how Raisi could overcome this internal opposition.

When registering for the presidential elections at the Interior Ministry on May 15, Raisi said only one sentence about his government's foreign policy. "The foreign policy of the establishment is to engage with all countries, especially neighbors. We would engage with those who do not seek animosity toward us in a friendly, dignified and powerful manner," he said. Raisi did not elaborate on his foreign policy plans in the first two presidential debates or in his addresses to supporters.

When it comes to detailing foreign policy, Raisi resembles another Principlist presidential candidate in previous elections, former Tehran Mayor Mohammad Bagher Ghalibaf, who is not running in this year’s race. "Foreign policy is not within the authority of the government and the president," Ghalibaf told Iranian state television on May 28, 2013. "If someone says that I will change my foreign policy 180 degrees after winning the election, he would be making a false claim." This approach to foreign policy might have origins in Khamenei’s viewpoints. Khamenei said on May 2 in reaction to Foreign Minister Mohammad Javad Zarif's controversial remarks about foreign policy in a leaked audio file, “Everybody must know that everywhere in the world foreign policy is related to the superior apparatuses and the most high-ranking officials. It is the superior apparatuses who determine foreign policy and the Foreign Ministry only implements their decisions.”