Iran is inching closer than ever to withdrawing from the Joint Comprehensive Plan of Action as it finds European steps toward maintaining the deal too little, too late — a perception exacerbated by more European non-nuclear sanctions. 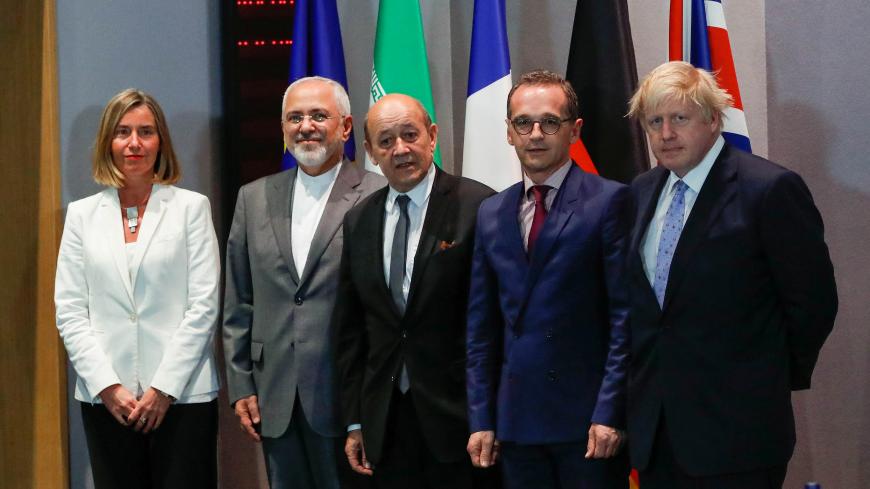 When President Donald Trump pulled the United States out of the Joint Comprehensive Plan of Action (JCPOA) in May, Iran was expecting the European signatories to the deal to engage in serious efforts to uphold it. Indeed, on the very same day as the US withdrawal, President Hassan Rouhani announced in a televised speech his government's plans to launch intense, short-term negotiations with Europe to determine whether Iran should remain in the pact.

Eight months later, France, Germany and the UK issued a joint statement on the setting up of a transaction channel dubbed the Instrument in Support of Trade Exchanges (INSTEX), meant to keep trade with Iran flowing. The mechanism, the so-called E3 announced, was to be based in Paris and managed by a former German banker, with a British-led board. But while formally registered, INSTEX is still far from being operational.

In their joint statement, the E3 made it clear that the channel would be limited, at least in the short term, to vital trade in food and medicine, an indication that INSTEX may do little to benefit the greater Iranian economy, which is in dire need of investment by large foreign firms as a remedy in the face of US sanctions. Still, the establishment of the payment channel can be seen as a positive political step amid an adverse psychological atmosphere for Iran; this could explain why INSTEX’s registration has been welcomed, albeit cautiously, by Iranian officials.

Yet hopes that the move will be sufficiently encouraging for Iran to stay within the deal are dim. Ever since the JCPOA was inked, the E3 has repeatedly expressed concern over Iran's missile program and its regional activities. On Jan. 9, the European Union placed two Iranian individuals as well as a department of the country's Intelligence Ministry on its sanctions list for what it called Tehran's role in a failed bomb plot in France. Weeks later, the French foreign minister warned that if progress is not made in talks with Iran about its missile program, Tehran will face new sanctions.

The US departure from the JCPOA has in the past year triggered an exodus of large European companies from Iran. In other words, Europe has not provided Iran with the benefits that the Islamic Republic hoped to gain from the agreement. This has now brought to the fore a serious debate in Tehran over whether to remain committed to a deal which is not benefiting it. It has also exposed the Rouhani administration to cutthroat criticism and pressure from the country's hard-liners.

"Thanks to the Rouhani government's weakness, the Europeans who were expected to bring us guarantees [of the promised dividends under the deal] slapped us with sanctions," wrote Kayhan, a conservative paper affiliated with the office of Iran's supreme leader. The Jan. 8 editorial, which referred to fresh EU penalties, noted that rather than imposing sanctions on Iran, Europe must clarify why it is harboring "such terror groups as the MEK [the exiled Mujahedeen-e-Khalq opposition group] and Al-Ahwaziyah [the Arab Struggle Movement for the Liberation of Ahwaz], which have killed Iranian civilians." As a staunch opponent of the nuclear deal with a cynical view toward European intentions, Kayhan also highlighted Europe's unfulfilled promises related to the landmark accord. "The only measure to counter Europe's growing impudence is for Iran to immediately depart from the JCPOA," the editorial concluded.

Voices of discontent about INSTEX continue to be heard from hard-line figures in Iran who have been relentlessly opposing the JCPOA. In a chain of tweets, Mehdi Mohammadi, a prominent conservative pundit, hit out at the E3 countries, describing them as "weak and untrustworthy conspirators." He warned that in a matter of six months, Iran will regret pinning its hopes on Europe.

The European policy of compartmentalizing the JCPOA from other thorny issues couldn’t be more evident in the tensions reported in a Jan. 8 meeting between Iran's Deputy Foreign Minister Abbas Araghchi and European ambassadors, who warned that their governments would not tolerate Iran's missile program and assassination plots on European soil.

While expected to do more to mitigate the impact of the US departure from the JCPOA, Europe has shown no signs of compromise on non-nuclear matters of dispute with Iran. As such, it has even reportedly failed to protect ordinary Iranians, including students who cannot open accounts with European banks. In another setback, Germany announced Jan. 21 that it was banning Mahan Air. As these negative impacts are increasingly being felt by ordinary Iranians, the measures are likely to further convince Iranian public opinion that the country should bid farewell to the JCPOA.

"Europe's current Iran policy is founded on the key principle of differentiating between the JCPOA and such matters as the missile program and Iran's regional presence," European affairs analyst Yasser Nour-Alivand told Al-Monitor. "Therefore, they will continue to maintain pressure on Iran over its missiles and regional influence while implementing INSTEX in a way that it would not interfere with the non-JCPOA sanctions on Tehran."

Nour-Alivand said that as long as Europe proceeds with such a policy, Iran would be better off reducing its compliance with the JCPOA. "While making sure that the basis of the JCPOA remains unharmed, Iran will be sending an important signal to the Europeans that warnings about a withdrawal from the JCPOA are not empty threats and that any coming decision will be made in proportion to future European steps," the analyst said.

The current circumstances surrounding the JCPOA are highly reminiscent of the atmosphere that prevailed after the failures of the 2003 Sadabad Declaration and the 2004 Brussels Understanding. Back then, Iran’s European interlocutors ultimately gave in to pressure from US President George W. Bush and failed to safeguard the deals. In response, Iran resumed its enrichment program, which it had voluntarily suspended. Those developments ultimately brought about numerous implications for both Iran and the wider region: The Iranian nuclear program was fast-tracked, and backed by the country's hard-liners, and Mahmoud Ahmadinejad — who openly advocated defiance of the enrichment freeze — was elected president in 2005. The West imposed extensive punitive measures to force Iran to change course.

Now, a repeat of history is highly probable. While, unlike in 2003, the Europeans are stressing the necessity of sticking to the deal, they also are demonstrating little willingness to undertake serious practical measures that would allow Iran to enjoy the promised dividends in exchange for the commitments it has lived up to under the agreement. This European approach is, therefore, pushing Iran toward considering — more seriously than ever — a departure from the JCPOA as its only option.