Amid rising anti-Americanism in Iran, attitudes are hardening, even among moderate elites, with some now espousing the use of the nuclear program as a deterrent. 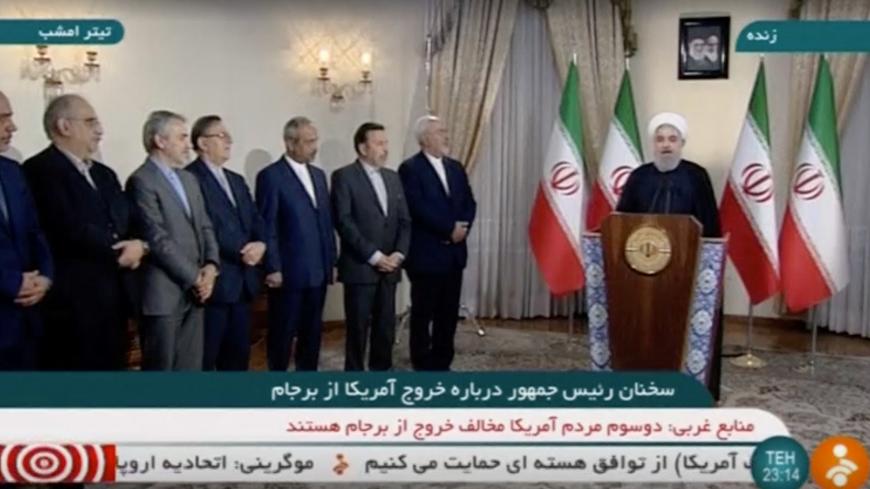 Iran's President Hassan Rouhani speaks about the nuclear deal in Tehran, Iran, May 8, 2018, in this still image taken from video. - IRINN/Reuters TV via REUTERS

On the first anniversary of the US unilateral withdrawal from the Joint Comprehensive Plan of Action (JCPOA), Iran's Supreme National Security Council announced that Tehran will partially cease performing its commitments under the accord, in accordance with Articles 26 and 36. The statement continued that further steps may be ahead, unless the European signatories uphold their obligations within 60 days.

"We had agreed to cap our uranium enrichment at the 3.6% level. But [after the 60-day deadline] there will be no such limit," President Hassan Rouhani said the same day. "We will also adopt certain measures regarding the heavy water reactor facility in Arak."

From the outset, Iran's hard-liners rejected the 2015 nuclear deal, lamenting it as a series of humiliating concessions to the West in exchange for nearly nothing. They repeatedly demanded that Iran quit the agreement. With Rouhani's stance now marking a significant shift toward their argument, hard-liners no longer find themselves isolated. The idea of suspending nuclear commitments, in fact, now dominates Iran's political sphere and has become the mainstream attitude among political elites.

"Trump maintains the flawed assumption that continued pressure will force Iran into negotiations and that Iran will stay in the deal no matter the circumstances [for Iran]," said Diako Hosseini, a foreign policy analyst at the Center for Strategic Studies, which is affiliated with Rouhani's office. "But by setting that deadline, the Iranian government disproved Trump's theory. By intensifying the pressure, the United States will be only diminishing its chances of bringing Iran to the negotiating table. That will also trigger a shift by Iran from the status quo. Given the overall history of its strategic decisions, the Islamic Republic is more likely to put war before humiliation."

Calls for Iran to fully withdraw from the deal were generally unpopular around the end of Barack Obama's presidency. Back then, many across the political spectrum in Tehran interpreted Obama's outreach for dialogue as a genuine effort for diplomacy. But Trump's negative record and his relentless hostility toward Iran has given impetus to an Iranian departure from the JCPOA, an option that is gaining momentum among the public.

Some Iranian observers also propose a deterrent foreign policy within a realist framework. "Given the fact that there are a few in the Trump circle who advocate war on Iran, it will be logical for the Islamic Republic to partly snap back its nuclear program to gain a certain level of deterrent power," said Tehran-based foreign policy analyst Aziz Hatamzadeh. "Since the US government has proven disloyalty to [its commitments under] the JCPOA, and the other signatories are either unwilling or unable to provide Iran with the expected dividends, Tehran will need an effective bargaining chip in the potential negotiations. That bargaining chip could be guaranteed by a resumption of the nuclear [fuel] cycle."

Foreign Minister Mohammad Javad Zarif has repeatedly opposed deterrent strategies based on the nuclear program. Yet Iran's political elites share the opinion that Europe and the world assume that Tehran will stay in the deal at any price, which is probably why Europeans have made little effort to help Iran reap the benefits from the pact.

"Instead of demonstrating some accountability regarding its failures in the JCPOA, Europe has been piling pressure on Iran over its missile program and regional policies, because it has understood how the JCPOA matters to Iran in terms of security," Yasser Nouralivand, with the Tehran-based Research Institute of Strategic Studies, told Al-Monitor. According to Nouralivand, the Trump administration is dead wrong to believe that mounting pressure will push Iran toward dialogue. "Negotiations under the current circumstances will be a lose-lose game for Tehran," he warned.

Together, such theories have strengthened realist approaches toward the nuclear deal in Iran. Indeed, a brief review of Iran's recent history indicates that authorities never enter any talks under unequal conditions; they will abide by international regimes and agreements, as long as promised benefits continue to be secured. One year after Trump’s withdrawal from the JCPOA, Iran's "strategic patience" will likely wear out, with Tehran inching closer to rebooting its nuclear program.

But the debate over the level and speed of the reinvigoration of nuclear activities remains unsettled. A group of hard-liners has gone to extremes by proposing that Iran accelerate nuclear fuel cycle activities — including uranium enrichment — and, if necessary, even pave the way to build nuclear weapons. They consider such steps as tools to pressure the United States and Europe. But the impeding issue is the longstanding fatwa by Iran's supreme leader that forbids atomics arms. "We do not believe in atomic bombs and weapons, and will not pursue such a program, because under our religious principles any use of weapons of mass destruction is forbidden," Ayatollah Ali Khamenei said in a 2010 speech.

Nonetheless, it is undeniable that Iranian society is increasingly disinclined toward diplomacy and dialogue. Back in 2013, Rouhani entered office on a platform of more engagement with the West and a settlement of the nuclear standoff. Today, even the moderate president has come to realize that rapprochement with the current US administration is no longer favored by political elites and many ordinary Iranians.

"Anti-Americanism has grown tremendously in Iran," Ghadir Nasri, a professor of political science at Kharazmi University, told Al-Monitor. "The Islamic Republic may find it essential to revive this approach, which is based on realist independence."

Should Europe fail to meet Iran’s conditions within the 60-day period, the Islamic Republic is expected to drop one commitment after another, paving the way for a full departure from the pact.

The current Iranian policy could deter further pressure from Washington and force the United States and Europe to recognize Iran's rights in potential future negotiations. But there is another side to it, too. With US pressure ratcheting up unabated, Iran may conclude that military confrontation will better serve its interests than humiliation at the negotiating table.