How Khamenei made Abe's Iran visit a mission impossible

Japan's prime minister was in Tehran to deliver a message of rapprochement from the US president. But Shinzo Abe received a tough albeit respectful response of noncompromise from the Iranian leadership. 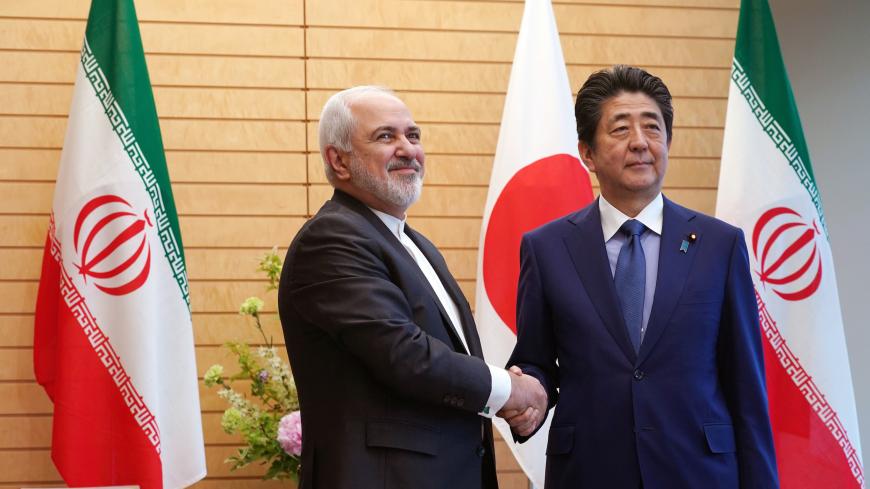 Japanese Prime Minister Shinzo Abe arrived in Tehran June 12 for a two-day state visit that was widely seen as a mission to alleviate tensions between Iran and the United States. Little came out of Abe's meeting with Iran's President Hassan Rouhani, and their joint presser offered nothing beyond typical diplomatic exchanges. Between the lines, however, it could be read that Abe had embarked upon a tough journey in trying to bring Iran and the United States closer together.

The day after, Japan's premier sat down with Supreme Leader Ayatollah Ali Khamenei. Details of talks between Khamenei and visiting world leaders are exclusively covered by his office's special media team, who most often release an edited text-only version of his remarks. In the case of Abe, nevertheless, the office released video excerpts of his comments in a rare media gesture that had a clear purpose.

"I have no reply for Trump, because I don’t think he deserves any message exchange. I will never give him a reply," Khamenei was heard saying in the video. Given the Trump administration's recently tightened measures against Iran, the supreme leader's reaction was no surprise to those at home, who are holding consensus that dialogue with the current US government would be futile and even detrimental to Iran's interests. What further seems to have triggered the Iranian leadership's firm response is the nature of proposals offered by the Japanese mediator. The package Abe delivered did not succeed in luring the Iranians and balancing their attitude toward the US government.

"The proposals Mr. Abe presented on behalf of the Americans were not concrete and thus unworthy of significant attention," an informed source told Al-Monitor on condition of anonymity. "The Japanese premier conveyed Trump's message that Iran regime change is not his option. But this is in clear contradiction to the pressure his administration is exerting upon the Islamic Republic. Besides, what Iran needs at the moment is not words, but solid action on easing the economic strains and a removal of the sanctions," the source added, noting that a proposal which cannot be implemented does not pose any charm to Iran. "Tehran is not willing to be used as a tool in Trump's hand for publicity within his reelection campaign," the source pointed out.

Amid the heightened tensions, Iran's hard-liners are encouraging the state to act with unyielding resistance and take the strongest reciprocal measures. Kayhan — an ultraconservative daily affiliated with Khamenei's office — dug out a historical and religious allusion to highlight what it considered the value of his comments. The June 21 editorial, written by Hossein Shariatmadari, likened the Iranian leader's firmness to that of Moses the prophet, who, according to the Islamic narrative, threw his walking staff before the Pharaoh and his magicians, where the stick turned into a dragon, swallowing up everything the magicians had presented to undermine his divine, miracle-performing powers.

Similarly, Vatan-e Emrooz — known for its ferocious columns and sharply worded headlines against Rouhani's moderate policies — hailed the supreme leader's reaction for bringing "humiliation" upon the US president.

Khamenei's seemingly uncompromising posture has also further strengthened the view among Iran's political elite that a departure from the Joint Comprehensive Plan of Action (JCPOA) is now a viable option. Addressing the Shanghai Cooperation Organization summit in Dushanbe, less than two days after Abe's departure from Tehran, an adamant-looking Rouhani warned that "Iran cannot afford to be the sole remaining side committed to the JCPOA."

According to Alireza Akbari, a former Iranian deputy defense minister (1997-2005), Abe's visit was not an effort to open up a direct line of interaction between Iran and the United States, because that would be immature and abrupt. "He was here to deliver some message or warning while conducting a feasibility study, which he did. But the result of the test was unexpected for Abe, Trump and all the fervent advocates of US-Iran rapprochement," Akbari told Al-Monitor.

In Akbari's view, the visit revolved around four agenda points:

But in his meeting with Abe, the supreme leader clarified Iran's position of distrust and its rejection of any negotiation under the current circumstances, signaling that Washington's carrot-and-stick policy will not work on the Islamic Republic.

"Iran will not go to the negotiating table under pressure," said Diako Hosseini, a senior analyst with the Tehran-based Center for Strategic Studies, a think tank that advises Rouhani’s administration on foreign policy as well as internal affairs. "Tehran's response to Washington will be reciprocal. It will return insults with insults, and the same holds true for gestures of honesty. If the US government has genuine intentions behind its offer for dialogue, it needs to alter the current approach. That change in behavior they can demonstrate within the coming three months, before the US General Assembly in New York."

In the round, what is more than obvious at the moment is that Iran is not content with the nature of Trump's outreach. The Islamic Republic has repeatedly proven its utmost sensitivity and intolerance toward the stereotypical carrot-and-stick policy. Recent history has it that Tehran enters talks only on the basis of mutual respect and equal conditions, when the other side lifts pressure and refrains from hostile rhetoric, at least temporarily.

Within Iran's political circles, an argument that is gaining momentum is that the leadership in Tehran will not follow the North Korean model in its dealings with Washington, as the Islamic Republic is determined to reject conditions that pushed Kim Jong Un to the negotiating table. In that context, an Iranian rapprochement with the Trump administration remains an impossibility, unless there are assurances that the talks will be sincere and serious. The Iranian leadership understands that the fruit picked from such negotiations — as seen in the case of Kim — will be cut off into a few photo-ops, something Trump badly needs for his 2020 election campaign.