Though President Donald Trump has encouraged the visit, Japanese Prime Minister Shinzo Abe has limited room to maneuver as he visits Iran this week to try to advance US-Iran dialogue. 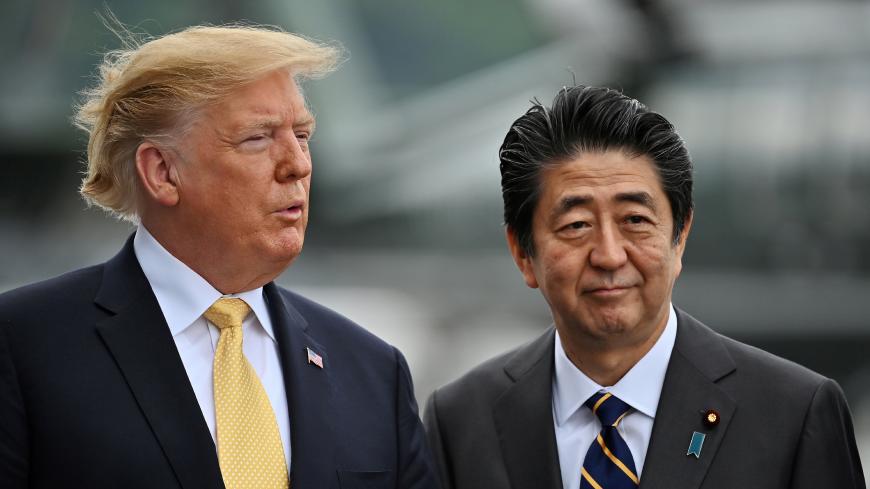 WASHINGTON — When Japanese Prime Minister Shinzo Abe makes a historic visit to Iran this week, he will do so with a rare nod from US President Donald Trump to see if he can facilitate US-Iranian dialogue to ease tensions. But with the Trump administration doubling down on its maximum pressure campaign and Iran insisting on a US return to the 2015 Iran nuclear deal before any new US-Iran talks, Abe has narrow room for maneuver.

“With regards to what Abe intends to achieve, it would depend on how far he is willing to carry the burden on his shoulders,” Koichiro Tanaka, the president of the Institute of Energy Economics, Japan, and a former Japanese Foreign Ministry official who worked on Iran, told Al-Monitor by email. “If he is trying to defuse some amount of tension, that could be achievable, knowing that it would be a short-lived one.”

“If he ventures to salvage the nuclear deal, or even start facilitating dialogue between Tehran and Washington, then Abe will have to show, to the Iranian leadership beforehand, that he is not a mere messenger, or a puppet of Trump,” Tanaka said.

Trump, speaking in Japan last month, expressed encouragement for Abe’s visit to Iran, the first by a Japanese premier in 40 years. Trump suggested he was looking to Abe, an occasional Trump golf partner, to convey his offer for face-to-face talks directly to Iranian leaders.

But despite Trump’s public acknowledgement of looking to Abe’s visit to relay his offer of talks to Iran, US administration officials have downplayed expectations for any breakthrough from the visit.

“I think we’re about six months out from any [US-Iran] meeting,” a senior US administration official, speaking not for attribution, told Al-Monitor.

“It can’t hurt, though,” he added, referring to Abe’s mediation. “[The Iranians] haven’t budged from the precondition of returning to the [Joint Comprehensive Plan of Action].”

Abe is expected to hold meetings with Iran’s President Hassan Rouhani as well as Supreme Leader Ayatollah Ali Khamenei when he travels to Iran on June 12-14, in a year marking the 90th anniversary of Japanese-Iranian relations. Abe himself previously traveled to Iran as a private citizen in 1983, when he accompanied his father, then Japan's foreign minister, on a mission to try to mediate during the Iran-Iraq war. His late father’s mediation efforts did not succeed.

Abe may relay an idea for a meeting between Trump and Rouhani on the sidelines of the United Nations General Assembly's opening session in New York in September, but it will be hard for the Iranians to agree to such a sit-down without a gesture from the American side to ease draconian US sanctions intended to cut Iran’s oil exports to zero, said Ali Vaez, director of the Iran program at the International Crisis Group.

“Probably what Prime Minister Abe is going to suggest is a meeting between President Rouhani and President Trump on the sidelines of UNGA,” Vaez told Al-Monitor. "This may be the last opportunity to do so. Because it is quite unlikely that Rouhani will come to UNGA next year, which is pretty close to US [2020 presidential] elections and Iranian presidential elections [in 2021].”

But there would likely be a precondition on the Iranian side to agree to a Rouhani-Trump meeting in the form of some sort of gesture to ease US secondary sanctions, said Vaez.

“Unless the president [Trump] takes the first step to show he is willing to relieve pressure in order to get to the summit, I don’t think it is likely to happen,” he said.

“I don’t know if Abe is going to Iran with concrete suggestions — some kind of freeze [on US secondary sanctions] potentially could modify the Iranian position, to make it worth the political cost of sitting down with President Trump,” Vaez said. “But absent that kind of gesture from the Trump administration, basically making the first concessions to the Iranians, I doubt there will be any kind of meeting.”

Abe could also propose action by the government of Japan to demonstrate independence and gain the trust of skeptical Iranian leaders, said the Japanese Institute of Energy Economics’ Tanaka.

Presuming Abe is unable to persuade the United States to return to the JCPOA, “he will have to at least maintain Japan's status as a buyer of Iranian crude, in total defiance of US secondary sanctions,” Tanaka said. “So, the issue here is not what kind of message that Abe is supposed to deliver, but his maneuvers would be conditional to what he aims to achieve through diplomacy. If he is going big, and wants to negotiate a sustainable settlement, then he will have to gain the trust of the Iranian leaders, especially Ayatollah Khamenei.”

“Obviously, reasoning Trump to honor JCPOA is doomed to fail, so, the only way to be trusted by Khamenei would be to buy oil under the current existing circumstance,” Tanaka said. “Here, whatever the [Japanese] government will promote, assure, or even threaten Japanese refiners to lift Iranian crude, these private entities will never abide by that sort of suggestion or request from Abe. Hence, the government of Japan will have to import crude on its own, using [the Japan Oil, Gas and Metals National Corporation's] strategic reserve facilities and the Bank of Japan. This is not about circumventing US sanctions: It could be regarded as defying the US face to face.”

“There is no way that Abe will do such thing, without Trump's prior approval and airtight assurance,” Tanaka said. “In any case, Abe will have to play his hands carefully and cleverly: Having limited leeway with Trump, and Iran as well, he will have to maneuver as if he can deliver to the Iranians what they want, which is oil, while never provoking the unstable mood of Donald Trump.”

With the United States announcing new sanctions on Iran’s petrochemical industry June 7, Abe may already be having second thoughts about his mission, Tanaka said.

“It certainly will not be regarded by the Iranians as show of 'goodwill,' and this might have led Abe to have second thoughts about his 'sanctioned mission,'” Tanaka said, of the latest round of US sanctions. “The more the Trump administration shows signs of hostility against Iran, the more Abe will have to aggressively move for 'sanctions-busting,' that would become a political risk for him.”