US President Donald Trump welcomed French President Emmanuel Macron’s proposal to try to arrange a meeting between Trump and Iranian President Hassan Rouhani to discuss prospects for a new deal in the coming weeks. 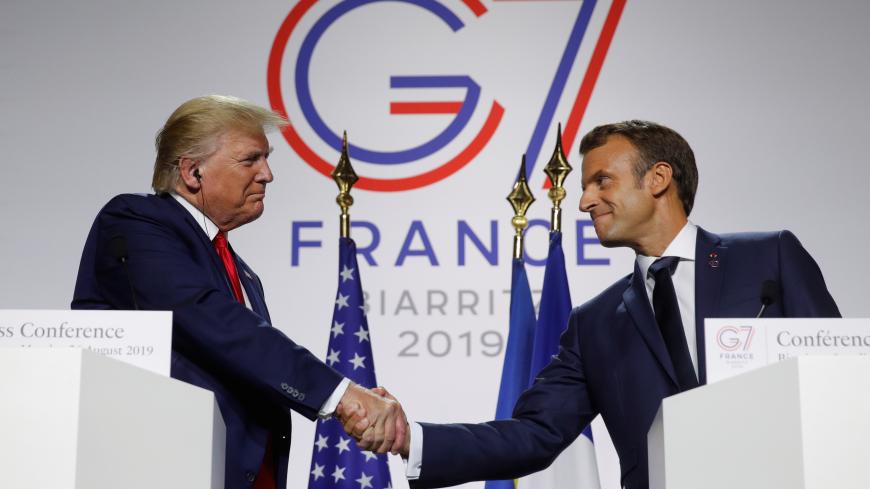 French President Emmanuel Macron shakes hands with US President Donald Trump during a joint press conference at the end of the G-7 summit in Biarritz, France, Aug. 26, 2019. - REUTERS/Philippe Wojazer

US President Donald Trump praised the Iran diplomatic initiative of his host, French President Emmanuel Macron, in Biarritz, France, on Monday, and said he was open to Macron’s efforts to arrange a meeting between Trump and Iranian President Hassan Rouhani in the next few weeks — perhaps during the UN General Assembly next month.

“If the circumstances were correct or right, I would certainly agree to that,” Trump said at a press conference with Macron following the G-7 summit Monday, in response to a question if he would be willing to meet with Rouhani.

Trump said Macron had kept him well informed of his idea to invite Iranian Foreign Minister Mohammad Javad Zarif to Biarritz on Sunday, though Trump decided that the time was not yet right to meet the Iranian envoy himself, he said. Trump made no mention of the fact that his administration imposed sanctions on Zarif last month, reportedly after Zarif declined an invitation to meet Trump at the White House.

“By the way, President Macron told me every step that he was making yesterday,” Trump said, referring to Zarif’s previously unannounced arrival in Biarritz on Sunday, where Zarif said he met with Macron, the French foreign and treasury ministers and with the British and Germans. “He told me long before he came in what was happening. I did not think it was appropriate to meet yesterday. It’s too soon, and things have to be worked out first.”

Trump reiterated that he was not looking for regime change in Iran, and said his terms for a new deal with Iran were, at least in his opinion, simple: no nuclear weapons, no ballistic missiles, and that it lasts for longer than the 2015 Iran nuclear deal, which Trump withdrew from last year.

Macron, for his part, stressed that France was not trying to speak for the United States on Iran, but rather help facilitate diplomacy that would at some point require a meeting between the US and Iranian presidents.

“A road map has sort of been set,” Macron said at the press conference with Trump, of the meeting between Zarif and his French counterpart Foreign Minister Jean-Yves Le Drian on Sunday. “Nothing is absolutely set in stone. And we will have to move ahead together to find an outcome.”

“This morning, President Rouhani said that he was prepared to meet any political leader in the interests of his country,” Macron said. “And that is what I told Minister Zarif. And this is what I mentioned to President Rouhani on the phone as well: that if he agreed to a meeting with President Trump, that my conviction was that an agreement can be met.”

“We know the terms. We know the objectives. But we have to just now sit around the table and make that happen,” Macron said. “So I hope that in the next few weeks, based on our discussions, we will be able to achieve this … and I think this meeting is very important. The last few days have clarified the situation, a lot of messages have been conveyed … and have set the stage for these discussions and for an agreement.”

“If I know that meeting with a person will resolve the problem of my country, I will not hesitate, because national interests are the main principle,” Rouhani said in a speech on Monday.

Trump said he was open for now to Macron’s idea of extending some sort of European credit line to Iran as an incentive to come to talks and return to full compliance with the Iran nuclear deal, and to compensate for some of the lost revenues in oil sales to Europe that Iran has suffered as a result of the US withdrawal from the Joint Comprehensive Plan of Action (JCPOA) and reimposition of crushing oil and banking sanctions.

Al-Monitor’s Rohollah Faghihi first reported Aug. 8 that Macron, in a 100-minute phone call with Rouhani on July 30, brought up the idea of establishing a $15 billion credit line for Iran as a way to compensate for the oil Iran exported to Europe before the United States withdrew from the nuclear deal. Faghihi also reported that France was considering inviting Iran to meetings on the sidelines of the G-7 summit.

Iran “may need some money to get over a very rough patch,” Trump said Monday, referencing a possible “letter of credit” to Iran.

Macron is trying to find a way to advance Iran-US diplomacy, even as some of Trump’s advisers seem to be working against that, said former French ambassador to the United States, Gerard Araud.

“[Macron] is trying to launch a sequence: de-escalation then diplomacy,” Araud told Al-Monitor by email. “With mutual gestures of goodwill. But [there are] two obstacles: the erratic and unpredictable reactions of Trump, and the belligerent attitude of the entourage.”

“My advice would be to try to bypass everybody by working toward a summit, [the] only framework which attracts the interest of Trump,” Araud said, saying that is the advice he in fact did give to Macron.

Esfandyar Batmanghelidj, a close observer of Iranian-European relations and founder of the website Bourse & Bazaar, said he was encouraged by the initial outcome of the G-7 meeting.

“Macron made talks feel close at hand by getting Zarif and Trump in the same city, and his engagement of the Iranians has helped clarify a practical set of requirements for any negotiations — a nominal increase in oil sales and freer access to foreign exchange reserves held abroad,” Batmanghelidj told Al-Monitor by email. “It would appear that the US no longer needs to rejoin the JCPOA for talks to take place if Macron can extract some goodwill concessions which are in Trump's gift to grant.”

“I think this all bodes well,” he continued. “There is a good chance talks can take place in the coming months, and Rouhani stated today that talks would be worth pursuing ‘even if the probability of success is 10%.’"