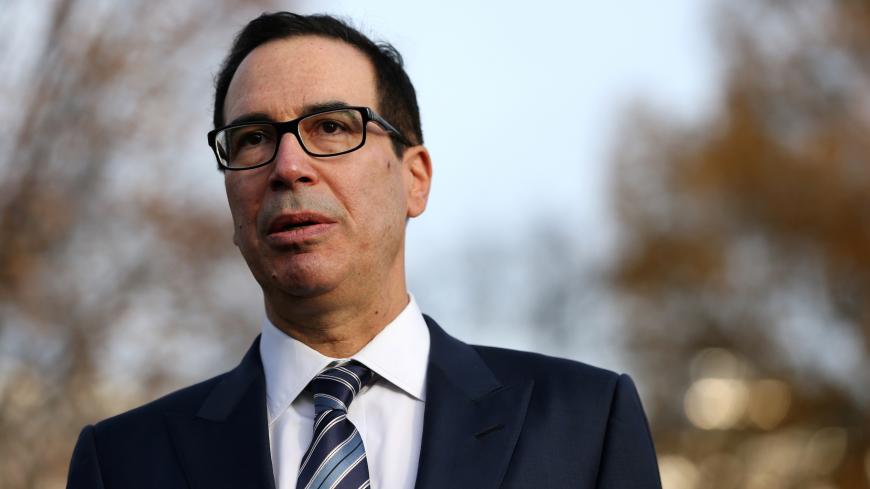 US Treasury Secretary Steven Mnuchin speaks to the news media after giving a television interview at the White House in Washington, Dec. 3, 2018. - REUTERS/Leah Millis

The White House on Thursday said that it had nothing to announce in response to a Kyodo news report that the United States had requested a meeting between President Donald Trump and Iranian President Hassan Rouhani on the sidelines of the UN General Assembly later this month.

The report comes as Trump has mulled French proposals to try to reduce tensions with Iran that include offering Iran a European line of credit in exchange for Iran's return to full compliance with the 2015 Iran nuclear deal and avoiding provocations in the Persian Gulf. Trump, surrounded mostly by hard-line advisers averse to diplomacy with Iran, including national security adviser John Bolton and Secretary of State Mike Pompeo, has increasingly turned to Treasury Secretary Steven Mnuchin when contemplating diplomatic options involving Iran, sources said.

“As the president said yesterday, anything is possible,” a senior US administration official, speaking not for attribution, told Al-Monitor regarding the Kyodo report that the United States has requested a Rouhani meeting. “The president has been clear that dropping sanctions won't be happening.”

“Washington's proposal has been conveyed to Tehran through countries such as France,” the Kyodo report, citing an unnamed US government source, said, adding that Washington hoped the meeting could take place Sept. 25. “Iran had not responded to the proposal as of Wednesday, the source said."

An Iranian official said Iran had received no such request, and downplayed prospects for a meeting.

“It’s fake news,” Alireza Miryusefi, a spokesman with Iran’s mission to the UN, said about the Kyodo report. “We have not received any such request, and there is no possibility for a meeting envisaged between the two presidents during UNGA week.”

French President Emmanuel Macron, when he hosted the Group of Seven summit last month, proposed trying to facilitate a Trump-Rouhani meeting in the next few weeks. Trump said he would be willing, when the time is right.

“I think he’s going to want to meet,” Trump said at a press conference in Biarritz on Aug. 26, referring to Rouhani. “I think Iran wants to get this situation straightened out. … Their economy has tanked entirely. The sanctions are absolutely hurting them horribly. … So I think that there’s a really good chance that we would meet.”

When Iranian Foreign Minister Mohammad Javad Zarif made a unannounced visit to the G-7 summit in Biarritz, France, late last month, one member of Trump’s entourage —in addition to Trump — did not seem surprised.

“The president has said before that to the extent Iran wants to sit down and negotiate, he would not set preconditions to those negotiations,” Mnuchin told reporters at the summit Aug. 25 after plane trackers noted the arrival of the Iranian government plane at the Biarritz airport. “I’m not going to make any more comments about who’s here and who’s not here and what conversations may or may not be going on.”

Trump himself subsequently insisted that Macron had kept him apprised of plans to invite Zarif and the details of their consultations, and belittled news reports that had cited unnamed US officials complaining that the US team had been blindsided by the development.

Trump also expressed familiarity with the French idea for a $15 billion European credit line for Iran in exchange for Iran's return to full compliance with the 2015 Iran nuclear deal and avoiding provocations in the Persian Gulf, and to compensate Iran for oil exports to Europe lost when the United States exited the deal and resumed crippling oil and banking sanctions last year.

“It would be from numerous countries,” Trump said. “It would expire. It would be paid back immediately and very quickly.”

French and US officials did not reveal if the consultations had resulted in agreement for the French package.

US officials have been cautious about whether the Trump administration would consider giving approval to the European measures to try to incentivize Iran to return to full compliance with the nuclear deal and return to the negotiating table.

“I think the US government is studying that,” US Ambassador to the European Union Gordon Sondland told journalists in a phone briefing Wednesday, referring to the French proposal for a European credit line for Iran. “As I said, our policy is maximum pressure on Iran and that continues to be the policy.”

“But the definition of maximum pressure is determined by the president and the president can dial that up and dial that down at his discretion,” Sondland continued. “That's one of the controls that he possesses as president. So the line of credit issue is being looked at. And we don't really have any further comment at this point.”

“The process initiated in Biarritz is not yet complete,” a spokesperson for the French Foreign Ministry told journalists Thursday. “There is still a great deal to be done.”

Rouhani on Wednesday announced that Iran would increase its research and development, including on centrifuges, as a third step in its phased reduction in compliance with the Joint Comprehensive Plan of Action, and give the Europeans two more months to finalize a package to compensate it for lost revenues due to the US exit from the deal and the resumption of draconian oil and banking sanctions.

But Rouhani also offered encouragement for the French effort, and said that Iranian-French consultations had made progress.

“They know what we want and we know what they want, and everything's clear,” Rouhani said Wednesday. “In many instances, we have closed the gap between our views, but in some other cases, we still have our differences and we have not reached the final conclusion."

Rouhani previously seemed to backpedal on prospects for a meeting with Trump, saying Aug. 27 that the United States would have to lift sanctions first.

“If someone is merely seeking a photo opportunity with Hassan Rouhani, that is not possible, unless they lift all the unjust sanctions and respect the Iranian nation’s rights, which will be a game-changer,” Rouhani said Aug. 27.

“I don’t know when such a meeting would be, but if it happened, Trump would be tougher and more clear-thinking than [America] was before,” Netanyahu said.

The Crisis Group’s Vaez said it would not be surprising if Trump requested a meeting with Rouhani at the UN General Assembly; Vaez said he did not know if Trump realized he would have to offer Iran some economic reprieve for one to occur.

“The problem is, the maximum of what he [Trump] is willing to give the Iranians falls short of the minimum the Iranians would need to justify a bilateral meeting with President Trump,” Vaez said. “That is the challenge.”

“I don’t think the French initiative is at this stage doomed,” Vaez said. “But the odds of it succeeding are not that promising.”

Mnuchin’s more visible role in the inter-agency debates on Iran policy and perception as being relatively more moderate has made him a target of gripes and attacks by conservative hard-liners more aligned with Bolton.

“I hope and pray that Steven Mnuchin does not … go down a path that would lead him to be the Neville Chamberlain of the modern day,” Sen. Ted Cruz, R-Texas, said at an event at the Hudson Institute on Tuesday. “I call on Secretary Mnuchin to have a clear and simple answer for the French. Which is no matter how much a handful of French companies may stand to make from doing business with the ayatollahs, America is not going to be part of funding the world’s leading state sponsor of terrorism. Nor are we going to be funding the development of nuclear weapons and ICBMs that could see their manifestation in a mushroom cloud.”

Mnuchin “is the closest thing to a traditional Republican in the entire administration,” said Richard Nephew, former State Department and National Security Council sanctions expert and Iran nuclear negotiator. Nephew, now with Columbia University, told Al-Monitor, “His interest is in stability for business and markets and he doesn't like all of the chaos. He especially doesn't like the China trade war … and he believes that they ought to be able to sort things out if other problems — e.g., Iran — don't break in.”

“If there is a potential deal to be had, and Trump is interested in it, both factors weigh to Mnuchin wanting to be there,” former State Department sanctions expert Peter Harrell, now with the Center for New American Security, told Al-Monitor. “He is very focused on what Trump wants, and he is less hawkish and less ideological on Iran than Bolton is.”

“There is precedent for Mnuchin playing the more pragmatic role,” Vaez said. “If you remember, when the administration was debating reissuing waivers for civil nuclear cooperation, Bolton … [was] reportedly against it, [and] Mnuchin was in favor of renewing those waivers. He won the debate. And so if the president has decided to empower Mnuchin into looking into options for sanctions relief, that is a wise choice.”