A US-Iran breakthrough seems elusive after attacks on Saudi Arabia. 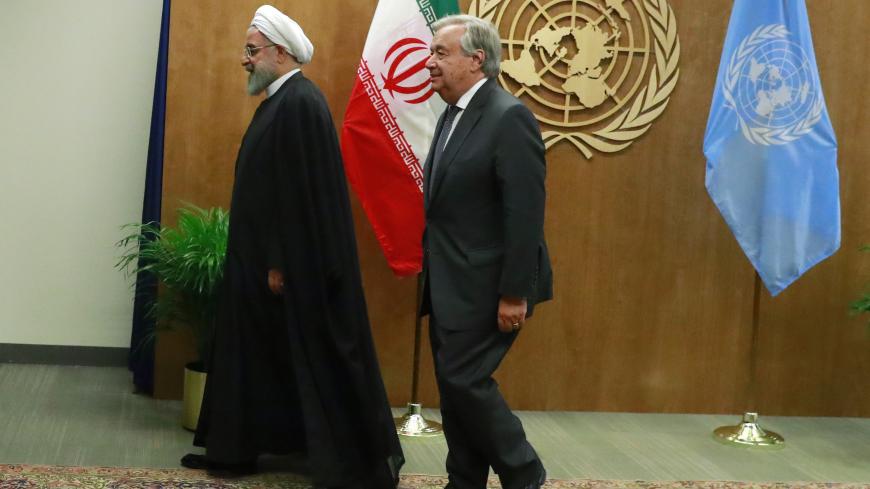 Iran's President Hassan Rouhani walks with UN Secretary-General Antonio Guterres as they meet on the sidelines of the 74th session of the UN General Assembly at UN headquarters in New York City, New York, US, Sept. 25, 2019. - REUTERS/Yana Paskova

NEW YORK — As captured on video, French President Emmanuel Macron on Tuesday prodded Iranian President Hassan Rouhani to meet US President Donald Trump, warning that missing the chance to talk to Trump before he left New York would be a “lost opportunity.”

“If he leaves the country without meeting with President Trump, this is a lost opportunity,” Macron said in a huddle with British Prime Minister Boris Johnson and Rouhani, surrounded by advisers and journalists on the sidelines of the UN on Tuesday. “Because he will not come back in a few months. And President Trump will not go to Tehran, so they have to meet now.”

“You need to be on the side of the swimming pool and jump at the same time,” the UK’s Johnson joined in the effort to sway the Iranian president.

But though Rouhani appeared to smile with amusement throughout the encounter, he apparently resisted the tag-team prodding to get wet, despite the entreaties from the French leader, who has personally spent countless hours on the phone with him and Trump in recent weeks trying to find a formula to reduce tensions and restart talks.

In another video, Rouhani is heard seemingly expressing displeasure to Macron about a statement from France, Britain and Germany the day before that joined the United States in blaming Iran as the likely perpetrator of attacks on a Saudi oil facility Sept. 14. The statement also called for a longer-term deal that addresses regional concerns. "You were going on very well, but you stopped all of a sudden,” Rouhani seemed to tell Macron through a translator.

If the Iranians were going to break the decadeslong taboo on meeting with a US president, the week that Trump might be impeached by the Democratic-led House of Representatives was not likely to be it. In fact, the prospect for a breakthrough Trump-Rouhani meeting or photo-op on the sidelines of the UN General Assembly had receded even before Rouhani landed in New York on Monday, after delays in the United States issuing his delegation’s visas.

“Memento photos are the final stage of negotiations, not the first one,” Rouhani said in his remarks to the UN General Assembly on Wednesday.

Even the prospect of US Secretary of State Mike Pompeo joining a ministerial meeting of the remaining parties to the 2015 Iran nuclear deal on Wednesday morning was almost tragicomically ruled out — perhaps deliberately so — by the fact that Pompeo was scheduled to address the anti-Iran deal United Against Nuclear Iran conference at the same time.

If a lower-level US-Iran encounter happened behind closed doors during the annual gathering of world leaders in New York, neither side has revealed it.

Just two weeks earlier, prospects for a possible breakthrough encounter seemed brighter. On Sept. 10, Trump announced that he had told his hawkish national security adviser John Bolton that his services were no longer needed, in what many saw as a signal that Trump was contemplating possible conciliatory gestures or sanctions relief to get to the table with Iran.

But less than a week later, on Sept. 14, came sophisticated drone and cruise missile attacks on Saudi oil facilities, which Pompeo, and subsequently the E3, have attributed to Iran. While Trump has resisted pressure from hawks for a military response, he announced tougher sanctions on the Central Bank of Iran, and seemed further constrained from any prospect of sanctions relief.

Iranian Foreign Minister Mohammad Javad Zarif, meeting with journalists at the Iranian mission to the UN Sunday, firmly denied that Iran had any role in the Sept. 14 attacks on the Saudi oil installations. But his seeming frustration at having to perform the denials and spend a lot of time fielding questions about the attacks — and his frustration in general — was evident.

One could wonder if Zarif’s frustration privately extended beyond the Americans for pulling out of the nuclear deal and the Europeans for not having come up with a way to compensate for the US withdrawal and reimposition of sanctions. Perhaps it also extends to forces in Iran that might have seen the attack as a way to preclude any possible US-Iran breakthrough in New York.

Zarif’s priority when he came to New York was to prod the remaining parties to the 2015 Iran nuclear deal to come through with concrete action to compensate Iran for the hardship it has endured in the wake of Trump’s exit from the deal and reimposition of crippling economic sanctions. Macron has spearheaded an initiative to try to de-escalate soaring tensions in the Persian Gulf, get Iran to return to full compliance with the nuclear deal and possibly get Trump his long-sought photo-op with the Iranians.

“We have an expression in Persian: You don’t buy the same horse twice,” Zarif told journalists, going on to say Iran and the six world powers had entered into a nuclear agreement that Iran and the other parties had stuck to, after Trump exited it last year. But now the United States is asking Iran to pay more for the horse a few years after the deal was agreed.

If Trump might be open to Zarif’s view of how Iran sees it, one could understand why the Iranian diplomat might feel frustrated that he was being prevented by Iranian authorities from making it directly to him. (At the Group of 7 summit in Biarritz, France, last month, it had been proposed that Treasury Secretary Steven Mnuchin meet with Zarif, but the meeting did not occur.)

The situation, for the moment, seems stuck. The Iranians are unwilling to come to the table without some gesture toward sanctions relief or the United States' return to the deal; and Trump wants his photo-op or face time with the Iranians before he will commit to waivers to even allow the other parties to induce Iran back to the table.

Rouhani, speaking at a press conference Thursday, seemed relieved that he was departing New York without having been forced into a forbidden encounter with Trump. He repeated many of the positions he had raised last year after Trump withdrew from the deal, and said essentially the ball is in the US court. If it wanted to talk with Iran, it could lift sanctions and return to the deal.

If the remaining parties to the deal want Iran to return to full compliance, they can start fulfilling all of their commitments, and Iran will reverse the steps it has taken, he said.

“We are not after any sort of pressure,” Rouhani said through a translator. “We are just after implementing the deal. We hope that all parties would fully fulfill their commitments.”