French President Emmanuel Macron, the man in the middle, is appealing to both sides for compromise. 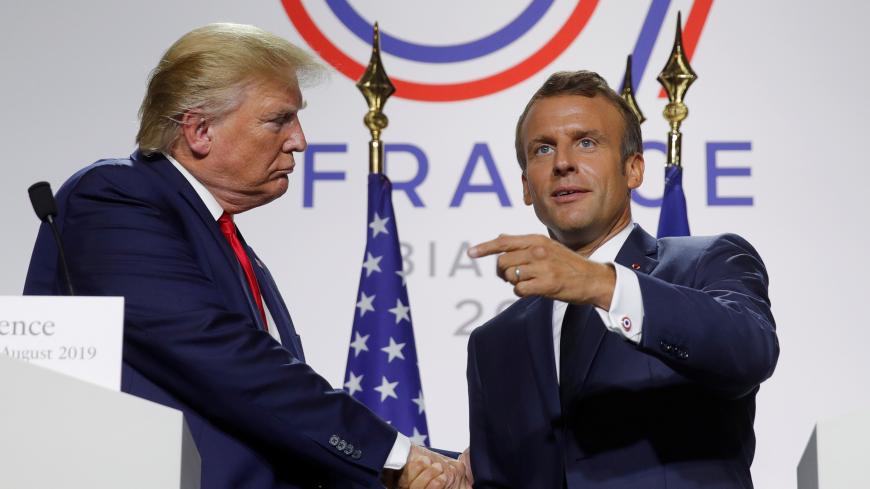 French President Emmanuel Macron shakes hands with US President Donald Trump during a joint press conference at the end of the G-7 summit in Biarritz, France, Aug. 26, 2019. - REUTERS/Philippe Wojazer

Iranian President Hassan Rouhani’s announcement that he had no interest in a “picture” with US President Donald Trump unless the United States lifts “all unjust sanctions” seemed to slam the door on the prospect of a meeting less than 24 hours after French President Emmanuel Macron teased just such a possibility with Trump by his side.

Even though “all” sanctions are unlikely to be lifted soon and Iran’s hawks are doing their best to shut down a meeting, there is still a pulse to this latest round of nuclear diplomacy — assuming there is progress toward resolving Iran’s credit crisis in the coming weeks.

Zarif: 'Our economy is suffering'

Macron’s diplomatic efforts to save what he can of the 2015 Joint Comprehensive Plan of Action (JCPOA) faces its next test on Sept. 6.

Iranian Foreign Minister Mohammad Javad Zarif has publicly and privately expressed exasperation with the Europeans for failing to set up a functional credit mechanism as a workaround to crushing US sanctions imposed last year, while fending off critics at home who seek to undermine diplomacy with the West.

“We have suffered hundreds of billions of damage,” Zarif acknowledged this week. “Our economy is suffering. Our currency has lost 75% of its value.”

Zarif combined the cudgel of threats with a recent diplomatic blitz, including two sessions with Macron over the past week and a tour through Scandinavia followed by meetings with leaders in Japan, China, Malaysia and, in the coming days, Russia. He said that if a credit system is not in motion by Sept. 6, Iran will take a “third step” in reducing its JCPOA commitments. In the first two steps, on May 8 and July 7, Iran said it would exceed a 300-kilogram cap on its low-enriched uranium stockpile and slightly upgraded enrichment past the 3.67% limit in the JCPOA.

Zarif’s mission during his three-hour stopover in Biarritz at the G-7 and in subsequent travels has been to press ahead for some form of exceptions for certain countries from US sanctions on Iranian oil exports, if that can be worked out, and to establish a credit line to partly compensate Iran for the oil it would have sold to Europe after the United States withdrew from the JCPOA and reimposed sanctions and enable financing for Iranian purchase of humanitarian goods permitted under US sanctions. A line of credit could be implemented via INSTEX, the EU barter arrangement to allow trade and investment in non-sanctioned sectors, or some other financial mechanism, reports Al-Monitor's Rohollah Faghihi.

In his remarks with Macron at the G-7, Trump seemed well briefed on this effort thanks to Macron.

While the media focus of Zarif’s G-7 stop was mostly on the prospects of a Trump-Rouhani summit, the discussions on the credit line may have been what Zarif most needed at this stage, if not all he may have wanted.

Rouhani’s chief of staff, Mahmoud Vaezi, said Iran is “almost making good progress” with Europe, writes Faghihi, and that an “economic group” from Iran will travel to France next week.

Macron, who drew attention for his gambit of inviting Zarif to the G-7 sidelines, has seized the initiative to save what he can of the Iran deal and move ahead on a new agreement that could be acceptable to the United States and Iran, Laura Rozen reports.

The French president is a freelancer, suggests David Ignatius. To the contrary, Macron is working the diplomatic channels like a pro. Most importantly, he and Trump have a connection and trust. Trump has made clear Macron doesn’t speak for him, and Macron doesn’t claim to do so. Meanwhile, the French president has developed a strong relationship with Rouhani. Macron is running point within the EU on Iran and the other two European signatories to the JCPOA — the United Kingdom and Germany — will follow his, and ultimately Trump’s, lead.

Russia and China are also committed as signatories to the nuclear deal, and both would likely support an arrangement that allows Iran to sell or pre-sell oil, which would in turn facilitate their trade with the sanctioned country. Russian President Vladimir Putin is of course a wild card and is already positioning himself as a broker by offering his own security concept for the Gulf area, which has so far gained little traction in Washington, Tehran or the region. A rollout of the proposal, which includes plans for a major conference, had been planned around Sept. 20 but was postponed. The concept was circulated at the United Nations in June.

“Moscow is not going to pressure Tehran for better relations with the United States, but it can play the role of mediator,” writes Nikolay Kozhonov. And if the crisis over the JCPOA continues, Russia can live with that too. “If Iran is ready to provide Russia greater access to its economy,” adds Kozhonov. “Moscow can start gradually increasing Iran’s support via the participation in the gray schemes of sanctions evasion and provision of limited diplomatic support.”

Back in Tehran, Rouhani has had to defend his and Zarif’s fragile efforts not to let the JCPOA, their signature diplomatic achievement, deteriorate further.

Hard-line critics forced Rouhani to walk back his Aug. 26 statement, “If I think that meeting with someone can resolve my country’s problems, I will not hesitate, because protecting the national interests of my country is a principle for me,” widely interpreted as a sign that a meeting with Trump was a possibility. Just 24 hours later came the remark about no meetings or photo-ops until all sanctions are lifted.

Rouhani defended the JCPOA as the antidote for what ails Iran’s economy, saying, “Some keep asking that what was the result of negotiation with major powers. After the negotiations, we were exporting over 2.8 million barrels of oil, and billions of dollars of our assets came back to the country.” More pointedly to critics, he added, “Some do not say a word about foreign investments made in our country, but when foreign investors leave the country, they start criticizing about them leaving.”

Two days later, Rouhani backed up Zarif’s diplomacy, saying, “The fact that our country’s foreign minister has visited different parts of the world and is negotiating, visiting France twice in a week, means that the government is making a tremendous effort in serving people and defending their interests. … We need to take advantage of our friendly countries’ potential to reduce the problems.”

Is the door still open?

In Iran, the door to talks with the United States may seem closed, but it remains open, if just a crack. “There is the possibility,” Faghihi writes, “that after the attacks by hard-liners, Rouhani may have adopted a strategy to refuse a possible meeting publicly in order to relieve himself of the internal oppositions’ pressure — all while secretly continuing on the path to negotiations.”

The door remains open for Trump as well. On this, he has been consistent. In response to a question as to whether it seems “realistic” that he could meet Rouhani “within weeks,” Trump replied, “Well, it does,” and that Rouhani is “a great negotiator.” Trump added, “The sanctions are absolutely hurting them horribly. I don’t want to see that. … They’re great people.”

If the Trump administration allows a credit deal to proceed, Iran should take it as good will for a possible meeting and to keep Macron engaged.

As other world leaders have discovered, Trump likes to cut deals in person. Given the impact of sanctions on the Iranian economy, Rouhani might keep the prospect alive, if carefully. His critics at home offer only rhetoric and confrontation, not solutions to Iran’s economic crisis. A better bet may be to follow Macron’s lead.