Tehran issues deadline for bypass to US sanctions

Iran is stepping up its pressure on Europe to devise a successful workaround that will provide economic relief from US sanctions. 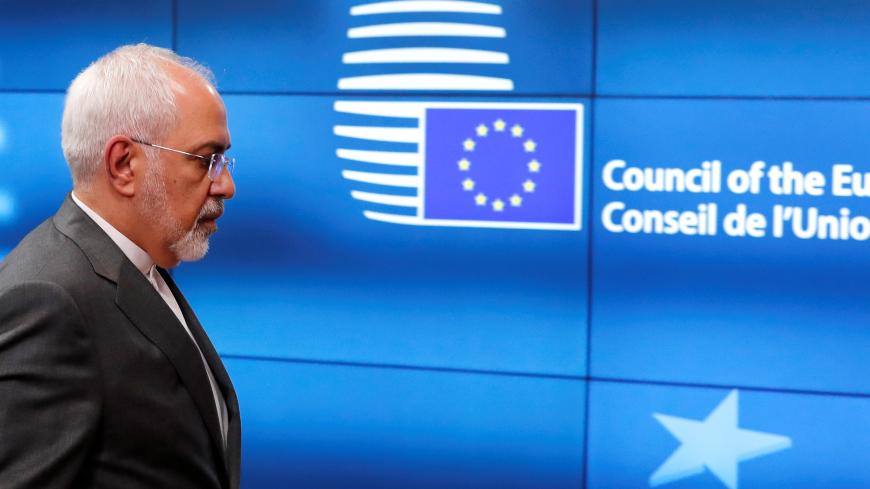 Iran announced Aug. 5 that it will give Europe one month to rescue it from economically devastating US sanctions before Tehran pulls back further from its commitments under the 2015 Joint Comprehensive Plan of Action (JCPOA).

The United States unilaterally withdrew from the nuclear deal in May 2018, saying Iran was not complying.

French President Emmanuel Macron has attempted to trigger initiatives to preserve the JCPOA. On July 30, the Iranian and French presidents discussed in a 100-minute phone call the possibilities for saving the deal. According to two sources who spoke on condition of anonymity, Macron invited President Hassan Rouhani to attend the G-7 summit Aug. 24 at the coastal resort of Biarritz, France, to meet with US President Donald Trump.

Macron promised that many issues between Tehran and Washington beyond the JCPOA would be solved. Rouhani, however, declined to attend or send a representative, which naturally would have been Foreign Minister Mohammad Javad Zarif.

Based on a report published in The New Yorker, Tehran had also rejected an invitation in mid-July from Sen. Rand Paul, R-Ky., for Zarif to meet with Trump in the Oval Office. Zarif voiced concern that, much like Trump’s brief meeting June 30 with North Korean leader Kim Jong Un in the demilitarized zone, the event would be little more than a photo opportunity.

On July 31, the United States applied sanctions against Zarif, citing him as a “key enabler” of Supreme Leader Ayatollah Ali Khamenei’s policies. That action closed the door on any possible negotiations between Tehran and Washington. Zarif said Aug. 5 that he was being punished for refusing Rand’s invitation.

Tehran might have been confused by the White House’s mixed messages, but the move to sanction Zarif left some Iranian officials wondering if they could wait out Trump until the 2020 elections and hope for a new US leader. That idea could take too long or never materialize.

“[US officials] speak of new negotiations, while they have sanctioned the chief negotiator of our country, Mr. Zarif. Therefore, they are lying — and [they adopt] such deceptive [plans] a lot,” Iranian parliament Speaker Ali Larijani said Aug. 3.

In a separate statement the same day, Larijani said, “The one who seeks to resolve the issue through negotiations does not sanction the head of [Iran’s] diplomacy apparatus.”

During his phone call with Macron, Iran's president expressed an inclination toward reaching a solution through Europe. The two then explored the possibilities for Europe buying Iran's oil, which has been Tehran's main demand of Europe since the United States withdrew from the JCPOA and reimposed sanctions.

According to three sources speaking to Al-Monitor on condition of anonymity, in his conversation with Rouhani, Macron brought up the issue of establishing a $15 billion credit line for Tehran as a way around US sanctions, in an effort to meet Iran’s demand.

Based on the sources' information, Iran still has not responded to the proposal. However, in a public speech Aug. 1, Iran's president stated that he has received offers from a number of JCPOA signatories, though he has not accepted them because they have been “unbalanced.” However, he added, “We may reach positive results in negotiations in the coming weeks.” If not, Iran will continue to cut back on the ways it is still cooperating with the JCPOA.

In an interview with Al-Monitor, former French Ambassador to Tehran Francois Nicoullaud said, "The idea of a credit line was first suggested, I believe, by the Iranian side, to ‘prime the pump’ of the INSTEX [Instrument in Support of Trade Exchanges] mechanism [to work around US sanctions]."

He added, “It all depends, of course, on the amount of the credit line. But by no means will this be enough to solve by itself the present difficulties of the Iranian economy.”

In recent weeks, special envoys of Rouhani and Macron have visited Paris and Tehran to find a way to keep the JCPOA alive. Tehran is urging the United Kingdom, France and Germany to honor their commitments to the JCPOA despite US sanctions.

Asked if Europe has the ability to keep Tehran in the JCPOA and fulfill Iran’s demands, Nicoullaud said, “I believe that President Macron is presently working hard at mediating between Iran and the United States in favor of a deal, probably of limited scope but able to reduce the current tensions in the region. Such a deal would have to include the suspension of some US sanctions, notably on oil, and on Iran's side some gestures concerning its nuclear program. Will it work? It’s too early to say, but such a pattern seems to be the only practical way out of the present crisis.”

Meanwhile, more companies are joining INSTEX. A European diplomat who did not want his name revealed told Al-Monitor, "More than a dozen [mainly French and German] companies have registered with INSTEX. This is a good sign.”

He added, “This can become a useful instrument for something more ambitious in the future.”

While many in Tehran have lost faith in Europe’s ability to salvage the nuclear deal — owing to the latter’s past failed attempt to launch an instrument such as INSTEX that would cover Iran oil sales — the next few weeks seem crucial to the life of the JCPOA, which was the result of a decade of negotiations.