While Iran’s president stated that he doesn't want to be part of a photo op for Trump, negotiations for saving the nuclear deal are still making progress. 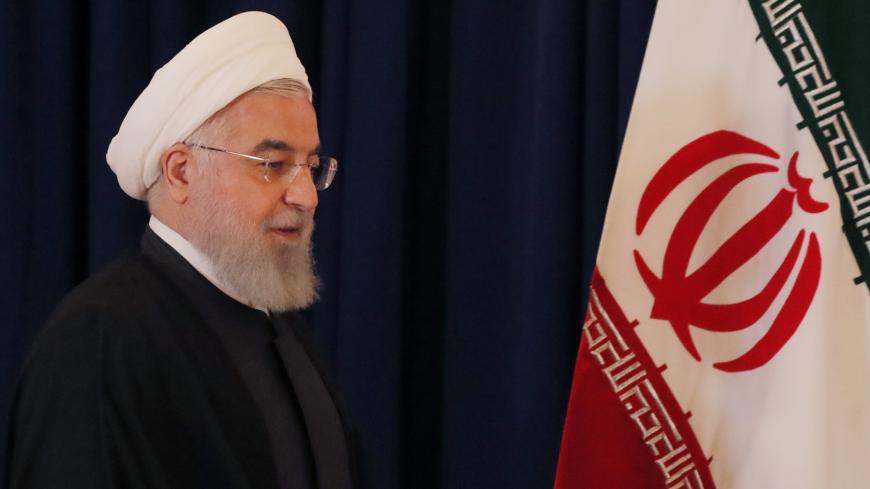 Iran's President Hassan Rouhani walks by his country's flag at a news conference on the sidelines of the 73rd session of the United Nations General Assembly at UN headquarters in New York, Sept. 26, 2018. - REUTERS/Brendan Mcdermid

Iranian President Hassan Rouhani recently hinted at a willingness to attend a meeting with US President Donald Trump. But, amid hopes for a meeting to take place between the leaders of Iran and the United States after four decades, he changed his mind over the last 48 hours.

Rouhani said Aug. 26 in a public speech, "If I knew that I was going to have a meeting with someone and [that the meeting would lead to] prosperity for my country and people's problems would be resolved, I would not hesitate.” Rouhani said a meeting is planned Aug. 29 with “related officials,” including Iranian Foreign Minister Mohammad Javad Zarif. Zarif made an unannounced visit to Biarritz, France, coinciding with the G-7. He came at the invitation of his French counterpart, Jean-Yves Le Drian and, in addition to meeting the French foreign minister, spoke with French President Emmanuel Macron on the sidelines of the summit.

Meanwhile, a short clip of Supreme Leader Ayatollah Ali Khamenei’s speech voicing his opposition to negotiations with the United States was released on conservative media.

Following his comments, hard-liners launched a wave of attacks on Rouhani to force him to retreat from his approach. “Your negotiation [with Trump] will impose another loss and disaster like the [Joint Comprehensive Plan of Action (JCPOA)] on the nation, and … it would have no results other than [to be] a gift to Trump in the upcoming [2020 US presidential elections]. Your phone conversation with [former US President Barack] Obama [in 2013] was a big gift to him and a greater insult to the Iranian nation,” wrote hard-line Kayhan newspaper chief editor Hossein Shariatmadari Aug. 28.

In an interview with Al-Monitor, former Islamic Revolutionary Guard Corps commander and current political activist Hossein Kanani Moghaddam said, “Rouhani may have been influenced by the psychological war of [French President Emmanuel] Macron and Trump. It is wrong to test the ones who have gone back on their words.” Moghaddam added, “For sure, such issues in the foreign policy of Iran are determined by the supreme leader, and the leader has repeatedly stated that the path of negotiation is closed and he hasn’t even set a condition for talks.”

In a change of position Aug. 27, Rouhani set the conditions on Macron's proposal for a joint meeting with Trump: “If someone is merely seeking a photo opportunity with Hassan Rouhani, that is not possible, unless they lift all the unjust sanctions and respect the Iranian nation’s rights, which will be a game-changer.” Rouhani’s retreat may be rooted in what he said Aug. 27 about a meeting that was supposed to take place that day. It is likely that the meeting reached a certain policy and conclusion, leading Rouhani to take a new approach and therefore retreat.

Yet, in fact, Rouhani didn’t rule out any talks with Trump, as he emphasized before the aforementioned sentence: “We [seek to wisely resolve] the issues.”

Nevertheless, there is the possibility that after the attacks by hard-liners, Rouhani may have adopted a strategy to refuse a possible meeting publicly in order to relieve himself of the internal oppositions’ pressure — all while secretly continuing on the path to negotiations.

Meanwhile, some observers are arguing that a meeting between Trump and Rouhani would be possible after Iran gains leverage for potential future talks. Ghodrat Ahmadian, a political science professor and analyst at Razi University in Iran, noted on Aug. 27, “Currently, [a meeting] wouldn't yield any strategic achievements for Iran. … The logical process would be Iran firstly taking its third step of reducing its commitments [under the JCPOA] on Sept. 6, and then starting the [process] of talks with the United States.”

Still, Rouhani’s remarks may indicate that he doesn't see Trump as being serious and that Trump merely wants photo ops with him in order to brag about his foreign policy achievements in the 2020 US presidential elections. Rouhani is well aware that his 2013 phone call with Obama paved the way for the 2015 nuclear deal, and that a meeting with the US president would play a major role in resolving Tehran-Washington disputes and sanctions issues. But Rouhani is likely not sure about Trump’s intentions and his determination to resolve the disagreements. “The meeting should be [held with certain goals]. Until we reach the conclusion that the goal we are pursuing can be realized, talks about a meeting are not right,” said Rouhani’s chief of staff, Mahmoud Vaezi, on Aug. 28. Perhaps that’s why Rouhani, according to this report on Aug. 6, refused Macron’s invitation to attend the G-7 in Paris, France, to meet with Trump and told the French president that he would prefer to save the JCPOA through European channels.

What happened to the Iran-France talks?

Statements by Iranian officials signal that Tehran-Paris negotiations are ongoing, and the officials are hopeful about reaching a deal.

Chief of Staff Vaezi said Iran is "almost making good progress" with “Europe” and announced that “an economic group” from Iran will travel to France next week.

Meanwhile, Iranian Central Bank governor Abdul-Naser Hemmati reacted on Aug. 28 to Al-Monitor’s report about Macron's proposal to Iran to establish a $15 billion credit line: “It is being negotiated, and we [will see what happens].” He noted, however, that the $15 billion credit line is not supposed to be within INSTEX, which is a European special-purpose vehicle meant to facilitate trade with Iran amid US sanctions.

It seems that the proposal for a credit line has been met with a green light by Trump, as a source who spoke on the condition of anonymity told Al-Monitor that “Zarif left Tehran for Paris because Trump and Macron had reached some agreements" — referencing what the source indicated were agreements on the credit line.

In his joint press conference Aug. 26 with Macron, Trump said: "What [Macron is] talking of in terms of compensation is they [Iran] are out of money and may need a short-term letter of credit or loan. No, we’re not paying. We don’t pay. But they may need some money to get them over a very rough patch. And if they do need money, certainly … it would be secured by the oil, which to me is great security … and they have a lot of oil … so we’re really talking about a letter of credit. … It would be from numerous countries, numerous countries."

Asked about Rouhani’s speech and whether the window of opportunity for talks is now closed, a second source who spoke on condition of anonymity told Al-Monitor, “Not true. Things are being pursued.”