Macron to press Trump on Iran diplomacy at G-7

French President Emmanuel Macron says he will present US President Donald Trump ideas for an economic incentive package to try to advance Iran diplomacy at the G-7 summit in Biarritz this weekend. 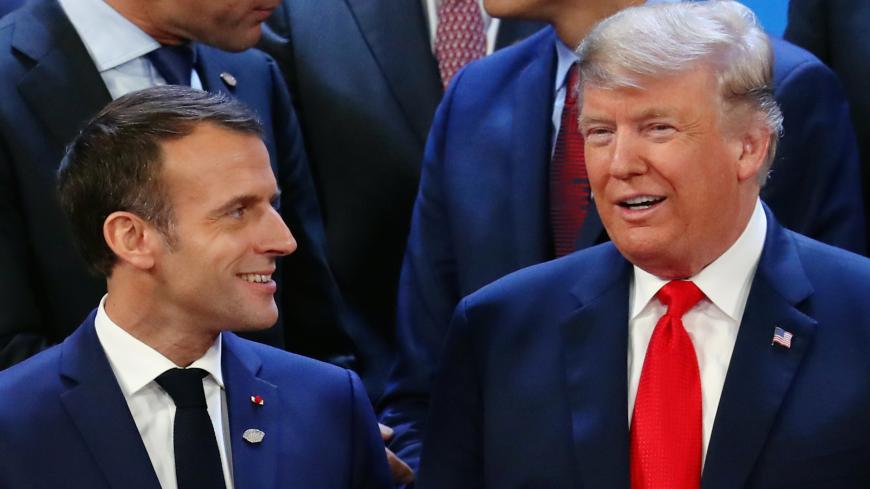 After weeks of consultations with the Iranians and the White House, French President Emmanuel Macron is expected to press US President Donald Trump for limited economic incentives at the Group of 7 summit this weekend in Biarritz, France, in an effort to try to get Iran to the table for negotiations and for there to be a return to full compliance with the 2015 Iran nuclear deal and a halt to provocations in the Persian Gulf.

But while Trump has long said he would like to make a new deal with Iran, the White House has given little indication, at least publicly, that it is receptive to such ideas for how to launch a diplomatic process or willing to show any flexibility in its maximum pressure campaign against the Islamic Republic.

“We have made proposals either for a softening of sanctions or a compensation mechanism to enable the Iranian people to live better,” Macron told reporters Wednesday.

“We shall see what the response from the Iranians is in the hours ahead,” Macron said. “And we shall see how the Americans are ready to move forward.”

Iranian Foreign Minister Mohammad Javad Zarif expressed openness to the French mediation efforts, and said he was looking forward to discussing their ideas at meetings with Macron and French Foreign Minister Jean-Yves Le Drian in Paris on Friday.

“There are proposals on the table, both from the French and the Iranian side, and we are going to work on those proposals tomorrow,” Zarif said at the Norwegian Institute of International Affairs on Thursday. “I’m looking forward to having a serious conversation with President Macron about possibilities to move forward.”

Macron said he also discussed Iran at the top of the agenda when he met Monday with Russian President Vladimir Putin in Bregancon, France.

“I believe we are both committed to a deescalation of the Iran situation,” Macron said ahead of meeting Putin. “We have worked hard in recent weeks precisely to avoid any deflagration, and have made multiple proposals. I have also had many discussions with President Trump, [Iranian] President [Hassan] Rouhani and several others, and we are of course committed both to full respect for the 2015 Joint Comprehensive Plan of Action (JCPOA) and to having a wider agenda for stability and security across the region.”

France is seeking Trump’s green light to restore waivers for Iran to export oil to some purchasers for some limited amount of time to permit negotiations to take place, diplomats and experts said.

A European official, speaking not for attribution, described this idea as involving a limited amount of time for a limited negotiation with limited incentives, for testing the waters. He added that officials do not believe pressure on Iran will by itself bring the Iranians to surrender.

The French “are pushing forward this diplomatic process,” Ellie Geranmayeh, an Iran expert at the European Council on Foreign Relations, told Al-Monitor, mentioning Zarif's Friday meeting with Macron is following a series of long telephone calls between Macron and Rouhani in recent weeks. “The idea at the G-7 summit is Macron directly with Trump will try to get the green light for these discussions to continue and move forward at the UN General Assembly.”

Macron’s statement Wednesday “basically said they are focusing their efforts on an economic package for Iran in return for full compliance on the JCPOA, and will entail in part easing the US sanctions restrictions on Iran oil exports at least temporarily to push forward a political track, in addition to basically commitments from the European partners and other EU governments as well,” Geranmayeh said.

“I think it will be a multipronged economic package,” Geranmayeh said of the French proposal. “Part of it will have to entail at least temporary waivers from the US for certain countries to purchase Iranian oil. And this will not take Iran up to the level to when the US was in the deal. But the bottom line is to over a million barrels per day through these waivers. If I were to bet, the waivers will have to go to Asian economies — India, Japan, South Korea (possibly China). … So that is one part of it.”

“I think this is a very, very high bar,” Geranmayeh said. “It is difficult to envisage much scope for flexibility on the US side.” This will particularly be the case, she added, if Trump’s hard-line national security adviser John Bolton, who will accompany Trump to the G-7, “has the last word on this. Maybe in the course of the G-7, Macron can appeal to Trump’s ego and might get the green light on some of these issues.”

The White House did not offer comment in response to queries on its possible receptiveness to Macron’s proposal. But a US official pointed to Trump’s Aug. 8 tweets, saying he knows Macron means well, but no one is authorized to speak for the United States on Iran.

Another expected part of the French proposals would be some sort of European compensation package, including a credit line. In a 100-minute Macron Rouhani phone call July 30, Macron brought up the idea of establishing a $15 billion credit line for Iran as a way to compensate for the oil Iran exported to Europe before the US withdrew from the nuclear deal and reimposed sanctions on Iran’s oil and banking sectors, Al-Monitor’s Rohollah Faghihi previously reported.

European and Japanese mediation efforts on Iran have been frustrated by divisions within the Trump administration on Iran, said Jarret Blanc, a former US Iran nuclear deal coordinator.

“I think the [French] impression … is that there are many different uncoordinated voices in the administration,” Blanc, now with the Carnegie Endowment for International Peace, told Al-Monitor, noting that on the eve of when Japanese Prime Minister Shinzo Abe traveled to Iran in June with a message from Trump, Bolton announced new US sanctions on Iran’s petrochemical sector. “They [the French] were deeply concerned about being screwed by the disorder of the [US] policy process.”

Le Drian responded sharply earlier this month to a Trump tweet saying Macron did not speak for the United States on Iran in what some observers interpreted as churn from internal US administration disagreements on Iran mediation efforts.

“Heightened tensions require political initiatives to restore conditions for dialogue,” Le Drian said in the statement defending French mediation efforts. “That is what President Macron is doing, in full transparency. … He is, of course, keeping the US authorities informed. All efforts must be brought together to avoid this conflictual situation from turning into a dangerous confrontation.”

Noting that Macron’s diplomatic adviser Emmanuel Bonne met with Bolton last week and that Bolton will accompany Trump to the G-7 this weekend, Blanc said there may be a logic to that. “My guess is that nobody will succeed” in persuading the Trump administration to ease off maximum pressure to try to get to Iran negotiations or Iranian concessions, Blanc said. “I don’t think you can sweet-talk Bolton into something.” However, he noted that Bolton, when he served as undersecretary of state for arms control during the George W. Bush administration, traveled to France more than any other country, and seems to have a soft spot for France.

“I am skeptical,” Blanc said of whether Bolton would be amenable to a proposal to get to the kind of talks with Iran that Trump says he wants. “Can he prevent it? No, probably not. Will he do any of the work to make it happen?” Unlikely, Blanc indicated.