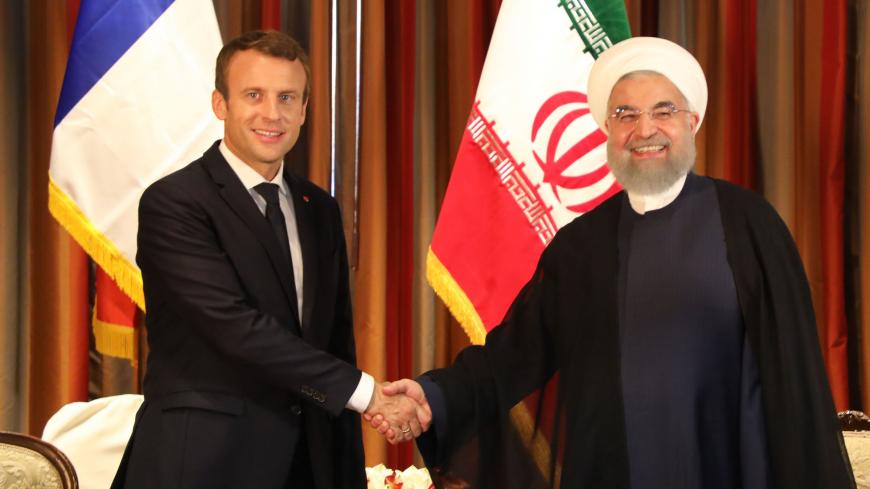 France's President Emmanuel Macron (L) shakes hands with his Iranian counterpart Hassan Rouhani during an official meeting at the Millennium Hotel near the United Nations on Sept. 18, 2017, in New York. - LUDOVIC MARIN/AFP/Getty Images

France’s top diplomat on Friday defended his nation’s efforts to reduce tensions with Iran, a day after US President Donald Trump took to Twitter to say the French president doesn’t speak for the United States on Iran.

Analysts said Trump’s comments could reflect efforts by Trump’s hawkish advisers to undermine French mediation efforts to try to reduce friction in the Persian Gulf and get Iran to reverse recent steps to reduce compliance with the 2015 nuclear deal.

French President Emmanuel Macron had been expected to present Trump with a potential package to de-escalate tensions with Iran on the sidelines of the G-7 summit that Macron is due to host in Biarritz, France, August 24-26, said Ali Vaez, director of the Iran program at the International Crisis Group.

“My sense is that this is most probably another attempt by the president’s national security team to sabotage another mediation effort which has the potential to de-escalate tensions between Iran and the US,” Vaez told Al-Monitor, recalling that the US announced new petrochemical sanctions on Iran just before Japanese Prime Minister Shinzo Abe traveled to Iran in June with a message from Trump, “basically burning that initiative before it even began,” Vaez said.

“My understanding is President Macron was planning to present Trump with a potential package on the sidelines of the G-7 meeting in France later this month,” Vaez said, noting that Macron has been talking with Iranian President Hassan Rouhani at length every week, as well as frequently with Trump, in recent weeks. “And I see this mostly as [US national security adviser John] Bolton and [US Secretary of State Mike] Pompeo playing on the president’s natural aversion to multilateral diplomacy to try to sabotage Macron’s initiative.”

In an unusually direct rebuke, French Foreign Minister Jean-Yves Le Drian said in a statement Friday that France speaks for itself on Iran and does not require permission from anyone to do so. France has kept its European partners and US officials continuously abreast of its diplomatic consultations with Iran to try to avert conflict, he said.

“On Iran, France speaks with total sovereignty,” Le Drian said in an English translation of his statement sent by the French Embassy on Friday. The statement continued, “France is strongly committed to peace and security in the region and commits to enabling de-escalation. France requires no authorization to do so.”

Le Drian indicated the French will not be deterred by Trump’s insults from continued mediation efforts to avert a wider conflict.

“Heightened tensions require political initiatives to restore conditions for dialogue,” Le Drian’s statement continued. “That is what President Macron is doing, in full transparency. … He is, of course, keeping the US authorities informed. All efforts must be brought together to avoid this conflictual situation from turning into a dangerous confrontation.”

The French statement is quite bold and shows increasing confidence that it can afford to push back on Trump, said Ellie Geranmayeh, an Iran expert with the European Council on Foreign Relations.

“The French are saying basically, ‘We don’t need a permission slip to talk to the Iranians. In any case, we have been keeping you informed. In any case, we are trying to clean up your mess before you start another war,’” she characterized the minister’s statement.

Of Trump’s Macron/Iran tweets, she surmised it could be another example of Trump’s hawkish advisers trying to spoil the Macron mediation track, “particularly if they are seeing potential results from that outreach."

But it could also be, Geranmayeh mused, that Trump may not want Macron to steal the show on any potential diplomatic summitry with the Iranians, potentially at the UN General Assembly opening session in September.

“Macron has been having longer and longer calls with Rouhani,” Geranmayeh said. She added, “And it’s very clear to me that the French in the run-up to the UN General Assembly are trying to have a major diplomatic [push] with both Trump and Tehran for any path out of the situation before things become really thorny in the Strait of Hormuz.”

“We’ve seen this before. Trump loves to be in the limelight,” she said. “If he got a sense of Macron now being at the forefront of these talks rather than acting as a middle man and mediator, it could be Trump’s temperament to undermine those efforts,” she added.

While Trump implied in his tweets that Iran was getting mixed messages from various intermediaries, analysts said the bigger problem is the conflicting messages coming from different actors in the Trump administration itself about Iran.

In Macron’s consultations with the Iranians and Trump, Trump has expressed willingness to consider a longer-term waiver period to give diplomacy a chance, analysts told Al-Monitor. But some of Trump’s advisers, like Bolton, have argued for just a one-month waiver.

“Trump seems to be OK with a longer-term waiver period for genuine diplomacy, then [he] gets push back … [from hawkish advisers] that the Iranians are almost cracking and on their knees,” Geranmayeh said, adding, “Unfortunately, on a number of major issues the president has sided with the more hawkish voices in the administration.”

“What comes out of Washington is highly confusing to the Iranians,” Vaez said. “On the one hand, the president talks about unconditional negotiations, whereas Pompeo and Bolton emphasize that serious negotiations will not occur before Iran becomes a ‘normal country.’”

With an administration so internally divided, de-escalation with Iran may require “an intermediary who can put together a package that would usher in some kind of tactical detente and which could eventually bring both sides to the negotiating table,” Vaez said, adding that Macron may be looking to the UN General Assembly in New York for an opportunity to try to bring Trump and the Iranians together.

Vaez said, “The more important milestone is the UN General Assembly in September … although I think everyone understands that the president [Trump] is primarily interested in summitry … and anything that amounts to theatrics is something that a mediator cannot overlook."