The United States and Europe continue to be divided on Iran, with points of contention including how to react to the Iran protests and how the United States has doubled down on pressure after the Soleimani killing. 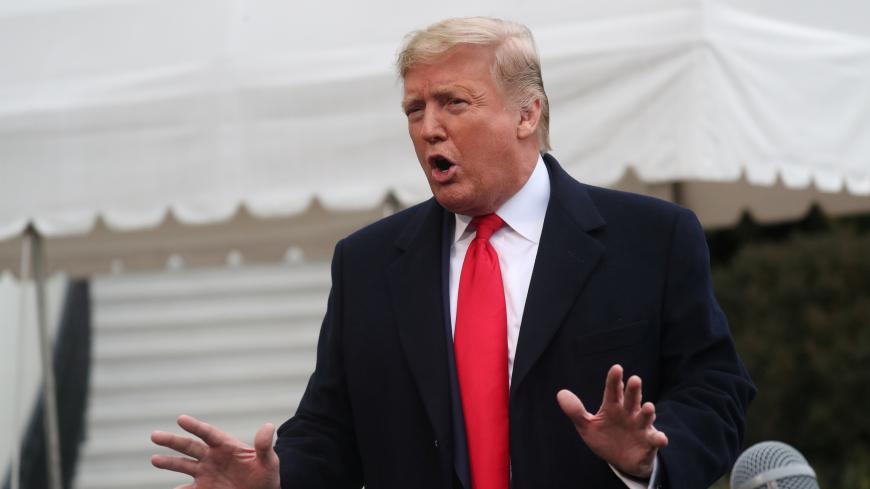 US President Donald Trump speaks to reporters as he departs for travel to New Orleans, Louisiana, from the South Lawn of the White House in Washington, Jan. 13, 2020. - REUTERS/Leah Millis

Leaders of three European powers on Sunday expressed continued support for the 2015 Iran nuclear deal, rebuffing an explicit call by President Donald Trump last week to abandon the troubled accord. The Europeans signaled that they could soon invoke a dispute resolution mechanism under the accord after a series of steps by Iran to reduce its commitments to the deal to protest the resumption of harsh economic sanctions imposed after the Trump administration quit the deal in 2018.

The European rejection of the American presidential demand marked the latest sign of a deepening transatlantic rift on Iran, as European hopes that it could broker some sort of US-Iran detente to get through the 2020 US election year without a new Middle East conflict fade. This has been exacerbated by differing Trump administration and European assessments of recent protests in Iran, including those expressing anger at the government in Tehran in the wake of Iran's admission that it accidentally shot down Ukrainian International Airlines Flight 752, killing all 176 people aboard.

Trump on Sunday newly expressed indifference to the prospect of Iran coming back to the negotiating table, amid what analysts believe may be an informal Trump administration assessment that the recent Iran protests that started in the fall and resumed in smaller numbers over the downed Ukrainian flight pose more of a threat to regime stability than the Europeans — who have embassies on the ground in Iran — assess.

“National Security Adviser suggested today that sanctions & protests have Iran ‘choked off’, will force them to negotiate,” Trump tweeted Sunday night. “Actually, I couldn’t care less if they negotiate. Will be totally up to them but, no nuclear weapons and ‘don’t kill your protesters.’”

Trump, in remarks last Wednesday on his decision to kill Iranian Quds Force commander Qasem Soleimani at the Baghdad airport Jan. 3, explicitly called on the remaining parties to the Joint Comprehensive Plan of Action (JCPOA) to abandon the deal. “The very defective JCPOA expires shortly anyway, and gives Iran a clear and quick path to nuclear breakout,” Trump said. “The time has come for the United Kingdom, Germany, France, Russia, and China to recognize this reality. They must now break away from the remnants of the Iran deal -– or JCPOA –- and we must all work together toward making a deal with Iran that makes the world a safer and more peaceful place.”

The leaders of Britain, France and Germany issued a statement Sunday rejecting Trump’s call to pull the plug on the Iran deal, albeit without naming him, and expressing regret at the US administration’s decision to quit the JCPOA.

“Today, our message is clear: we remain committed to the JCPOA and to preserving it; we urge Iran to reverse all measures inconsistent with the agreement and return to full compliance; we call on Iran to refrain from further violent action or proliferation; and we remain ready to engage with Iran on this agenda in order to preserve the stability of the region,” the leaders of the UK, France and Germany said in the joint statement.

France, the UK and Germany — also known as the E3 — will continue to push for a diplomatic solution, believing that the Trump administration’s “pressure-only” approach toward Iran will fail to achieve the changes they all seek in Iran’s behavior, a French diplomat told Al-Monitor.

“Pressure and coercion-only will fail,” the French diplomat, speaking not for attribution, said. “Pressure plus realistic engagement may succeed.”

“We will continue … to push for a diplomatic solution and for our four pillars approach: 1) keeping the JCPOA (because there is nothing to replace it at this stage) 2) long-term issues related to the nukes 3) missiles 4) regional destabilization,” he said, adding they will do so “in parallel,” since negotiating with Iran on all the issues at once as part of a package “can only fail.”

The Europeans preferred to work with the United States to achieve some kind of JCPOA-plus, but after the Trump speech last week, “That is simply off the table,” said Markus Kaim, a German foreign policy scholar serving as a visiting fellow at the German Marshall Foundation. “We have to be realistic here.”

“Germany, France, the UK desperately want to sustain the deal, but from what we heard, there is no movement on the US side,” Kaim told Al-Monitor. He said they may therefore adopt a policy of privately considering the JCPOA “dysfunctional and dormant,” but useful to preserve, to see if it could be revived after this year's US presidential election.

If Trump wins reelection, “then it becomes evident that the JCPOA as we know it cannot continue to be the point of reference for the European Iran policy,” Kaim said.

France tried to follow up on intensive efforts by French President Emmanuel Macron to broker a Trump meeting or phone call with Iranian President Hassan Rouhani at the UN General Assembly in September, but found the Trump administration reassessing its interest in possible negotiations amid Iranian anti-government protests in the fall, said Rob Malley, a National Security Council Middle East coordinator during the Barack Obama administration.

“Macron tried [to revive the de-escalation talks] by dispatching Foreign Minister [Jean-Yves] Le Drian, but my understanding is it never got anywhere,” Malley, now the head of the International Crisis Group, told a small group of journalists Jan. 6. “The protests in Iran changed Trump’s view. … He decided, why throw the Iranians a lifeline … when they are weaker. … They changed Trump’s appetite … for a deal.”

On Dec. 7, Trump had praised Swiss-brokered negotiations that led to a US-Iran prisoner swap. “Thank you to Iran on a very fair negotiation,” he tweeted. “See, we can make a deal together!”

But he reacted harshly to the Dec. 27 killing of an Iraqi American civilian contractor and wounding of several US troops in a rocket attack at the K1 military base near Kirkuk, Iraq, ordering Dec. 29 airstrikes that killed 25 members of the Iranian-backed Kataib Hezbollah Iraqi militia. When that generated violent protests at the US Embassy in Baghdad on Jan. 31, Trump reportedly approved a military option to kill Soleimani. “This will not be a Benghazi,” Trump vowed to reporters at a New Year’s Eve celebration at his Mar-a-Lago resort in Palm Beach, Florida, shortly before Soleimani was killed.

Hopes for a European-mediated deal to get the United States and Iran back to the table have faded, but perhaps not closed off entirely, amid Iranian retrenchment following the US killing of Soleimani, said former State Department Iran nuclear deal implementation team official Richard Johnson.

“I would say, even a couple months ago, I had slightly more hope that there may be a little bit of a window for something diplomatic,” Johnson, who served for the first 18 months of the Trump administration trying to negotiate a US-E3 deal on Iran and now works for the nonprofit Nuclear Threat Initiative. He told Al-Monitor in an interview, “The Macron plan was still very much on the table, up and until the Soleimani attack.”

“I am not sure it is thrown off the table, but it is obviously a lot harder,” Johnson said. “I do not think it was the end of the line, and was hearing through channels, … that there was interest on both sides in something. The beauty of that is it would have allowed both sides to take a win. … Trump to say he increased pressure and got the Iranians to come back to the table and do talks on things more than what Obama did — Persian Gulf regional issues and also the future of the JCPOA. The Iranians to say, we resisted and basically, we are just going back to what we agreed and sanctions relief.”

“Now, my concern is that the politics in Iran are almost worse than in the US,” Johnson said. “You have this cadre of people hanging their hat on JCPOA — albeit more quietly than before." But he said the Soleimani killing has unified the Iranian population against compromise with the United States.

Ali Vaez, director of the Iran program at the International Crisis Group, was even more pessimistic about prospects for US-Iran diplomacy after the US killing of Soleimani.

“The door to diplomacy has been shut as a result of what happened,” Vaez told Al-Monitor. “I think it is no longer conceivable that Rouhani would be willing to meet with president who has ordered killing of [Soleimani]. … It is also impossible to imagine that President Trump would be willing to offer Iran significant and meaningful sanctions relief in an election year.”

“That basically means we are locked into a cycle of escalation unless a mediator can manage to convince both sides that a cease-fire is better than continuation of the status quo,” Vaez said.

While the prospect for a Macron-type grand political breakthrough has faded, the Europeans feel little choice but to try to shuttle back and forth between the United States and Iran to try to prevent a new round of escalation, and to try to provide “cooling off” periods after each round of escalation that occurs, said Ellie Geranmayeh, deputy head of the Middle East at the European Council on Foreign Relations.

“I think a lot of Europeans are scrambling to see what they can do, but it feels as if they have tested and tried every avenue of influence and exhausted a lot of the path that existed,” Geranmayeh told Al-Monitor. “But I do think it is encouraging that, despite huge amount of pressure from the US on the Europeans … the Europeans are sticking to the position that they are not going to join the US maximum pressure campaign, while I think they are definitely encouraging Iran to entertain diplomacy.”

“I don’t see now the Iranians being able to enter into very significant negotiations with the Americans until November,” Geranmayeh said, referring to the month of the US presidential elections.

“I do think that still the Rouhani government would entertain some sort of negotiations with the US side, but for a lot of the [Iranian] leadership, that prospect is now close to zero,” she said.

“If [Trump] is reelected in November, in Iran, there is going to be some hard thinking, a) can we manage this turbulent relationship with the United States for another four years, and b) do they need to find a serious diplomatic path with the Americans, particularly as the economic situation will worsen the longer this embargo is in place,” Geranmayeh said. “I have doubts about the Iranians making significant concessions without the US also making significant concessions.”