Warning about the resumption of enrichment at Iran’s underground Fordow facility, Europeans look for a diplomatic path that could get the United States and Iran back to the table, and keep the deal alive through 2020 US elections. 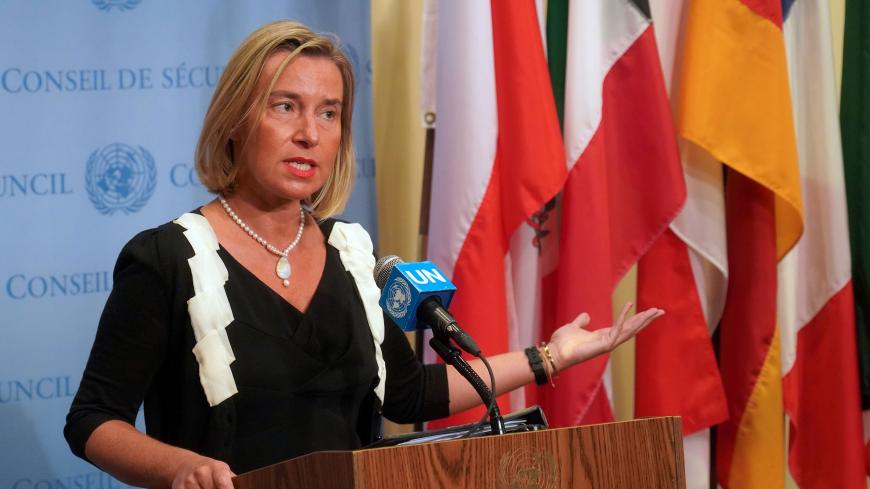 EU foreign policy chief Federica Mogherini addresses the UN press after a closed meeting with the foreign ministers of Iran China, France, Germany and Russia, and the Secretary of State of the United Kingdom, New York, September 2019. - Selcuk Acar/NurPhoto via Getty Images

Washington — Hoping to try to revive diplomatic efforts to get the United States and Iran back to the table, and to keep the 2015 nuclear deal alive through the 2020 US elections, three European powers and the European Union foreign policy chief on Monday expressed regret as the United Nations atomic watchdog agency confirmed that Iran had resumed enrichment at the underground Fordow facility.

The fortified site, built into a mountain near Qom, had been converted into a research center where no enrichment was to take place for 15 years under the 2015 accord that the Donald Trump administration withdrew from last year. But Iran announced last week that it was resuming enrichment at Fordow as the fourth step of reducing its commitments under the Joint Comprehensive Plan of Action (JCPOA) until the remaining parties to the deal — the United Kingdom, France, Germany, Russia and China — find ways to compensate Iran for the United States’ reimposition of crippling sanctions on its banking and energy sectors.

The International Atomic Energy Agency (IAEA), in a 7-page confidential report issued on Monday and seen by Al-Monitor, confirmed that Iran had resumed enrichment at Fordow on Nov. 9. The new report said that Iran’s stockpile of enriched uranium had grown to 372 kilograms (820 pounds) — which marks the addition of 130 kilograms (286 pounds) since the IAEA’s last quarterly report in late August, and exceeds a 300-kilogram (661-pound) cap on Iran’s stockpile of low enriched uranium set by the JCPOA.

The IAEA has also “detected natural uranium particles … at a location not declared to the agency,” the new IAEA quarterly report said.

“Iran’s action is inconsistent with the JCPOA’s clear provisions on Fordow and has potentially severe proliferation implications,” the foreign ministers of the United Kingdom, France, Germany — the three European countries that helped negotiate the deal, or E3 — and EU foreign policy chief Federica Mogherini said in a joint statement on Nov. 11 after 28 EU foreign ministers met in Brussels. “It represents a regrettable acceleration of Iran’s disengagement from commitments under the JCPOA."

For the first time since the deal was struck, the E3 publicly expressed concern that Iran was not providing timely cooperation to a request made by the IAEA. IAEA acting Director General Cornel Feruta called an extraordinary Board of Governors meeting on Nov. 7, and reported that an IAEA inspector had been briefly detained at Iran’s Natanz enrichment facility. Iran claimed that the inspector had tested positive for explosives and asked the IAEA to replace her with someone else.

The statement also asserted European willingness to consider triggering a dispute mechanism in the deal that if unresolved could return the Iran nuclear issue to the UN Security Council, but did not say that they were planning to do so at this time. Iran’s deputy foreign minister said over the weekend that Iran would consider the resumption of UN sanctions to be its “red line,” after which it might even withdraw from the Treaty on the Non-Proliferation of Nuclear Weapons.

"With regard to [the snapback of the sanctions] and the trigger mechanism, I think we have made it absolutely clear to all participants in the JCPOA that snapback and the return of previous resolutions [at the UN Security Council] is a red line for Iran,” Iranian Deputy Foreign Minister Abbas Araghchi said at the Moscow Nonproliferation Conference on Nov. 9, Iran’s Mehr News Agency reported.

“If Iran is put under the Chapter Seven of the UN Charter again despite all the cooperation with the IAEA and negotiations and engagement, it would mean that our ‘nuclear doctrine’ had been wrong and that we have to revise our nuclear policy and doctrine,” Araghchi said.

Iranian Foreign Minister Mohammad Javad Zarif expressed incredulity at the claim in the European statement that Europe had fulfilled all the sanctions relief it was required to under the deal.

“To my EU/E3 Colleagues: ’Fully upheld commitments under JCPOA’ YOU? Really? Just show ONE that you've upheld in the last 18 months,” Zarif tweeted today.

The new European statement signals Iran’s latest steps are now approaching its red lines, but they are still looking for a diplomatic way forward, said Ellie Geranmayeh, a top Iran and Middle East expert at the European Council for Foreign Relations.

“I think the E3 are now sending public signals that Iran is approaching its red lines,” Geranmayeh told Al-Monitor. “But clearly everyone wants to give diplomacy a chance over the coming weeks and months.”

Geranmayeh noted, “The dispute resolution mechanism is one option open to the Europeans. Another is to push for a 'JCPOA-lite' approach that keeps the architecture of the deal in place till US elections [next year], although it is not clear at this stage if Iran is open to this.”

“I basically think that this latest step is a warning shot by Iran, but there are only a handful of measures left to go before they [could] start to undo much more serious aspects of the deal, … which would be much more difficult to reverse, including steps that could begin to potentially impinge on access issues and transparency,” Geranmayeh said.

“I think … it is still manageable, but am seeing still a lot of appetite by the French and E3 to push through a diplomatic effort,” Geranmayeh noted, adding that there have been E3 consultations after the French made a significant push at the UN General Assembly in New York in September to try to advance a framework for resumed US-Iran negotiations. “It’s still clear they are dedicated to this mediation effort.”

“We stand ready to continue our diplomatic efforts to create the conditions for, and to facilitate, the de-escalation of tensions in the Middle East, in the interest of preserving international peace and security,” the E3/EU statement Monday concluded. “These efforts are however made increasingly difficult by Iran’s latest actions.”

Possible venues for a next big push for Iran mediation that would presumably include senior American and Iranian delegations might not be until early next year, such as the Davos conference in Switzerland in January or possibly the Munich Security Conference in February. But as always with Iran nuclear diplomacy, unforeseen events and national politics tend to intrude on the planned diplomatic calendar.

Iran is expected to hold parliamentary elections sometime in February.

If negotiating the JCPOA was sometimes described as trying to solve a Rubiks cube, now, the sequencing of steps for mediation to de-escalate tensions and potentially salvage the deal is also its own Rubiks cube, Geranmayeh said.

“They are trying to work out the right combination,” she noted. “Maybe the best combination is the US side takes one step first, then the Iranians take another step. … The problem is, the French and Europeans cannot guarantee that the US will carry out what he [Trump] agrees from one week to the next, until the US side carries it off.”

On Nov. 10, Trump tweeted that it would be a “very positive step” if Iran returned former FBI agent Robert Levinson, who went missing in Iran’s Kish Island in 2007. Trump, in the same tweet, also said it would be a very bad step if Iran was enriching uranium (which had been severely limited under the JCPOA that he withdrew from).

“I think the linkage between the prisoners and the nuclear issue is positive and he clearly sees a major win for himself in resolving the Levinson case,” Ali Vaez, director of Iran programs at the International Crisis Group, told Al-Monitor.

“Interestingly, [on Nov. 10] Iran’s [Ministry of Foreign Affairs] spokesperson said Iran will do everything in its power to clarify what has happened to Levinson,” Vaez said. “This might have been reported to Trump and he might have decided to give it a push.”

He added, “But the fact that he has picked the most difficult of the hostage cases isn’t too promising.”