The step by the United Kingdom, France and Germany is intended to buy time to resolve the impasse over Iran reducing its adherence to the nuclear deal to protest a lack of sanctions relief, but analysts fear it could hasten the accord’s demise. 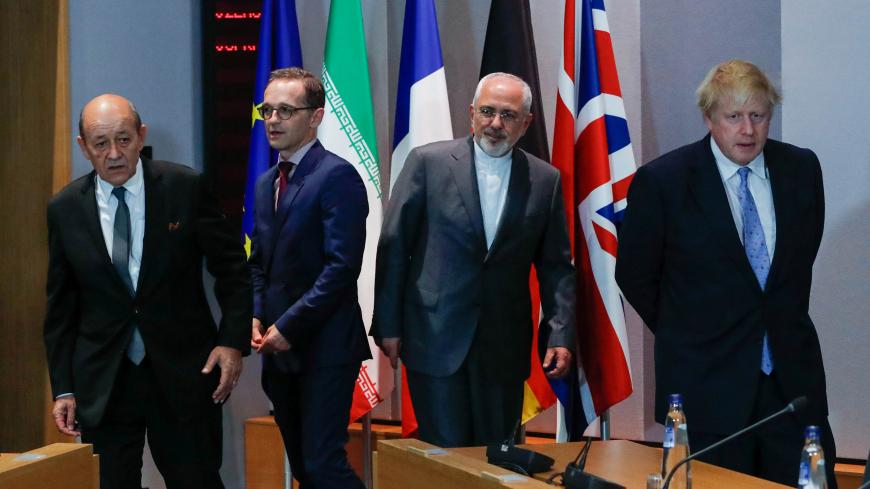 The United Kingdom, France and Germany announced today that they are triggering a dispute resolution mechanism (DRM) in the 2015 Iran nuclear deal in response to steps by Iran to reduce its compliance with the accord. Iran's move comes in protest of the US re-imposition of crippling economic sanctions.

Though the three European parties to the Joint Comprehensive Plan of Action (JCPOA) said they are triggering the DRM in sincere hope of finding a way to preserve the agreement and stressed that they are not joining the Donald Trump administration’s “maximum pressure” campaign against Iran, analysts warned the step could ultimately hasten the deal’s demise. They said it risks Iran’s eventual decision to curtail extensive monitoring and verification of its nuclear program by the International Atomic Energy Agency (IAEA) and adherence to the nuclear Non-Proliferation Treaty (NPT).

“Iran’s actions are inconsistent with the provisions of the nuclear agreement and have increasingly severe and non-reversible proliferation implications,” the foreign ministers of the United Kingdom, France and Germany said in the joint statement. “We have therefore been left with no choice, given Iran’s actions, but to register today our concerns that Iran is not meeting its commitments under the JCPOA and to refer this matter to the Joint Commission under the Dispute Resolution Mechanism.”

“We do this in good faith with the overarching objective of preserving the JCPOA and in the sincere hope of finding a way forward to resolve the impasse through constructive diplomatic dialogue, while preserving the agreement and remaining within its framework,” the ministers said. “In doing so, our three countries are not joining a campaign to implement maximum pressure against Iran. Our hope is to bring Iran back into full compliance.”

Iran responded by saying it sent letters last year to the coordinator of the JCPOA Joint Commission calling for triggering the deal’s dispute resolution mechanism over the 2018 US exit from the deal and re-imposition of harsh economic sanctions while Iran continued to meet its commitments. But it warned that eventual possible referral of Iran back to the UN Security Council for noncompliance would have dire consequences, and has previously hinted they could include exiting the NPT altogether.

If the Europeans, instead of keeping to their commitments and making Iran benefit from the lifting of the sanctions, misuse the dispute resolution mechanism, they'll need to be prepared for the consequences that they were informed about earlier, the spokesman for Iran’s Foreign Ministry said today, reported Iranian journalist Abas Aslani.

The Europeans may be trying to salvage the deal with the step, but could end up hastening its demise and risk an Iranian backlash that could end the extensive IAEA monitoring and verification of Iran’s nuclear program, several analysts said they feared.

“By triggering the DRM the E3 might provoke a crisis that they claim they are trying to prevent unless the time and space created by intense diplomatic engagement is used to provide Iran with some economic reprieve as means of returning it into JCPOA compliance,” Ali Vaez, director of Iran programs at the International Crisis Group, warned on Twitter.

“European companies could see this as a major juncture in Europe-Iran relations and potentially a route to UN [Security Council] and EU sanctions on Iran, disrupting ongoing/future trade,” tweeted Sahil Shah, policy fellow at the pro-JCPOA European Leadership Network. “And Iran’s adherence to the NPT and IAEA Additional Protocol alone makes the JCPOA worth … preserving.”

The Europeans have signaled to the Iranians that they do not intend to refer the matter to the UN Security Council but to keep the dispute at the Joint Commission, which oversees implementation of the troubled accord, said Ellie Geranmayeh, deputy Middle East director at the European Council on Foreign Relations.

“My sense is that the Europeans very clearly messaged to the Iranians that by triggering the DRM, they do not intend to take the matter to the UN Security Council,” Geranmayeh told Al-Monitor. “They are trying to find a way, a new space, in which to find a political solution for this situation. My sense is the DRM is at tool for the Europeans to buy time with Washington … but also signaling to Iran they don’t intend to go to snapback.”

“They are actually trying to buy time for Washington and Tehran to find a way out of this,” Geranmayeh said. She added, however, that “the ability of the Europeans to put anything on the table is extremely limited.”

“Alongside our partners, we will use this to press Iran to come back into full compliance with its commitments, and honour an agreement that is in all our interests,” Raab said in a statement to the House of Commons today. “This process has been explicitly designed to allow participants flexibility and full control at each and every stage.”